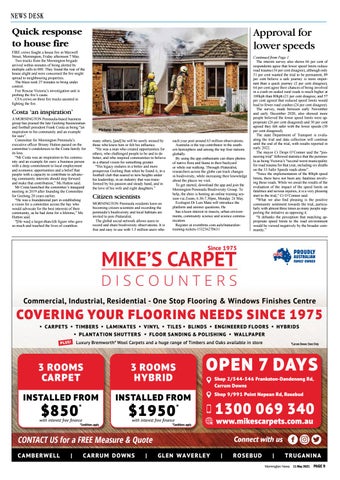 Quick response to house fire FIRE crews fought a house fire in Maxwell Street, Mornington, Friday afternoon 7 May. Two trucks from the Mornington brigade arrived within minutes of being alerted by multiple calls to 000. They found the rear of the house alight and were concerned the fire might spread to neighbouring properties. The blaze took 27 minutes to bring under control. Fire Rescue Victoria’s investigation unit is probing the fire’s cause. CFA crews on three fire trucks assisted in fighting the fire.

Costa ‘an inspiration’ A MORNINGTON Peninsula-based business group has praised the late Geelong businessman and football president Frank Costa as being “an inspiration to his community and an example for ours”. Committee for Mornington Peninsula’s executive officer Briony Hutton passed on the committee’s condolences to the Costa family for its loss. “Mr Costa was an inspiration to his community and an example for ours: a business person with a deep commitment to local employment and economic opportunities and a belief that people with a capacity to contribute to advancing community interests should step forward and make that contribution,” Ms Hutton said. Mr Costa launched the committee’s inaugural meeting in 2019 after founding the Committee for Geelong 20 years earlier. “He was a foundational part in establishing a vision for a committee across the bay who would advocate for the best interests of their community, as he had done for a lifetime,” Ms Hutton said. “[He was] a larger-than-life figure who gave so much and touched the lives of countless

Picture: Yanni many others, [and] he will be sorely missed by those who knew him or felt his influence. “He was a man who created opportunities for others, who challenged people to be and to do better, and who inspired communities to believe in a shared vision for something greater. “His legacy endures in a better and more prosperous Geelong than when he found it, in a football club that soared to new heights under his leadership, in an industry that was transformed by his passion and steady hand, and in the love of his wife and eight daughters.”

Citizen scientists MORNINGTON Peninsula residents keen on becoming citizen scientists and recording the peninsula’s biodiversity and local habitats are invited to join iNaturalist. The global social network allows users to record and share biodiversity observations. It is free and easy to use with 1.5 million users who

each year post around 63 million observations. Australia is the top contributor in the southern hemisphere and among the top four nations globally. By using the app enthusiasts can share photos of native flora and fauna in their backyard or while out walking. Through iNaturalist, researchers across the globe can track changes in biodiversity, while increasing their knowledge about the places we visit. To get started, download the app and join the Mornington Peninsula Biodiversity Group. To help, the shire is hosting an online training session via Zoom, 6.30-7.30pm, Monday 24 May. Ecologist Dr Luis Mata will introduce the platform and answer questions. He has a keen interest in insects, urban environments, community science and science communication. Register at eventbrite.com.au/e/inaturalisttraining-tickets-153256270631

Continued from Page 1 The interim survey also shows 66 per cent of respondents agree that lower speed limits reduce road trauma (16 per cent disagree), although only 51 per cent wanted the trial to be permanent; 89 per cent believe a safe journey is more important than a quick journey (2 per cent disagree); 64 per cent agree their chances of being involved in a crash on sealed rural roads is much higher at 100kph than 80kph (21 per cent disagree; and 57 per cent agreed that reduced speed limits would lead to fewer road crashes (24 per cent disagree). The survey, made between early November and early December 2020, also showed more people believed the lower speed limits were appropriate (26 per cent disagreed) and 50 per cent agreed they felt safer with the lower speeds (30 per cent disagreed). The state Department of Transport is evaluating the trial and data collection will continue until the end of the trial, with results reported in early 2022. The mayor Cr Despi O’Connor said the “pioneering trial” followed statistics that the peninsula as being Victoria’s “second worst municipality for road trauma for that year, including six deaths on the 33 Safer Speeds roads alone”. “Since the implementation of the 80kph speed limits, there have not been any fatalities involving these roads. While we await the results of the evaluation of the impact of the speed limits on fatalities and serious injuries, it is a very pleasing start to the trial,” Cr O’Connor said. “What we also find pleasing is the positive community sentiment towards the trial, particularly with almost three times as many people supporting the initiative as opposing it. “It debunks the perception that matching appropriate speed limits to the road environment would be viewed negatively by the broader community.”

Connect with us GLEN WAVERLEY