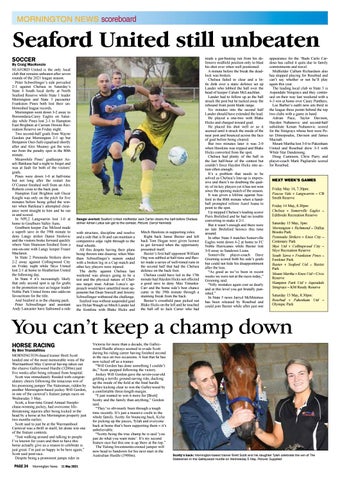 By Craig MacKenzie SEAFORD United is the only local club that remains unbeaten after seven rounds of the 2021 league season. Peter Schwellinger’s side prevailed 2-1 against Chelsea in Saturday’s State 4 South local derby at North Seaford Reserve while State 1 leader Mornington and State 3 pacesetter Frankston Pines both lost their unblemished league records. Mornington went down 3-2 away to Boroondara-Carey Eagles on Saturday while Pines lost 2-1 to Hampton East Brighton at Carrum Downs Recreation Reserve on Friday night. Two second-half goals from Wayne Gordon put Mornington 2-1 up but Benjamin Osei-Safo equalised shortly after and Alex Meaney got the winner from the penalty spot in the 80th minute. Meanwhile Pines’ goalkeeper Aeseli Batikasa had a night to forget and was at fault for both of the visitors’ goals. Pines were down 1-0 at half-time but not long after the restart Joe O’Connor finished well from an Alex Roberts cross to the back post. Hampton East Brighton sub Oscar Knight was only on the pitch for five minutes before being gifted the winner when Batikasa’s attempted clearance went straight to him and he ran in and scored. In NPL2 Langwarrin lost 1-0 at home to Goulburn Valley Suns. Goulburn keeper Zac Mcleod made a superb save in the 59th minute to deny Langy striker Damir Stoilovic and the visitors broke forward quickly where Vani Shamoon finished from a one-on-one with Langy keeper Fraser Maclaren. In State 2 Peninsula Strikers drew 2-2 away against Collingwood City on Friday night while Skye United lost 2-1 at home to Heatherton United the following day. In State 4 it’s increasingly likely that only second spot is up for grabs in the promotion race as league leader Noble Park United firms into odds-on favouritism for the title. And Seaford is in the chasing pack. Peter Schwellinger and assistant Andy Lancaster have fashioned a side

with structure, discipline and resolve and a side that is fit and can maintain a competitive edge right through to the final whistle. All this despite having their plans being thrown into disarray when Matthais Schwellinger’s season ended with a broken leg in a Cup match and other key players were injured. The derby against Chelsea last weekend was always going to be a test and the physical nature of Chelsea target man Adrian Lotca’s approach would have unsettled most opponents but Dean Snoxell and Jeremy Schwellinger withstood the challenge. Seaford was without suspended goal ace Dylan Waugh so Mitch Lander led the frontline with Blake Hicks and

Mitch Hawkins in supporting roles. Right back Jamie Baxter and left back Tom Hogan were given licence to get forward when the opportunity presented itself. Baxter’s first half opponent William Ong was subbed at half-time and Baxter made a series of well-timed runs in the second half that had the Chelsea defence on the back foot. Chelsea could have led in the 17th minute had Hayden Hicks not effected a good save to deny Max TimuskaCarr and the home side’s best chance came in the 39th minute through a stunning break from the back. Baxter’s crossfield pass picked out Blake Hicks on the left and he touched the ball off to Jack Carter who had

made a gut-busting run from his defensive midfield position only to blast his shot over when well positioned. A minute before the break the deadlock was broken. Chelsea failed to clear and a little dink over a static defence set up Lander who lobbed the ball over the head of keeper Calum McLauchlan. Lander had to follow up as the ball struck the post but he tucked away the rebound from point blank range. Six minutes into the second half Lander should have extended the lead. He played a one-two with Blake Hicks and charged toward goal. He placed his shot well or so it seemed until it struck the inside of the near post and bounced across the face of goal before being cleared. But two minutes later it was 2-0 when Hawkins was tripped and Blake Hicks converted from the spot. Chelsea had plenty of the ball in the last half-hour of the contest but couldn’t force Hayden Hicks into action often enough. It’s a problem that needs to be solved as Chelsea’s line-up is impressive and there’s no doubting the quality of its key players yet it has not won since the opening match of the season. It was given a lifeline against Seaford in the 80th minute when a handball prompted referee Aurel Ioana to point to the spot. Up stepped Chelsea’s leading scorer Piers Brelsford and he had no trouble converting to make it 2-1. But it wasn’t enough and there were no late Brelsford heroics this time around. In other State 4 matches Somerville Eagles went down 4-2 at home to FC Noble Hurricanes while Baxter lost 3-0 away to Sandown Lions. Somerville player-coach Dave Greening scored both his side’s goals but could not hide his disappointment after the loss. “As good as we’ve been in recent weeks we were not at the races today,” Greening said. “Silly mistakes again cost us dearly and at this level you get brutally punished.” In State 5 news Jarryd McMinimee has been released by Rosebud and could join Baxter while after just one

appearance for the ‘Buds Carlo Cardoso has called it quits due to family commitments and travel. Midfielder Callum Richardson also has stopped playing for Rosebud and can’t say whether or not he’ll play again this year. The leading local club in State 5 is Aspendale Stingrays and they continued on their way last weekend with a 4-3 win at home over Casey Panthers. Lee Barber’s outfit now sits third in the league three points behind the top two clubs with a game in hand. Adrian Pace, Taylor Davison, Hayden Nuhanovic and second-half substitute Kenan Nuhanovic scored for the Stingrays whose best were Peter Dimopoulos, Davison and James Macnab. Mount Martha lost 3-0 to Pakenham United and Rosebud drew 3-3 with White Star Dandenong. Doug Cunnison, Chris Parry and player-coach Mark Pagliarulo scored for Rosebud.

You can’t keep a champ down HORSE RACING

By Ben Triandafillou MORNINGTON-based trainer Brett Scott landed one of the most memorable wins of the Warrnambool May Carnival having taken out the elusive Galleywood Hurdle (3200m) just five weeks after being released from hospital. Scott was immediately flooded with congratulatory cheers following the tenacious win of his promising jumper The Statesman, ridden by another Mornington-based jockey Will Gordon, in one of the carnival’s feature jumps races on Wednesday 5 May. Scott, a four-time Grand Annual Steeplechase-winning jockey, had overcome lifethreatening injuries after being kicked in the head by a horse at his Mornington property just two months earlier. Scott said to just be at the Warrnambool Carnival was a thrill in itself, let alone win one of the feature contests. “Just walking around and talking to people I’ve known for years and then to have this horse actually give us a reason to celebrate is just great. I’m just so happy to be here again,” Scott said post-race. Despite being a prominent jumps rider in

Victoria for more than a decade, the Galleywood Hurdle always seemed to evade Scott during his riding career having finished second in the race on two occasions. A feat that he has now ticked off as a trainer. “Will Gordon has done something I couldn’t do,” Scott quipped following the victory. Jockey Will Gordon gave the seven-year-old gelding a terrific ground-saving ride, ducking up the inside of the field at the final hurdle before kicking clear to win the Galleywood by a comfortable three-length margin. “I just wanted to win it more for [Brett] Scotty and the family than anything,” Gordon said. “They’ve obviously been through a tough time recently. It’s just a massive credit to the whole family. Scotty for bouncing back, Kylie for picking up the pieces, Tylah and everyone back at home that’s been supporting them – it’s unbelievable. “Scotty being the true champ he is said ‘you just do what you want mate’. It’s my second feature race but this one is up there at the top.” The Yulong Investments-owned jumper will now head to Sandown for his next start in the Australian Hurdle (3900m).

Scotty’s back: Mornington-based trainer Brett Scott and his daughter Tylah celebrate the win of The Statesman in the Galleywood Hurdle on Wednesday 5 May. Picture: Supplied