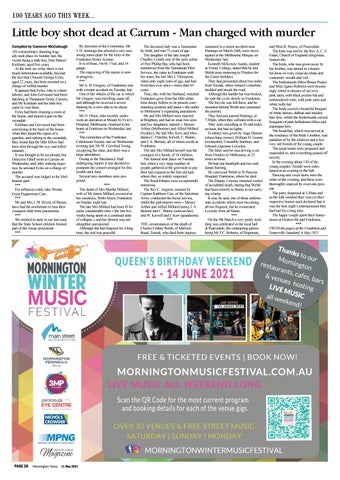 Little boy shot dead at Carrum - Man charged with murder Compiled by Cameron McCullough AN extraordinary shooting tragedy took place on Sunday last, the victim being a little boy, Don Marcel Kirkham, aged five years. At the time we write, there is not much information available, beyond the fact that Clement George Eyles, aged 22 years, has been arrested on a charge of willful murder. It appears that Eyles, who is a farm laborer, and John Gervasoni had been batching at Thompson Street, Carrum, and Mr Kirkham and his little boy came to visit them. Eyles had been cleaning a room at the house, and placed a gun on the verandah. Kirkham and Gervasoni had been conversing at the back of the house, when they heard the report of a gunshot, and rushing to the verandah, they found that the little fellow had been shot through the eye, and killed instantly. It was thought to be accidental, but Detective Ethell went to Carrum on Wednesday, and, after making inquiries, he arrested Eyles on a charge of murder. The accused was lodged in the Melbourne gaol. *** For influenza colds, take Woods Great Peppermint Cure. *** Mr and Mrs J. M. Rivett, of Baxter, have had the misfortune to lose their youngest child from pneumonia. *** We omitted to state in our last issue that the State School children formed part of the Anzac procession. ***

By direction of the Committee, Mr J. D. Jennings has selected a very nice strong name-plate for the trees in the Frankston Honor Avenue. It is of brass, 5in by 1¾in, and 14 gauge. The engraving of the names is now in progress. *** Mr A. H. Gregory, of Frankston, met with a motor accident on Tuesday last. One of the wheels of the car in which Mr Gregory was travelling came off, and although he received a severe shaking he is now able to be about. *** Mr O. Olsen, who recently underwent an operation at Mount St. Evin’s Hospital, Melbourne, returned to his home at Frankson on Wednesday last. *** The committee of the Frankston Caledonian Society met on Wednesday evening last, Mr W. Crawford Young occupying the chair, and there was a large attendance. Owing to the Mechanics’ Hall undergoing repairs it was decided to postpone the concert arranged for this month until June. Several new members were proposed. *** The death of Mrs Martha Millard, wife of Mr James Millard, occurred at her residence, Wells Street, Frankston, on Sunday night last. The late Mrs Millard had been ill for some considerable time – the last five weeks being spent in a continual state of collapse – and her demise was not altogether unexpected. Although she had lingered for a long time, the end was peaceful.

The deceased lady was a Tasmanian by birth, and was 73 years of age. The daughter of the late Joseph Chudley Codell, one of the early pilots of Port Phillip Bay who had been transferred from the Tasmanian Pilot Service, she came to Frankston with her sister, the late Mrs J. Thompson, when only eight years of age, and had lived here ever since – more than 65 years. Thus, she, with her husband, watched Frankston grow from the little olden time sleepy hollow to its present commanding position and status – the outlet to Melbourne’s expanding population. Mr and Mrs Millard were married at Brighton, and had as issue two sons and five daughters, namely – Messrs Arthur (Melbourne) and Alfred Millard (Sydney), the late Mrs. Kerr, and Mesdames C. Fletcher, Kirvell, C. Bunny, and J. A. Benson, all of whom reside at Frankston. The late Mrs Millard herself was the youngest of a family of 14 children. The funeral took place on Tuesday last, when a very large number of people gathered at the graveside to pay their last respects to the fine old lady whom they so widely respected. The floral tributes were exceptionally numerous. The Rev C. Angwin, assisted by Captain Kathleen Carr, of the Salvation Army, conducted the burial service, whilst the pall-bearers were – Messrs Arthur and Alfred Millard (sons), J. A. Benson and C. Bunny (sons-in-law) and W. Kervell and J. Kerr (grandsons). *** THE circumstances of the death of Charles Clifton Welsh, of Malvern Road, Toorak, who died from injuries

sustained in a motor accident near Hastings on March 24th, were investigated at the Melbourne Morgue on Wednesday last. Kenneth McKenzie Austin, student at Trinity College, stated that he and Welsh were motoring to Flinders for the Easter holidays. They had proceeded about two miles from Toorak, when witness’s machine skidded and struck the road. Although the handle bar was broken, he rode the cycle slowly to Frankston. The bicycle was left there, and he mounted behind Welsh and continued the journey. They had just passed Hastings, at 7.30pm, when they collided with a car. They were travelling at 30 odd miles an hour, but had no lights. Evidence was given by Aage Hansen (chara-banc owner), William H. Gomm (orchardist), Constable Stanbury and Edward Algernon Leveckie. The latter said he was driving a car from Flinders to Melbourne, at 25 miles an hour. He had one headlight and two side lamps burning. He conveyed Welsh to St Pancras Hospital, Frankston, where he died. The Deputy Coroner returned verdict of accidental death, stating that Welsh had been entirely to blame in not carrying a lamp. It was, he said, one of those unfortunate accidents which were becoming all too frequent, but he exonerated Levecke from all blame. *** On the 9th March a very pretty wedding was celebrated in the local hall at Pearcedale, the contracting parties being Mr T.C. Roberts, of Hopetoun,

and Miss R. Pearce, of Pearcedale. The knot was tied by the Rev A. C. F. Gates, Church of England clergyman, Somerville. The bride, who was given away by her brother, was attired in a beautiful dress of ivory crepe-de-chine and customary wreath and veil. The bridesmaids (Miss Bessie Pearce and Miss Agnes Roberts) were becomingly robed in dresses of net over pink satin, with black picture hat and embroidered voile, with pink satin and white tuille hat. The bride carried a beautiful bouquet of white daisies, dalhias and maiden hair fern, whilst the bridesmaids carried bouquets of pink belladonna lillies and asparagus fern. The breakfast, which was served at the residence of the bride’s mother, was partaken of by the relatives and a few very old friends of the young couple. The usual toasts were proposed and responded to, and everything passed off merrily. In the evening about 130 of the young couples’ friends were entertained at an evening in the hall. Dancing and vocal items were the order of the evening, and these were thoroughly enjoyed by everyone present. The party dispersed at 3.30am and as the folk wended their ways to their respective homes each declared that it was the best night’s entertainment they had had for a long time. The happy couple spent their honeymoon at Healesville and Frankston. *** FROM the pages of the Frankston and Somerville Standard, 6 May 1921

MORNINGTONMUSICFESTIVAL.COM.AU LIVE MUSIC ALL WEEKEND LONG Scan the QR Code for the most current program and booking details for each of the venue gigs. OVER 20 VENUES & FREE STREET MUSIC SATURDAY | SUNDAY | MONDAY