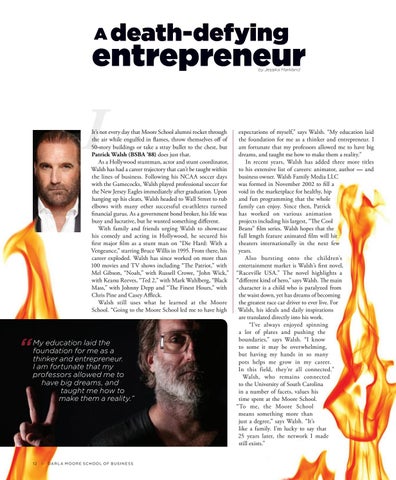 It’s not every day that Moore School alumni rocket through the air while engulfed in flames, throw themselves off of 50-story buildings or take a stray bullet to the chest, but Patrick Walsh (BSBA ’88) does just that. As a Hollywood stuntman, actor and stunt coordinator, Walsh has had a career trajectory that can’t be taught within the lines of business. Following his NCAA soccer days with the Gamecocks, Walsh played professional soccer for the New Jersey Eagles immediately after graduation. Upon hanging up his cleats, Walsh headed to Wall Street to rub elbows with many other successful ex-athletes turned financial gurus. As a government bond broker, his life was busy and lucrative, but he wanted something different. With family and friends urging Walsh to showcase his comedy and acting in Hollywood, he secured his first major film as a stunt man on “Die Hard: With a Vengeance,” starring Bruce Willis in 1995. From there, his career exploded. Walsh has since worked on more than 100 movies and TV shows including “The Patriot,” with Mel Gibson, “Noah,” with Russell Crowe, “John Wick,” with Keanu Reeves, “Ted 2,” with Mark Wahlberg, “Black Mass,” with Johnny Depp and “The Finest Hours,” with Chris Pine and Casey Affleck. Walsh still uses what he learned at the Moore School. “Going to the Moore School led me to have high

My education laid the foundation for me as a thinker and entrepreneur. I am fortunate that my professors allowed me to have big dreams, and taught me how to make them a reality.”

expectations of myself,” says Walsh. “My education laid the foundation for me as a thinker and entrepreneur. I am fortunate that my professors allowed me to have big dreams, and taught me how to make them a reality.” In recent years, Walsh has added three more titles to his extensive list of careers: animator, author — and business owner. Walsh Family Media LLC was formed in November 2002 to fill a void in the marketplace for healthy, hip and fun programming that the whole family can enjoy. Since then, Patrick has worked on various animation projects including his largest, “The Cool Beans” film series. Walsh hopes that the full length feature animated film will hit theaters internationally in the next few years. Also bursting onto the children’s entertainment market is Walsh’s first novel, “Raceville USA.” The novel highlights a “different kind of hero,” says Walsh. The main character is a child who is paralyzed from the waist down, yet has dreams of becoming the greatest race car driver to ever live. For Walsh, his ideals and daily inspirations are translated directly into his work. “I’ve always enjoyed spinning a lot of plates and pushing the boundaries,” says Walsh. “I know to some it may be overwhelming, but having my hands in so many pots helps me grow in my career. In this field, they’re all connected.” Walsh, who remains connected to the University of South Carolina in a number of facets, values his time spent at the Moore School. “To me, the Moore School means something more than just a degree,” says Walsh. “It’s like a family. I’m lucky to say that 25 years later, the network I made still exists.”

The alumni magazine for the Darla Moore School of Business at the University of South Carolina.