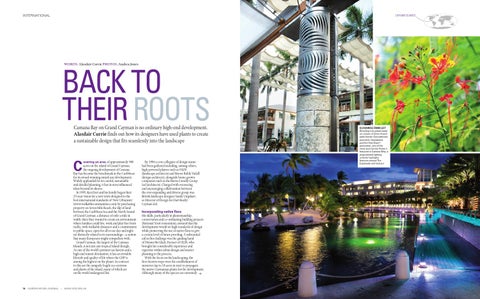 Back to their roots Words: Alasdair Currie Photos: Andrea Jones

Camana Bay on Grand Cayman is no ordinary high-end development. Alasdair Currie finds out how its designers have used plants to create a sustainable design that fits seamlessly into the landscape

overing an area of approximately 500 acres on the island of Grand Cayman, the ongoing development of Camana Bay has become the benchmark in the Caribbean for its award-winning mixed-use development. Widely applauded for its careful, sustainable and detailed planning, it has in turn influenced ideas beyond its shores. In 1995, Ken Dart and his family began their 25-year vision for a new town designed to the best international standards of ‘New Urbanism’ (www.walkablecommunities.com) by purchasing property on Seven Mile Beach, the slip of land between the Caribbean Sea and the North Sound of Grand Cayman, a distance of only a mile in width. Here they wanted to create an environment where families could live, work and play free from traffic, with walkable distances and a commitment to public space, open for all to use day and night yet distinctly related to its surroundings – a notion that many Europeans might sympathise with. Grand Cayman, the largest of the Cayman Islands, is not just any tropical island though. As one of the world’s premier tax havens and a high-end tourist destination, it has an enviable lifestyle and quality of life where the GDP is among the highest on the planet. In contrast to this are the uniquely fragile eco-systems and plants of the island, many of which are on the world endangered list.

By 1996 a core collegiate of design teams had been gathered including, among others, high-powered players such as Olin (landscape architects) and Moore Ruble Yudell (design architects), alongside home-grown companies such as the Burns Conolly Group Ltd (architects). Charged with overseeing and encouraging collaboration between the ever-expanding and diverse group was British landscape designer Sandy Urquhart, as Director of Design for Dart Realty Cayman Ltd.

His skills, particularly in plantsmanship, conservation and co-ordinating building projects (National Trust restoration), ensured that the development would set high standards of design while pioneering the use of native flora to give a certain level of future proofing. A substantial aid in this challenge was the guiding hand of Dennis McGlade, Partner of Olin, who brought his considerable experience and expertise within urban design and master planning to the process. With the focus on the landscaping, the first decisive steps were the establishment of nurseries (up to 18 acres in size) to propagate the native Caymanian plants for the development. Although many of the species are extremely

Clockwise from left Detailing in brushed metal on column of Silver thatch palm fronds (Coccothrinax proctorii); Caesalpinia pulcherrima (Dwarf poinciana), one of the many spectacular flowers featured in Camana Way; a programmed lighting scheme highlights features around The Esplanade and harbour

slow growing, they have, of course, the natural ability to cope with the island’s particular climatic and environmental conditions such as sea salt spray, porous limestone bedrock, thin soils, tropical temperatures and forceful trade winds. An illustration of this was in September 2004 when Hurricane Ivan hit Grand Cayman, damaging over three-quarters of all homes and sending a storm surge inland, flooding many areas. This proved less disastrous to native flora, which recovered more quickly. Cultivation of native plants on this scale had never been attempted before in the Cayman Islands in part because of slow growth rates and a shortage of trained horticulturalists or horticultural tradition, but also the plants lacked fashionability compared with imported counterparts. Importation of non-native and fast-growing ‘exotic’ flora had become the normal in the Cayman Islands as elsewhere. As Sandy explains: “Coccothrinax proctorii (Silver thatch palm) grows all over the island. The problem is it grows in urban areas where it never gets the chance to reseed. For it to reach a 6m elevation, you are looking to wait at least 50-60 years.”

Initially, however, the core group of plants were grown together in the nurseries of Homestead, Florida (Homestead has a large cluster of specialist tropical plant nurseries), before being shipped en masse to Grand Cayman for propagation, thereby reducing the irreversible incidence of importing disease or pests (this became the largest plant purchase in the history of Homestead).

To cope with this influx, a small army of local people and specialists were recruited and trained to tend the plants to the highest professional standards (the use of Latin plant names was strictly enforced with common names forbidden). A spin-off from this ethos has been the sense of community ownership towards the development

and the notion of horticulture as a respected profession. ‘Garden maintenance’ exists in the islands, of course, but this in no way ensures that any level of understanding regarding native flora is prevalent, nor that species are cared for and protected. Dennis McGlade points out: “Garden maintenance is the bane of every landscape architect in the United States. There is no garden tradition like there is in England or Western Europe, unless the garden owner employs a graduate of the University of Delaware or the Longwood Program. Those are

the only two programs that I know of that produce gardeners that could take over the great estates of Europe. But, also, it is important to have a design eye and not just the ability to care for a plant. To know what to substitute and replace in an overall scheme is key.” To that end, the team is to be commended for its long-term commitment to ensuring levels of plant care remain the best they can be. The complex or town centre of Camana Bay is a series of interconnecting courtyards linking to a main street, The Paseo. With an east-west axis, the wind tunnel-tested

Clockwise from top left Coral stone steps lead up from the harbour; art is important in the complex, as with these specially created bubble benches by OLIN at Jasmine Court; the boardwalk leads through the Seasonally Flooded, Brackish Woodland of Camana Way past Thrinax radiata (Bull thatch palm) and Conocarpus erectus (Buttonwood)

buildings have been positioned towards prevailing northeasterleys, thereby channelling breezes to act as a natural cooling aid. Pedestrianised streets are lined with mechanical awnings and shade-giving trees including palms Roystonea regia (Royal palm), the largest examples in the islands, Coccothrinax proctorii (Silver thatch palm) and Swietenia mahagoni (native West Indian mahogany). Overall the theme is marine meeting landfall. Coloured block pavers are used in The Paseo, creating wave patterns that flow through the streets. Here, also, the largest mosaic in the Caribbean, depicting

“it is important to have a design eye and not just the ability to care for a plant. To know what to substitute and replace in an overall scheme is key”

Clockwise from below The Crescent’s programmed fountain display; planting and stone fountains in Canella Court; a green wall of Bromeliads in Cassia Court; frequent signage makes it easy to get around the complex

the famous ‘Bloody Wall’ diving site off Little Cayman, covers the walls of the 23m Observation Tower from the ground to the top floor. From this vantage point viewers can appreciate the themes, details and the commitment to public space (25%, in fact, of the overall site). Where one might expect to see ventilation towers or air-conditioning units dotting rooflines, clever use of natural ventilation and cooled water renders these either non-existent or hidden within the buildings’ designs.

Art and beauty, whatever the weather

A commitment to public art is also evident. Lighting engineers were employed to create unique lamps as artworks in their own right with details of plants or marine life. By the cinema entrance, Olin developed a series of colourful and unique plexiglas bubble benches, positioned in the shade of a giant awning, to entice people to sit and observe. The peaceful courtyards, all named after plants such as Canella or jasmine, are distinctly different through their planting schemes or water features. Lastly, at the east end of The Paseo are The Esplanade and The Crescent, a relaxed, palm-shaded grassy park overlooking the bay, with outdoor restaurants, boardwalks and

a computer-controlled fountain “engineered to look beautiful in almost any weather condition,” points out Sandy. The services for these buildings are hidden out of sight. A series of tunnels ensure that deliveries to shops or restaurants remain unseen, minimising disturbance or pollution. The bay itself has finger piers for watercraft accessed via a man-made island and, here on the island’s edge, carefully managed red mangrove has successfully taken root and begun to colonise. Emphasising once more the commitment to plant conservation and education is the boulevard Camana Way. Acting as the main link between the tourist bustle of Seven Mile Beach and Camana Bay, a pedestrianised walkway leads the viewer along a central

reservation and through the five distinct eco-systems of Grand Cayman. ‘Sandy Beach’ gives way to ‘Sandy Woodland’. ‘Limestone Woodland’ to ‘Moist Woodland’ and, finally, ‘Seasonally Flooded, Brackish Woodland’. Again, the planting is predominantly native and highlights include endangered endemic species such as Myrmecophila thomsoniana (Wild banana orchid), Argusia gnaphalodes (Sea lavender) or Coccothrinax proctorii. All of this and more is listed and illustrated in a handy portable booklet designed by Olin, The Camana Way Plant Book, available to purchase in the development. Camana Bay has been positioned to serve all residents of the Cayman Islands’ diverse community yet has its roots firmly in the ‘Ironshore’ (limestone) of the islands.