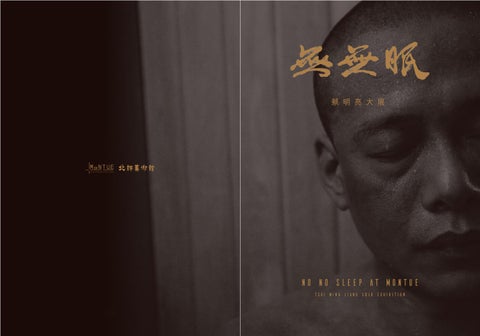 No No Sleep at MoNTUE Tsai Ming Liang SolO Exhibition

影片介紹：無無眠 Introduction to film: NO no Sleep

影片介紹：西遊 Introduction to film: Journey To The West

This is not the first time,

and it will certainly not be the last.

Watching TSAI's films in a museum?

What is it all about?

TSAI said that he wishes to have the museum completely empty.

I said of course.

Who says art museums have to be installed with art pieces.

This time, the museum will only open when night falls.

Who says museums have to be a conventional nine-to-five?

You can sleep here, dream here, or simply be here.

Watching films in a museum? What is it all about?

That is for you to answer.

LIN Mun-Lee has once again invited me to the MoNTUE.

one-time event, that TSAI Ming-Liang's films should become a regular in the museum.

Lee Kang-Sheng meanders in Tokyo and Masanobu Ando is completely

nude in No No Sleep.

Autumn Days is a documentary on Akira Kurosawa's long-time screenwriting collaborator Teruyo Nogami, an 88-year-old lady who sits in a

cinema enjoying one of my other films Journey to the West.

with big close-ups of Denis Lavant.

I’ve long admired Lavant when I saw his performance in The Lovers on the Bridge back in college. I want to put up four names in big letters in front of the museum:

For this one-month exhibition, I proposed to have the museum open at night and stay open on Mondays. I'd like to host a sleepover on Friday and Saturday nights,

open up the entire museum

for everyone to sleep here and watch my films.

at the Cannes Film Festival, as well as the Jury’s

fields. Among the seven released films, Walker has

Taiwan in 1977 and studied at the Chinese Culture

been selected as the closing film of Cannes

University, from where he received a diploma in

was shining at Discovering the Other, the

Theatrical Arts in 1981. While studying, he began

International Film Installation at the National

to write and direct plays, which tackled issues of

Asian-Pacific Film Festival, and the Jury’s Prize at

the Golden Horse Film Festival. In 2008, the short film, Madame Butterfly was made

In 2013, TSAI returned to his hometown Kuching,

years, he was engaged in television production and

In 2002 the Minister of Culture and CNAP in

for the Lucca Film Festival, Italy, in memory of the

where he then finished his fifth film of “The Walker

script writing, and then he returned to theater and

150th anniversary of the death of the famous

of Taipei from his unique aesthetic perspective.

film Stray Dogs won him a Silver Lion in Venice and

lifestyles with a humorous slant. For the next 10

a Best Director title at Golden Horse Awards. His

The short film The Skywalk is Gone memorialized During the shooting of The Kid in 1991, he

the missing crossovers in Taipei.

discovered LEE Kang-sheng by chance in a

sixth film of “The Walker Project” series Journey to

the first dramatization of the Louvre Museum’s

the West, which was shot in Marseille, France, has

In 2003, the film Goodbye Dragon Inn won the

also been selected for the Panorama section at

favorite actor, though he had never taken any

Fipresci Prize at the Venice Film Festival, the Best

entitled Face, was completed. It has since become

Director at the Nantes Film Festival, the Gold

the benchmark for films venturing into the world

Rebels of the Neon God, based on the story of

Award at Chicago Film Festival, and the Jury’s

“Xiaokang”, as he became known from then on,

Prize at the Asia-Pacific Film Festival, the Hawaii

and turned him into the main character in his

Throughout 2010, TSAI kept on creating as an

artist. The installation piece It’s a Dream was

it one of the 10 best films of the year.

reserved by the Taipei Fine Arts Museum as a

permanent exhibit, and was invited to the

In 1993, Rebels of the Neon God was awarded the

In 2014, TSAI co-produced a theatre piece The Monk From Tang Dynasty with 4 prominent

Bronze Sakura Prize at the Tokyo Festival and the

Shanghai Biennial. Other pieces, such as Moonlight

together with TSAI’s retrospective were held in

on the River, were invited to exhibit at the Xue Xue

each city to critical acclaim. That same year, Tsai

des Arts et des Lettres”. In the same year he made

made history when his film Stray Dogs at the

In 1994, Vive L’Amour was awarded the Golden Lion

The Wayward Cloud, which was crowned three

Space 2 were invited to be displayed at the

Museum was screened in the Museum of National

Prize at the Venice Film Festival, the Fipresci Prize

times at the Berlin Film Festival: the Silver Bear

from the International Federation of Film Critics,

for its exceptional artistic contribution, the Alfred

and the Best Director at the Golden Horse Film

Bauer prize and the Fipresci prize. Away from film,

he also applied himself to Fine Art at this time. He

In 2011, TSAI cooperated with Johan KU, a famous

recognized by the Taishin Arts Awards and

exhibited at MoNTUE. Stray Dogs at the Museum

The River won the Silver Bear Prize at the Berlin

installation and performance art at “BMoCA:

2011, and stepped into the fashion world. The

was exhibited in Guangzhou's Times Museum,

Film Festival, the Silver Hugo Prize at the Chicago

installation piece The Theater in the Boiler Room

which marked a further extension of Tsai’s films

Film Festival, and the Jury’s Prize at both the São

organized and curated by the Chinese artist CAI

was displayed in the boiler room at the Songshan

into the artistic realms of art museums. His film

Paulo International Film Festival and the

Cultural and Creative Park. In the same year, the

Afternoon was selected to be screened out of

competition at the Venice Film Festival; while No

No Sleep, his seventh work in the Walker series,

In 1998 The Hole won TSAI the Fipresci Prize at the

of Mozart’s birthday, the Mozarteum Foundation in

You, in which TSAI Ming-liang returned to theater

won him the Best Director prize in Taipei Film

Cannes Film Festival, as well as the Silver Hugo,

Vienna sponsored Tsai to make the film I Don’t

performance after 27 years of absence.

the Best Director Prize and Best Asian Film at the

Want to Sleep Alone to present the creative

concepts and a discussion of Mozart from the

"No No Sleep at MoNTUE －Tsai Ming-Liang Solo

Starting with No Form, the project introduced short

films that feature LEE in different cities and were

Singapore International Film Festival, all in 1997.

What Time is it Over There? was “In Competition” in 2001, and awarded Best Soundtrack (TU Du-Chih) 8

In 2009, after 3 years in development and filming,

It’s a Dream was a video installation in old movie

produced in cooperation with different artistic 9

After it screened at the Hong Kong International Film Festival, it was put on Youku video sharing platform, and criticisms from netizens in China exploded. I was not surprised by this, and simply brushed them away without any comments. Well, I did mutter a little in my head: a slow walking Xiaokang isn't hurting anyone. Who knew that over the next two years, Xiaokang would become a Walker strolling down the streets in all corners of the world in six films. They were warmly applauded and invitations poured in. 2015 Hong Kong International Film Festival invited me shoot another one, and I didn't think twice and went for it. Much like going out for a sketch session, I drew a picture of Xiaokang's night stroll in Tokyo. Winter night, freezing, public bathhouse, Ando Masanobu's baby-smooth body. Sleepless night, sauna,

Xiaokang's sweat streaking down his cheeks. In the water, in the mist, a transient encounter.

Nogami Teruyo has seen all my films, as has her best friend Jiro. They often take Xiaokang and I to Nogami's favorite gastropub. We would wine and dine, and have a blast. We give each other big hugs before we say goodbyes. Every time we come to Japan, it's the same. Twenty years, it has been.

Her hair is now all grey. Her back is more humped. But her head is clear as can be. "I dislike Abe," she would say. "Allowing eighteen-year-old to vote? These children, all they know is play video games, shopping, watch football. Is there still hope for the future?" One day, on the spur of the moment, I said I want to film her. She said to me, squinting, "Then you'd better hurry, time is running out." And then when I actually approached her on filming, she would use Oosaka as a shield to tell me not to come. "I have a lot on my plate now." "Why do you want to film an old wrinkly lady?" "Please don't come to my house." "Don't film me. There's really nothing to film." When I was attending the Fukuoka International Film Festival, I asked my interpreter Yoshiko to call Nogami.

"You are still on it?" "I've never had someone film me." "Nogami, I'm not someone.” "I am your lover." “OK, OK, OK, Tsai-san is my last boyfriend.” Giggles came from the other side of the phone. An autumn afternoon, we were at Toho Studios. The sun was playing hide and seek that day. I filmed her and Xiaokang. I wanted to preserve her portrait, as a gift to Japan and children of the future.

The Walker series is a special heaven-sent in my film-making career. In 2011, I was mesmerized by Xiaokang's slow walking performance on stage. It was transcending, and I vowed then to make it into a film. I let Xiaokang do his signature slow walk around the world, as a reflection of the long-lost preaching spirit, an homage to the monk-traveler Xuanzang in the Tang

Journey To The West

Dynasty, who embarked on a ten-thousand-mile overland pilgrimage to India. Director of FIDMarseille, Jean-Pierre Rehm saw No Form in my Walker series, and extended assistance to make Xiaokang's Marseille trip possible. The film concept was finally realized thanks to the support from the Festival Les Instants VidĂŠo and Arte Television. Journey to the West is the sixth installment in the Walker series. It's Xiaokang first time setting foot in the West as a monk donning red robes. There's a mountain resembling the looks of a monkey, conveniently called the Monkey Mountain. It reminded me of the classic Chinese novel Journey to the West, and conjured up images of French actor Denis Lavant. A wrinkled face carved by the knife of age. His face drew me in like the rocky texture of Monkey Mountain. I began to brainstormâ&#x20AC;&#x201D;I want Xiaokang to walk on his face. Roaming this ancient sun-dappled port city in the late summer, kicking up dust

all over the place. I also thought of the Diamond Sutra: All things contrived are like Dream, illusion, bubble, shadow, And as dewdrop or lightning, They should be regarded as such.

No No Sleep at MoNTUE －Tsai Ming-Liang Solo Exhibition