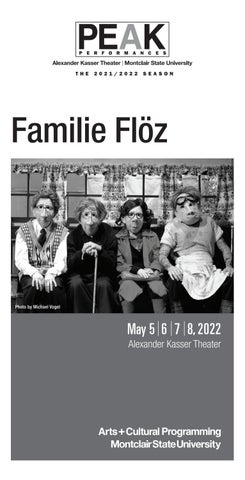 This season is made possible, in part, with funds from: The Alexander Kasser Theater Endowment Fund, PEAK Performances Patrons, The New Jersey State Council on the Arts

Program Notes The road to heaven leads through hell. Strange things happen at Hotel Paradiso, a time-honored mountain resort kept alive with some difficulty by an old lady and her family. While a mineral spring promises relief from physical and mental pain and the hotel proudly boasts four stars, dark clouds are nevertheless gathering in the bright sky. The son dreams of his great love while fighting his sister in his effort to gain control of the hotel. Meanwhile, the maid is in the habit of stealing the hotel guests’ valuables, and the cook chops up much more than just pork.... A first corpse turns up, causing all the hotel’s staff and guests to get mixed up in a turmoil of fatal events. Dark abysses open up between the dizzy heights, threatening to devour all of the protagonists. The hotel’s decline seems to be inevitable, since corpses are always bad for business.... This is a dramatic nightmare steeped in black humor with a hint of melancholy, the most vicious and mysterious play hitherto staged by Familie Flöz.

About the Company Familie Flöz is a German-based theater company that uses humor, masks, improvisation, mime, and physical comedy to create family-friendly shows. The company was begun in 1994 by Hajo Schüler and Markus Michalkowski, acting and mime students at the Folkwang University of the Arts in Essen in the Ruhr area of Germany, and fellow Michael Vogel joined soon thereafter. Their first production, a comic piece on life on a construction site, premiered at the university in 1994. Beginning with its second production, Ristorante Immortale, in 1998, the Familie Flöz gave up using language in its works, instead relying on visuals and music. Familie Flöz productions were hits at both the Edinburgh Festival in 2001, 2004, 2015, and 2016 and at the London International Mime Festival. The company first selected the name Flöz Production at the Edinburgh Festival, which later became Familie Flöz. The name Flöz is from their first play about undergrounders springing out of a hole in the earth, where mines have veins (floz) of gold. Familie Flöz makes theater with material that exists, before the need for speech. Every conflict initially manifests itself in the body. Physical conflict is the birth of every dramatic situation. Every production is made in a creative, collective process in which all performers also engage as the authors of their characters and situations. In countless improvisations the group works around its self-chosen theme and collects dramatic material before the speechless masks come into play. Similar to working with text, the mask brings with it not only a form, but also content. From the development of a mask, into the playful probing, and through to the symbiosis of player and mask, the process significantly shapes the result. The fundamental paradox of the mask—one covers the living face with a rigid form in order to create a living character—is at once compelling and challenging for the actor. But not only for the actor. The mask comes to life initially in the imagination of the spectator, who in this instant also becomes creator. Sensitive to the spectators’ responses, and with a critical eye on our own work, all Flöz productions continue to develop and change as they are played and consequently inherit their density and intensity. Familie Flöz has been based in Berlin since 2001. They have performed in 42 countries. All productions are produced in creative collaboration among the troupe’s members.

CHOREOGRAPHY BY BILL WITH JANET WONG

Arts + Cultural Programming (ACP) produces and presents dance, music, theater, opera, and circus performances in the Alexander Kasser Theater, on the campus of Montclair State University, for MSU students and the general public. Through its internationally acclaimed live performing arts series PEAK Performances, ACP defies convention by supporting new performance ideas without compromise. ACP believes that for the performing arts to be sustainable, audiences must evolve and that the way to achieve this goal is to empower the best artists of our time to achieve new heights of imagination. With its newly launched PEAK Plus video-capture program, ACP makes live performances accessible worldwide, drastically expanding audiences for new work. Through its Creative Thinking course, ACP engages artists to participate in a groundbreaking research laboratory, illustrating for students of all fields of study that art and science are symbiotic. Diversity, equity, and inclusion are core values manifested in ACP’s long-standing embrace of work by artists not yet supported by other major institutions in the region. Because ACP provides the highest-quality production values, audiences have an opportunity to engage with creative viewpoints that are bold and insightful and fully realized. PEAK Performances is credited with 57 world premieres, 54 US premieres, and 66 commissions. ACP Executive Director Jedediah Wheeler has been awarded the William Dawson Award for Programmatic Excellence and sustained Achievement in Programming from the national organization Association of Performing Arts Professionals. For five successive years The New Jersey Council on the Arts awarded ACP a Citation of Excellence in performance programming. ACP gratefully acknowledges our student staff and volunteers. @peakperfs 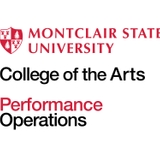