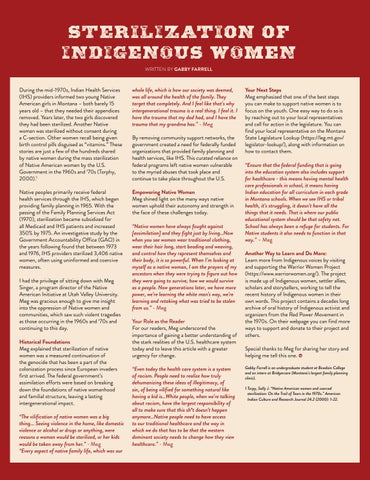 During the mid-1970s, Indian Health Services (IHS) providers informed two young Native American girls in Montana – both barely 15 years old – that they needed their appendices removed. Years later, the two girls discovered they had been sterilized. Another Native woman was sterilized without consent during a C-section. Other women recall being given birth control pills disguised as “vitamins.” These stories are just a few of the hundreds shared by native women during the mass sterilization of Native American women by the U.S. Government in the 1960s and ‘70s (Torphy, 2000).1

Native peoples primarily receive federal health services through the IHS, which began providing family planning in 1965. With the passing of the Family Planning Services Act (1970), sterilization became subsidized for all Medicaid and IHS patients and increased 350% by 1975. An investigative study by the Government Accountability Office (GAO) in the years following found that between 1973 and 1976, IHS providers sterilized 3,406 native women, often using uninformed and coercive measures.

Empowering Native Women Meg shined light on the many ways native women uphold their autonomy and strength in the face of these challenges today.

I had the privilege of sitting down with Meg Singer, a program director of the Native American Initiative at Utah Valley University. Meg was gracious enough to give me insight into the oppression of Native women and communities, which saw such violent tragedies as those occurring in the 1960s and ‘70s and continuing to this day. Historical Foundations Meg explained that sterilization of native women was a measured continuation of the genocide that has been a part of the colonization process since European invaders first arrived. The federal government’s assimilation efforts were based on breaking down the foundations of native womanhood and familial structure, leaving a lasting intergenerational impact. “The vilification of native women was a big thing... Seeing violence in the home, like domestic violence or alcohol or drugs or anything, were reasons a woman would be sterilized, or her kids would be taken away from her.” - Meg “Every aspect of native family life, which was our 52

By removing community support networks, the government created a need for federally funded organizations that provided family planning and health services, like IHS. This curated reliance on federal programs left native women vulnerable to the myriad abuses that took place and continue to take place throughout the U.S.

“Native women have always fought against [assimilation] and they fight just by living…Now when you see women wear traditional clothing, wear their hair long, start beading and weaving, and control how they represent themselves and their body, it is so powerful. When I’m looking at myself as a native woman, I am the prayers of my ancestors when they were trying to figure out how they were going to survive, how we would survive as a people. Now generations later, we have more power, we’re learning the white man’s way, we’re learning and retaking what was tried to be stolen from us.” - Meg Your Role as the Reader For our readers, Meg underscored the importance of gaining a better understanding of the stark realities of the U.S. healthcare system today and to leave this article with a greater urgency for change. “Even today the health care system is a system of racism. People need to realize how truly dehumanizing these ideas of illegitimacy, of sin, of being vilified for something natural like having a kid is…White people, when we’re talking about racism, have the largest responsibility of all to make sure that this sh*t doesn’t happen anymore…Native people need to have access to our traditional healthcare and the way in which we do that has to be that the western dominant society needs to change how they view healthcare.” - Meg

Your Next Steps Meg emphasized that one of the best steps you can make to support native women is to focus on the youth. One easy way to do so is by reaching out to your local representatives and call for action in the legislature. You can find your local representative on the Montana State Legislature Lookup (https://leg.mt.gov/ legislator-lookup/), along with information on how to contact them. “Ensure that the federal funding that is going into the education system also includes support for healthcare - this means having mental health care professionals in school, it means having Indian education for all curriculum in each grade in Montana schools. When we see IHS or tribal health, it’s struggling, it doesn’t have all the things that it needs. That is where our public educational system should be that safety net. School has always been a refuge for students. For Native students it also needs to function in that way.” – Meg Another Way to Learn and Do More: Learn more from Indigenous voices by visiting and supporting the Warrior Women Project (https://www.warriorwomen.org/). The project is made up of Indigenous women, settler allies, scholars and storytellers, working to tell the recent history of Indigenous women in their own words. This project contains a decades long archive of oral history of Indigenous activist and organizers from the Red Power Movement in the 1970s. On their webpage you can find more ways to support and donate to their project and others. Special thanks to Meg for sharing her story and helping me tell this one. Gabby Farrell is an undergraduate student at Bowdoin College and an intern at Bridgercare (Montana’s largest family planning clinic). 1Torpy, Sally J. “Native American women and coerced sterilization: On the Trail of Tears in the 1970s.” American Indian Culture and Research Journal 24.2 (2000): 1-22. 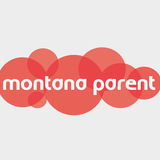