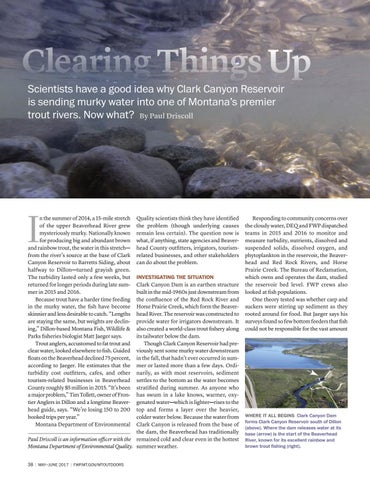 Scientists have a good idea why Clark Canyon Reservoir is sending murky water into one of Montana’s premier trout rivers. Now what?

n the summer of 2014, a 15-mile stretch of the upper Beaverhead River grew mysteriously murky. Nationally known for producing big and abundant brown and rainbow trout, the water in this stretch— from the river’s source at the base of Clark Canyon Reservoir to Barretts Siding, about halfway to Dillon—turned grayish green. The turbidity lasted only a few weeks, but returned for longer periods during late summer in 2015 and 2016. Because trout have a harder time feeding in the murky water, the ﬁsh have become skinnier and less desirable to catch. “Lengths are staying the same, but weights are declining,” Dillon-based Montana Fish, Wildlife &amp; Parks ﬁsheries biologist Matt Jaeger says. Trout anglers, accustomed to fat trout and clear water, looked elsewhere to ﬁsh. Guided ﬂoats on the Beaverhead declined 75 percent, according to Jaeger. He estimates that the turbidity cost outﬁtters, cafes, and other tourism-related businesses in Beaverhead County roughly $5 million in 2015. “It’s been a major problem,” Tim Tollett, owner of Frontier Anglers in Dillon and a longtime Beaverhead guide, says. “We’re losing 150 to 200 booked trips per year.” Montana Department of Environmental

Quality scientists think they have identiﬁed the problem (though underlying causes remain less certain). The question now is what, if anything, state agencies and Beaverhead County outﬁtters, irrigators, tourismrelated businesses, and other stakeholders can do about the problem.

INVESTIGATING THE SITUATION Clark Canyon Dam is an earthen structure built in the mid-1960s just downstream from the conﬂuence of the Red Rock River and Horse Prairie Creek, which form the Beaverhead River. The reservoir was constructed to provide water for irrigators downstream. It also created a world-class trout ﬁshery along its tailwater below the dam. Though Clark Canyon Reservoir had previously sent some murky water downstream in the fall, that hadn’t ever occurred in summer or lasted more than a few days. Ordinarily, as with most reservoirs, sediment settles to the bottom as the water becomes stratiﬁed during summer. As anyone who has swum in a lake knows, warmer, oxygenated water—which is lighter—rises to the top and forms a layer over the heavier, colder water below. Because the water from Clark Canyon is released from the base of the dam, the Beaverhead has traditionally Paul Driscoll is an information oﬃcer with the remained cold and clear even in the hottest Montana Department of Environmental Quality. summer weather.

Responding to community concerns over the cloudy water, DEQ and FWP dispatched teams in 2015 and 2016 to monitor and measure turbidity, nutrients, dissolved and suspended solids, dissolved oxygen, and phytoplankton in the reservoir, the Beaverhead and Red Rock Rivers, and Horse Prairie Creek. The Bureau of Reclamation, which owns and operates the dam, studied the reservoir bed level. FWP crews also looked at ﬁsh populations. One theory tested was whether carp and suckers were stirring up sediment as they rooted around for food. But Jaeger says his surveys found so few bottom feeders that ﬁsh could not be responsible for the vast amount

€ WHERE IT ALL BEGINS Clark Canyon Dam forms Clark Canyon Reservoir south of Dillon (above). Where the dam releases water at its base (arrow) is the start of the Beaverhead River, known for its excellent rainbow and brown trout fishing (right).

of sediment mixing. Others theorized that alterations in land use in the surrounding watershed may be sending excess nutrients or pollutants into the reservoir. According to Eric Urban, chief of the DEQ Water Quality Planning Bureau, monitoring and data analysis shows that the total amount of nutrients has remained unchanged. The Bureau of Reclamation reports that the reservoir’s sediment depth, dam operations, and water releases also have not changed in recent years.

Where Sacajawea found her brother

WATER LAYERS ARE MIXING Urban says DEQ scientists have determined could stay closer to historical levels. That that the reservoir is “de-stratifying.” In other could decrease chances of destratiﬁcation. words, the two ordinarily stable water layers In March, the Beaverhead Watershed are mixing and somehow stirring up sedi- Committee formed a team of irrigators, outment that ordinarily stays on the reservoir ﬁtters, and other tourism-related business bottom. On some days last summer, scien- owners to ﬁgure out the best course of tists found a 10- to 20-foot layer of turbid action. “I think DEQ has done a great job water at the bottom of the reservoir. “The of diagnosing the problem,” Jaeger says. ﬁne sediment delivered to or produced in “The challenge now is for agencies and the Clark Canyon Reservoir since its formation people most aﬀected by this situation to is being re-suspended,” Urban says. decide what they want to do about it.” Fortunately, the degraded water quality Among options being discussed are seems not to have harmed aquatic life. keeping the reservoir at a higher water level Jaeger says trout numbers in the Beaverhead (a lower pool leads to conditions that favor remain strong, and DEQ surveys found that destratiﬁcation), and releasing water from the size of aquatic insect communities higher in the Clark Canyon Reservoir water remains comparable to what surveys found column. Even if an engineering solution before 2014. such as changing the water outlet were feaSouthwestern Montana snowpack was sible, says Jaeger, it would be expensive. “If higher than average in late winter of 2017. If people can identify and agree upon a viable that remains the case into late spring and solution, the ﬁnal challenge to restoring early summer, water levels on Clark Canyon clear water to the Beaverhead will be ﬁnding could increase and water temperatures a way to fund it.”

ﬔe site of Clark Canyon Reservoir has historical signiﬁcance dating back more than two centuries. In August 1805, the men of the Corps of Discovery who accompanied Captain William Clark lugged heavily laden canoes upstream on what we know today as the Beaverhead River above Barretts Siding. expedition member Patrick Gass noted the Beaverhead’s twisty, alder-laden route, still a feature today: “...the river meanders… through the bushes and is not more than 20 yards wide, and about a foot and a half deep. ﬔe water is very cold, and severe and disagreeable to the men, who are frequently obliged to wade and drag the canoes.” Sergeant John Ordway wrote more cheerily of the river’s excellent ﬁshery (composed of westslope cutthroat trout and Arctic grayling): “...the River crooked Shallow and rapid. Some deep holes where we caught a number of Trout.” Traveling several days ahead, Captain Meriwether Lewis followed Horse Prairie Creek to the conﬂuence of the Beaverhead. It was near this juncture that he ﬁrst encountered a Shoshone Indian tribe, the chief of which turned out to be Sacajawea’s brother, Cameahwait. ﬔe Indian leader assisted the expedition by providing guides and horses. Clark cached his big-river canoes for the return journey in a place that today is inundated by Clark Canyon Reservoir. Because of the fortuitous meeting with Cameahwait, Lewis named the spot Camp Fortunate.

Scientists have a good idea why Clark Canyon Reservoir is sending murky water into one of Montana’s premier trout rivers. Now what? By Paul J. Driscoll. This article appears in Montana Outdoors magazine May-June 2017 issue. 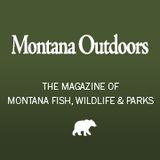