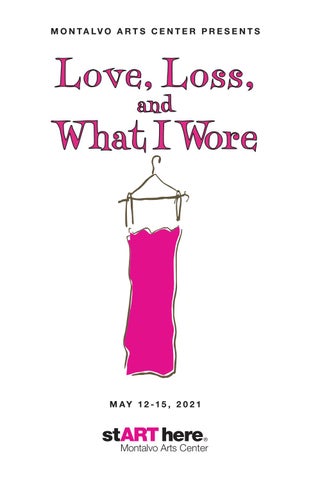 What I Wore by

Nora Ephron and Delia Ephron based on the book by

Love, Loss and What I Wore is presented by special arrangement with Dramatists Play Service, Inc., New York.

to the inaugural show in our brand new series, Play on the Grounds. Growing up in New York, it was a tradition for my family and I to attend the theatre often. And so it is a personal thrill for me to support live theater at Montalvo. I cannot begin to express my excitement and gratitude in being able to welcome you back to Montalvo for our first in-person performance since March 2020. After a year of watching art and culture on a screen, I look forward to all the events, new and returning, that we get to share with you as we re-open. Thanks for joining us tonight.

A Note from Director Lee Ann Payne: Love, Loss & What I Wore is a wonderful, soulful theater piece that seems to touch everyone. We all have that outfit, that “look” that we were wearing that defined a particular moment in our lives—it might be a vivid moment, or just an average moment that somehow reflected something deeper about ourselves. These six talented women are here to share all of those with you and if you’re anything like me, you’ll find a piece of your life in at least one of them. And as important, if you’re anything like me, you have missed being in an audience in front of live performers. A reminder: there’s no fast forward, no rewind, no recording it for later. It’s happening here. Now. At this time. For you. Enjoy the show! ABOUT THE DIRECTOR:

Lee Ann is excited to helm this production with these six talented women. She has worked as a Director and Choreographer in theaters throughout the Bay Area from San Francisco to Santa Cruz. A performer in her own right, Lee Ann is a member of the Actors’ Equity Association. She’s particularly excited to work close to home as she is also Montalvo’s Director of Finance!

MASKING Masks are encouraged. We ask that all attendees adhere to state, county, and CDC guidelines as it pertains to masks and other COVID-19 protocols.

About the Cast Linda Piccone is excited to be back in a live stage setting again. Her last performance in The Mystery of Edwin Drood was closed down mid run by the Covid emergency. She has performed throughout the Bay Area as well as directed for Los Altos Stage Company, Palo Alto Players, Hillbarn, Jewel, and California Conservatory Theatre.

Kelly Hudson is thrilled to be part of the Play on the Grounds program! Locally she has acted at Palo Alto Players, Hillbarn Theatre, Foothill College and Los Altos Stage, among others. New York stage credits include work with Primary Stages, Ensemble Studio Theatre, and Riverside Shakespeare. Kelly studied at The Neighborhood Playhouse in New York City with Sanford Meisner. When not on stage, Kelly is the Managing Director at Montalvo Arts Center in Saratoga. A huge thank you to all of her colleagues at Montalvo for all of their support!

Melissa Jones (she/her) is thrilled to perform with Montalvo Arts Center! Previous credits include T he White Snake (White Snake), Hamlet (Gertrude), and The Comedy of Errors (Dromio of Syracuse, Theatre Bay Area Awards Finalist) at Silicon Valley Shakespeare; The Curious Incident of the Dog in the Night-Time (Judy) and Sojourn (Marta) at The Pear; The Revolutionists (Charlotte Corday) at Dragon Productions; Tigers Be Still (Sherry) at City Lights; and How to Succeed in Business Without Really Trying (Miss Jones) and Flower Drum Song (Helen Chao) at WVLO. During the day, she works as SVS’ Development and Education Director, while at night, she moonlights as a hair/makeup designer (Pixar, Disney Channel UK, Opera San Jose, West Bay Opera, and others). In June, she can be seen as Abby in The Mercy Seat, performing live at Los Altos Stage Company.

Nicole Odell is an actor, writer, improvisor, and instructor of all of the above. She earned her B.A. in Drama from San Francisco State in 2010, and trained in the Conservatory at Second City in Hollywood. In 2014, she returned to the Bay. She is an instructor at Leela Improv Training Center and a writer, performer, and teacher at the sketch comedy company Killing My Lobster. Nicole has participated in comedy festivals like SF Sketchfest, the  Downtown Las Vegas Improv Festival, the Denver Improv Festival, SFIF, San Jose Improv Festival, and Femprovisor Fest. She has appeared on stages around the Bay Area, including with Faultline Theatre Co, PianoFight, Pacifica Spindrift Players, the Olympians Festival, EXIT Theatre, and Livermore Shakespeare Festival.

Doll Piccotto is thrilled to be a part of this relevant, strangely familiar piece and to be a part of such a fantastic cast of powerhouse human beings. Thank you so much to Lee Ann, everyone involved and to Montalvo for making a piece like this possible and for starting to safely bring some theatre back to the Bay Area. Doll has been doing theatre in the Bay Area for longer than she’d probably like to admit, but has loved every minute of it. Before the pandemic, she would have last been seen in The Curious Incident of the Dog in the Night-Time at the Pear Theatre. A self-described Shakespeare nerd, Doll is the resident Dramaturg for Silicon Valley Shakespeare and has been seen in numerous productions throughout the Bay Area, including Caliban in the Tempest at the Pear Theatre, Claudius in Hamlet, Beatrice in Much Ado About Nothing and Queen Elizabeth in both Beard of Avon at the Pear and Shakespeare in Love at Palo Alto Players. She is looking forward to the safe return of theatre and is so happy to be a part of this step in bringing it back with fun, safely and so, so much heart.

Eiko Yamamoto is excited to debut at Play on the Grounds at the Montalvo Arts Center with Love, Loss and What I Wore. Eiko’s recent credit: Sarom in the world premiere of Downtown Crossing at Company One, Sugar (understudy) and Letter Writer #2 (understudy) in Tiny Beautiful Things at San Francisco Playhouse, Meiko in Eureka Day at Spreckels Theatre Company, and Regina Fresno in FantasticLand at Town Hall Theatre. Other select credits include Flower Drum Song, The Phantom of the Opera, and Richard III. The Ground Floor at Berkeley Rep (YWoCC), The Dragon, Palo Alto Players, Pear Theatre, Fuse Theatre, Alter Theater are some of the companies where she’s worked. Upcoming: Twelfth Night with African American Shakespeare Company. She is an alumna of University of California Los Angeles and the California College of the Arts, San Francisco. Learn more about Eika at eikoyamamoto.com and follow @eikoyh.

JOIN US FOR MORE

Fiction by Steven Dietz ​J une 23–25 • 6-7:30pm • Tickets $25 Linda & Michael Waterman are successful fiction writers, happily married to one another. When Linda is diagnosed with a tumor, she asks her husband to share his diaries with her. The boundaries between past and present, fact and fiction, trust and betrayal begin to break down. No life, as it turns out, is an open book. Caught by Christopher Chen ​J uly 21–23 • 6-7:30pm • Tickets $25 An art gallery hosts a retrospective of the work of a Chinese dissident artist who was imprisoned his art. The artist himself is present, and shares details of an ordeal that defies belief. What follows is a labyrinthine exploration of truth, art, social justice and cultural appropriation, where nothing is as it first appears. tickets available at

montalvoarts.org/play Play on the Grounds is made possible through the generous support provided by

UPCOMING EVENTS S C R AT C H S PA C E In these virtual conversations, we bring together artists, composers, writers, scholars, activists, and others to explore what kinds of radical imaginaries can unfold in this moment of racial reckoning, economic uncertainty, civil unrest, environmental crisis, and a global pandemic. How can we use our imaginations to build a better present/future? Foraging for a Future ​M ay 20 • 12pm • Virtual Event How do we reclaim our natural place in the world? Join chef and journalist Andrea Blum and artist Kija Lucas for a conversation about their new cookbook on foraging and sustainable food practices and how they can help us cultivate a more intimate relationship with our environment and other living things. Captioning available for this event. SUNSET CINEMA Nothing says summer more than being outside under the stars watching a great movie. Join us this year on our Great Lawn as we host Sunset Cinema, and enjoy a great film on the big screen in the beautiful environment of Montalvo. Black Panther June 13 • 9pm • Tickets $13-18 • Rated PG-13 T’Challa, heir to the hidden but advanced kingdom of Wakanda, must step forward to lead his people into a new future and confront a challenger from his country’s past. This thrilling adventure from the Marvel Cinematic Universe stars Chadwick Boseman, Michael B. Jordan, and Lupita Nyong’o. Ghostbusters (1984) July 25 • 8:30pm • Tickets $13-18 • Rated PG Three former parapsychology professors set up shop as a ghost removal service called the Ghostbusters. Together, they uncover an ever-growing population of specters in Manhattan, culminating in an epic showdown with a giant marshmallow man as the fate of New York City hangs in the balance.

if you enjoyed tonight’s performance... Consider becoming a Montalvo donor! We are a nonprofit organization whose mission is to engage the public in the creative process. As a vibrant multidisciplinary arts center, we are a catalyst for exploring the arts, unleashing creativity, and advancing different cultural perspectives. Being a nonprofit means we rely on donations from generous patrons like you to provide Silicon Valley with programs like Play on the Grounds. Your support will go a long way towards helping sustain Montalvo’s vital place in this community and allowing us to continue serving cutting-edge arts education programs. To learn more about how your donation can impact Montalvo, visit montalvoarts.org/support. 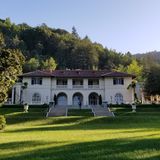 Program: Love, Loss, and What I Wore

Program: Love, Loss, and What I Wore