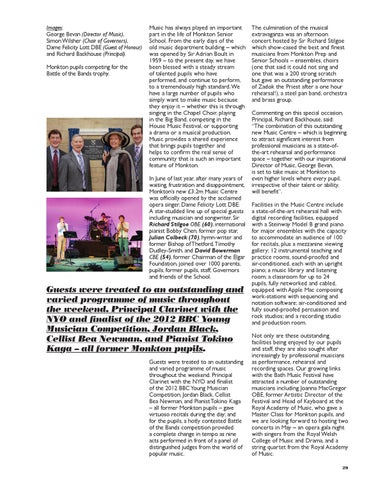 Music has always played an important part in the life of Monkton Senior School. From the early days of the old music department building – which was opened by Sir Adrian Boult in 1959 – to the present day, we have been blessed with a steady stream of talented pupils who have performed, and continue to perform, to a tremendously high standard. We have a large number of pupils who simply want to make music because they enjoy it – whether this is through singing in the Chapel Choir, playing in the Big Band, competing in the House Music Festival, or supporting a drama or a musical production. Music provides a shared experience that brings pupils together and KHOSV WR FRQÀUP WKH UHDO VHQVH RI community that is such an important feature of Monkton. In June of last year, after many years of waiting, frustration and disappointment, Monkton’s new £3.2m Music Centre ZDV RIÀFLDOO\ RSHQHG E\ WKH DFFODLPHG opera singer, Dame Felicity Lott DBE. A star-studded line up of special guests including musician and songwriter, Sir Richard Stilgoe OBE (60), international pianist Bobby Chen, former pop star, Julian Colbeck (70), hymn-writer and former Bishop of Thetford, Timothy Dudley-Smith, and David Bowerman CBE (54), former Chairman of the Elgar Foundation, joined over 1000 parents, pupils, former pupils, staff, Governors and friends of the School.

The culmination of the musical extravaganza was an afternoon concert hosted by Sir Richard Stilgoe ZKLFK VKRZ FDVHG WKH EHVW DQG ÀQHVW musicians from Monkton Prep and Senior Schools – ensembles, choirs (one that said it could not sing and one that was a 200 strong scratch but gave an outstanding performance of Zadok the Priest after a one hour rehearsal!), a steel pan band, orchestra and brass group. Commenting on this special occasion, Principal, Richard Backhouse, said: “The combination of this outstanding new Music Centre – which is beginning WR DWWUDFW VLJQLÀFDQW LQWHUHVW IURP professional musicians as a state-ofthe-art rehearsal and performance space – together with our inspirational Director of Music, George Bevan, is set to take music at Monkton to even higher levels where every pupil, irrespective of their talent or ability, ZLOO EHQHÀWµ Facilities in the Music Centre include a state-of-the-art rehearsal hall with digital recording facilities, equipped with a Steinway Model B grand piano for major ensembles with the capacity to accommodate an audience of 100 for recitals, plus a mezzanine viewing gallery; 12 instrumental teaching and practice rooms, sound-proofed and air-conditioned, each with an upright piano; a music library and listening room; a classroom for up to 24 pupils, fully networked and cabled, equipped with Apple Mac composing work-stations with sequencing and notation software; air-conditioned and fully sound-proofed percussion and rock studios; and a recording studio and production room. Not only are these outstanding facilities being enjoyed by our pupils and staff, they are also sought after increasingly by professional musicians as performance, rehearsal and recording spaces. Our growing links with the Bath Music Festival have attracted a number of outstanding musicians including Joanna MacGregor OBE, former Artistic Director of the Festival and Head of Keyboard at the Royal Academy of Music, who gave a Master Class for Monkton pupils, and we are looking forward to hosting two concerts in May – an opera gala night with singers from the Royal Welsh College of Music and Drama, and a string quartet from the Royal Academy of Music. 29

The Magazine for Monkton Combe School 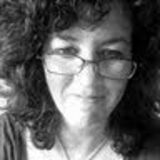