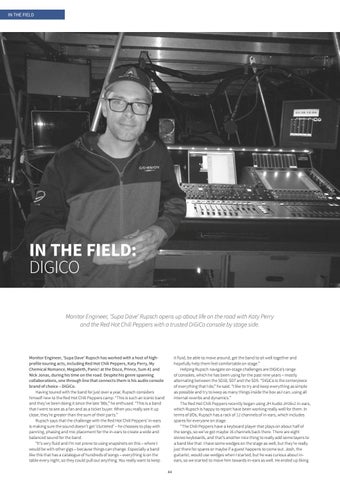 IN THE FIELD: DIGICO Monitor Engineer, ‘Supa Dave’ Rupsch opens up about life on the road with Katy Perry and the Red Hot Chili Peppers with a trusted DiGiCo console by stage side.

Monitor Engineer, ‘Supa Dave’ Rupsch has worked with a host of highprofile touring acts, including Red Hot Chili Peppers, Katy Perry, My Chemical Romance, Megadeth, Panic! at the Disco, Prince, Sum 41 and Nick Jonas, during his time on the road. Despite his genre spanning collaborations, one through line that connects them is his audio console brand of choice – DiGiCo. Having toured with the band for just over a year, Rupsch considers himself new to the Red Hot Chili Peppers camp. “This is such an iconic band and they’ve been doing it since the late ’80s,” he enthused. “This is a band that I went to see as a fan and as a ticket buyer. When you really see it up close, they’re greater than the sum of their parts.” Rupsch says that the challenge with the Red Hot Chili Peppers’ in-ears is making sure the sound doesn’t get ‘cluttered’ – he chooses to play with panning, phasing and mic placement for the in-ears to create a wide and balanced sound for the band. “It’s very fluid and I’m not prone to using snapshots on this – where I would be with other gigs – because things can change. Especially a band like this that has a catalogue of hundreds of songs – everything is on the table every night, so they could pull out anything. You really want to keep

it fluid, be able to move around, get the band to sit well together and hopefully help them feel comfortable on stage.” Helping Rupsch navigate on-stage challenges are DiGiCo’s range of consoles, which he has been using for the past nine years – mostly alternating between the SD10, SD7 and the SD5. “DiGiCo is the centerpiece of everything that I do,” he said. “I like to try and keep everything as simple as possible and try to keep as many things inside the box as I can, using all internal reverbs and dynamics.” The Red Hot Chili Peppers recently began using JH Audio JH16v2 in-ears, which Rupsch is happy to report have been working really well for them. In terms of I/Os, Rupsch has a rack of 12 channels of in-ears, which includes spares for everyone on stage. “The Chili Peppers have a keyboard player that plays on about half of the songs, so we’ve got maybe 16 channels back there. There are eight stereo keyboards, and that’s another nice thing to really add some layers to a band like that. I have some wedges on the stage as well, but they’re really just there for spares or maybe if a guest happens to come out. Josh, the guitarist, would use wedges when I started, but he was curious about inears, so we started to move him towards in-ears as well. He ended up liking 44