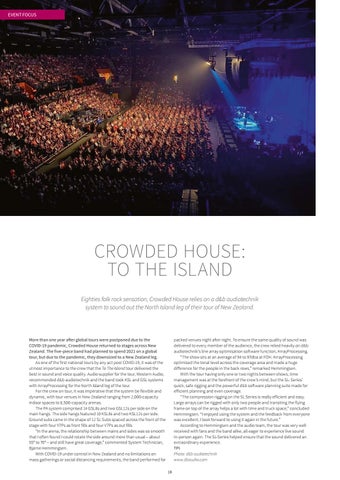 CROWDED HOUSE: TO THE ISLAND Eighties folk rock sensation, Crowded House relies on a d&b audiotechnik system to sound out the North Island leg of their tour of New Zealand.

More than one year after global tours were postponed due to the COVID-19 pandemic, Crowded House returned to stages across New Zealand. The five-piece band had planned to spend 2021 on a global tour, but due to the pandemic, they downsized to a New Zealand leg. As one of the first national tours by any act post COVID-19, it was of the utmost importance to the crew that the To The Island tour delivered the best in sound and voice quality. Audio supplier for the tour, Western Audio, recommended d&b audiotechnik and the band took KSL and GSL systems with ArrayProcessing for the North Island leg of the tour. For the crew on tour, it was imperative that the system be flexible and dynamic, with tour venues in New Zealand ranging from 2,000-capacity indoor spaces to 8,500-capacity arenas. The PA system comprised 14 GSL8s and two GSL12s per side on the main hangs. The side hangs featured 10 KSL8s and two KSL12s per side. Ground subs came in the shape of 12 SL Subs spaced across the front of the stage with four Y7Ps as front fills and four V7Ps as out fills. “In the arena, the relationship between mains and sides was so smooth that I often found I could rotate the side around more than usual – about 55° to 70° – and still have great coverage,” commented System Technician, Bjarne Hemmingsen. With COVID-19 under control in New Zealand and no limitations on mass gatherings or social distancing requirements, the band performed for

packed venues night after night. To ensure the same quality of sound was delivered to every member of the audience, the crew relied heavily on d&b audiotechnik’s line array optimisation software function, ArrayProcessing. “The show sits at an average of 94 to 97dba at FOH. ArrayProcessing optimised the tonal level across the coverage area and made a huge difference for the people in the back rows,” remarked Hemmingsen. With the tour having only one or two nights between shows, time management was at the forefront of the crew’s mind, but the SL- Series’ quick, safe rigging and the powerful d&b software planning suite made for efficient planning and even coverage. “The compression rigging on the SL Series is really efficient and easy. Large arrays can be rigged with only two people and transiting the flying frame on top of the array helps a lot with time and truck space,” concluded Hemmingsen. “I enjoyed using the system and the feedback from everyone was excellent, I look forward to using it again in the future.” According to Hemmingsen and the audio team, the tour was very well received with fans and the band alike, all eager to experience live sound in-person again. The SL-Series helped ensure that the sound delivered an extraordinary experience. TPi Photo: d&b audiotechnik www.dbaudio.com 18