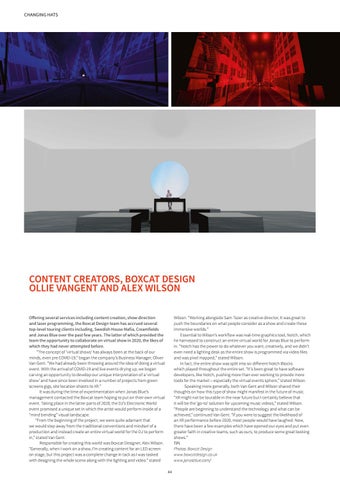 CONTENT CREATORS, BOXCAT DESIGN OLLIE VANGENT AND ALEX WILSON Offering several services including content creation, show direction and laser programming, the Boxcat Design team has accrued several top-level touring clients including, Swedish House Mafia, Creamfields and Jonas Blue over the past few years. The latter of which provided the team the opportunity to collaborate on virtual show in 2020, the likes of which they had never attempted before. “The concept of ‘virtual shows’ has always been at the back of our minds, even pre COVID-19,” began the company’s Business Manager, Oliver Van Gent. “We had already been throwing around the idea of doing a virtual event. With the arrival of COVID-19 and live events drying up, we began carving an opportunity to develop our unique interpretation of a ‘virtual show’ and have since been involved in a number of projects from green screens gigs, site location shoots to XR.” It was during the time of experimentation when Jonas Blue’s management contacted the Boxcat team hoping to put on their own virtual event. Taking place in the latter parts of 2020, the DJ’s Electronic World event promised a unique set in which the artist would perform inside of a “mind bending” visual landscape. “From the beginning of the project, we were quite adamant that we would step away from the traditional conventions and mindset of a production and instead create an entire virtual world for the DJ to perform in,” stated Van Gent. Responsible for creating this world was Boxcat Designer, Alex Wilson. “Generally, when I work on a show, I’m creating content for an LED screen on stage, but this project was a complete change in tack as I was tasked with designing the whole scene along with the lighting and video.” stated

Wilson. “Working alongside Sam Tozer as creative director, It was great to push the boundaries on what people consider as a show and create these immersive worlds.” Essential to Wilson’s workflow was real-time graphics tool, Notch, which he harnessed to construct an entire virtual world for Jonas Blue to perform in. “Notch has the power to do whatever you want, creatively, and we didn’t even need a lighting desk as the entire show is programmed via video files and was pixel mapped,” stated Wilson. In fact, the entire show was split into six different Notch Blocks which played throughout the entire set. “It’s been great to have software developers, like Notch, pushing more than ever working to provide more tools for the market – especially the virtual events sphere,” stated Wilson. Speaking more generally, both Van Gent and Wilson shared their thoughts on how this type of show might manifest in the future of music. “XR might not be tourable in the near future but I certainly believe that it will be the ‘go-to’ solution for upcoming music videos,” stated Wilson. “People are beginning to understand the technology and what can be achieved,” continued Van Gent. “If you were to suggest the likelihood of an XR performance before 2020, most people would have laughed. Now, there have been a few examples which have opened our eyes and put even greater faith in creative teams, such as ours, to produce some great looking shows.” TPi Photos: Boxcat Design www.boxcatdesign.co.uk www.jonasblue.com/ 44