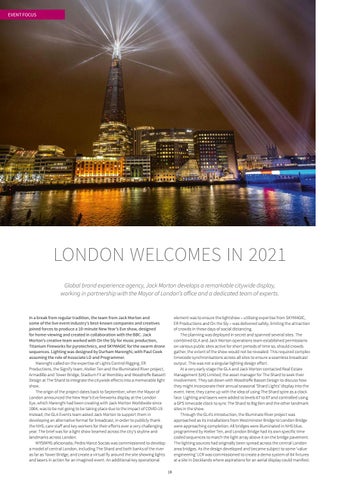 LONDON WELCOMES IN 2021 Global brand experience agency, Jack Morton develops a remarkable citywide display, working in partnership with the Mayor of London’s office and a dedicated team of experts.

In a break from regular tradition, the team from Jack Morton and some of the live event industry’s best-known companies and creatives joined forces to produce a 10-minute New Year’s Eve show, designed for home-viewing and created in collaboration with the BBC. Jack Morton’s creative team worked with On the Sly for music production, Titanium Fireworks for pyrotechnics, and SKYMAGIC for the swarm drone sequences. Lighting was designed by Durham Marenghi, with Paul Cook assuming the role of Associate LD and Programmer. Marenghi called on the expertise of Lights Control Rigging, ER Productions, the Signify team, Atelier Ten and the Illuminated River project, Armadillo and Tower Bridge, Stadium FX at Wembley and Woodroffe Bassett Design at The Shard to integrate the citywide effects into a memorable light show. The origin of the project dates back to September, when the Mayor of London announced the New Year’s Eve fireworks display at the London Eye, which Marenghi had been creating with Jack Morton Worldwide since 2004, was to be not going to be taking place due to the impact of COVID-19. Instead, the GLA Events team asked Jack Morton to support them in developing an alternative format for broadcast, in order to publicly thank the NHS, care staff and key workers for their efforts over a very challenging year. The brief was for a light show beamed across the city’s skyline and landmarks across London. WYSIWYG aficionado, Pedro Marcé Socias was commissioned to develop a model of central London, including The Shard and both banks of the river as far as Tower Bridge, and create a virtual fly around the site showing lights and lasers in action for an imagined event. An additional key operational

element was to ensure the lightshow – utilising expertise from SKYMAGIC, ER Productions and On the Sly – was delivered safely, limiting the attraction of crowds in these days of social distancing. The planning was deployed in secret and spanned several sites. The combined GLA and Jack Morton operations team established permissions on various public sites active for short periods of time so, should crowds gather, the extent of the show would not be revealed. This required complex timecode synchronisations across all sites to ensure a seamless broadcast output. This was not a singular lighting design effort. At a very early stage the GLA and Jack Morton contacted Real Estate Management (UK) Limited, the asset manager for The Shard to seek their involvement. They sat down with Woodroffe Basset Design to discuss how they might incorporate their annual seasonal ‘Shard Lights’ display into the event. Here, they came up with the idea of using The Shard spire as a clock face. Lighting and lasers were added to levels 67 to 87 and controlled using a GPS timecode clock to sync The Shard to Big Ben and the other landmark sites in the show. Through the GLA’s introduction, the Illuminate River project was approached as its installations from Westminster Bridge to London Bridge were approaching completion. All bridges were illuminated in NHS blue, programmed by Atelier Ten, and London Bridge had its own specific time coded sequences to match the light array above it on the bridge pavement. The lighting sources had originally been spread across the central London area bridges. As the design developed and became subject to some ‘value engineering’ LCR was commissioned to create a demo system of 84 fixtures at a site in Docklands where aspirations for an aerial display could manifest. 18