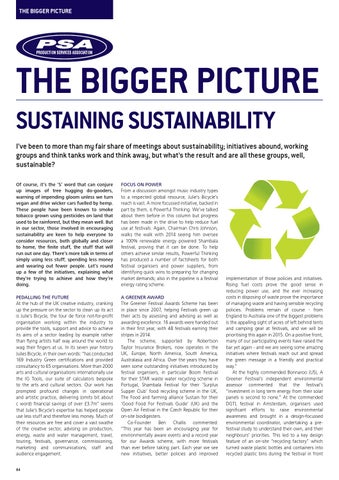 THE BIGGER PICTURE SUSTAINING SUSTAINABILITY I’ve been to more than my fair share of meetings about sustainability; initiatives abound, working groups and think tanks work and think away, but what’s the result and are all these groups, well, sustainable? Of course, it’s the ‘S’ word that can conjure up images of tree hugging do-gooders, warning of impending gloom unless we turn vegan and drive wicker cars fuelled by hemp. These people have been known to smoke tobacco grown using pesticides on land that used to be rainforest, but they mean well. But in our sector, those involved in encouraging sustainability are keen to help everyone to consider resources, both globally and closer to home, the finite stuff, the stuff that will run out one day. There’s more talk in terms of simply using less stuff; spending less money and wearing out fewer people. Let’s round up a few of the initiatives, explaining what they’re trying to achieve and how they’re doing.

FOCUS ON POWER From a discussion amongst music industry types to a respected global resource, Julie’s Bicycle’s reach is vast. A more focussed initiative, backed in part by them, is Powerful Thinking. We’ve talked about them before in this column but progress has been made in the drive to help reduce fuel use at festivals. Again, Chairman Chris Johnson, walks the walk with 2014 seeing him oversee a 100% renewable energy powered Shambala festival, proving that it can be done. To help others achieve similar results, Powerful Thinking has produced a number of factsheets for both festival organisers and power suppliers, from identifying quick wins to preparing for changing market demands; also in the pipeline is a festival energy rating scheme.

PEDALLING THE FUTURE At the hub of the UK creative industry, cranking up the pressure on the sector to clean up its act is Julie’s Bicycle, the tour de force not-for-profit organisation working within the industry to provide the tools, support and advice to achieve its aims of a sector leading by example rather than flying artists half way around the world to wag their fingers at us. In its seven year history Julies Bicycle, in their own words: “has conducted 169 Industry Green certifications and provided consultancy to 65 organisations. More than 2000 arts and cultural organisations internationally use the IG Tools, our suite of calculators bespoke to the arts and cultural sectors. Our work has prompted profound changes in operational and artistic practice, delivering (omits bit about c word) financial savings of over £3.7m” seems that Julie’s Bicycle’s expertise has helped people use less stuff and therefore less money. Much of their resources are free and cover a vast swathe of the creative sector, advising on production, energy, waste and water management, travel, touring, festivals, governance, commissioning, marketing and communications, staff and audience engagement.

A GREENER AWARD The Greener Festival Awards Scheme has been in place since 2007, helping Festivals green up their acts by assessing and advising as well as awarding excellence. 16 awards were handed out in their first year, with 48 festivals earning their stripes in 2014. The scheme, supported by Robertson Taylor Insurance Brokers, now operates in the UK, Europe, North America, South America, Australasia and Africa. Over the years they have seen some outstanding initiatives introduced by festival organisers, in particular Boom Festival for their STAR waste water recycling scheme in Portugal, Shambala Festival for their ‘Surplus Supper Club’ food recycling scheme in the UK, The Food and farming alliance Sustain for their ‘Good Food For Festivals Guide’ (UK) and the Open Air Festival in the Czech Republic for their on-site biodigesters. Co-Founder Ben Challis commented: “This year has been an encouraging year for environmentally aware events and a record year for our Awards scheme, with more festivals than ever before taking part. Each year we see new initiatives, better policies and improved

implementation of those policies and initiatives. Rising fuel costs prove the good sense in reducing power use, and the ever increasing costs in disposing of waste prove the importance of managing waste and having sensible recycling policies. Problems remain of course - from England to Australia one of the biggest problems is the appalling sight of acres of left behind tents and camping gear at festivals, and we will be prioritising this again in 2015. On a positive front, many of our participating events have raised the bar yet again - and we are seeing some amazing initiatives where festivals reach out and spread the green message in a friendly and practical way.” At the highly commended Bonnaroo (US), A Greener Festival’s independent environmental assessor commented that the festival’s “investment in long term energy from their solar panels is second to none.” At the commended DGTL festival in Amsterdam, organisers used significant efforts to raise environmental awareness and brought in a design-focussed environmental coordinator, undertaking a prefestival study to understand their own, and their neighbours’ priorities. This led to a key design feature of an on-site “recycling factory” which turned waste plastic bottles and containers into recycled plastic bins during the festival in front

TPi, the definitive magazine for live entertainment design and technology. This months production profiles include the Lady Gaga, Linkin Park, Kasabian and the 25th Anniversary of the fall of the Beriln Wall concert. Plus all of the usual coverage of products, people, companies and trade shows.