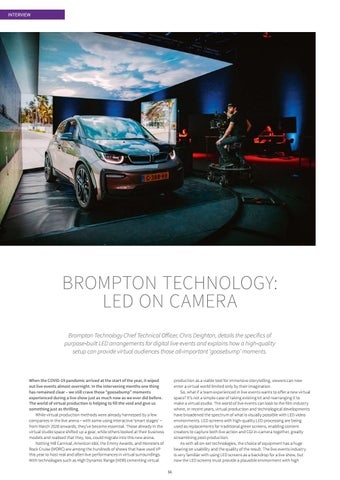 When the COVID-19 pandemic arrived at the start of the year, it wiped out live events almost overnight. In the intervening months one thing has remained clear – we still crave those “goosebump” moments experienced during a live show just as much now as we ever did before. The world of virtual production is helping to fill the void and give us something just as thrilling. While virtual production methods were already harnessed by a few companies in the live arena – with some using interactive ‘smart stages’ – from March 2020 onwards, they’ve become essential. Those already in the virtual studio space shifted up a gear, while others looked at their business models and realised that they, too, could migrate into this new arena. Notting Hill Carnival, American Idol, the Emmy Awards, and Monsters of Rock Cruise (MORC) are among the hundreds of shows that have used VP this year to host real and often live performances in virtual surroundings. With technologies such as High Dynamic Range (HDR) cementing virtual

production as a viable tool for immersive storytelling, viewers can now enter a virtual world limited only by their imagination. So, what if a team experienced in live events wants to offer a new virtual space? It’s not a simple case of taking existing kit and rearranging it to make a virtual studio. The world of live events can look to the film industry where, in recent years, virtual production and technological developments have broadened the spectrum of what is visually possible with LED video environments. LED screens with high-quality LED processing are being used as replacements for traditional green screens, enabling content creators to capture both live action and CGI in-camera together, greatly streamlining post-production. As with all on-set technologies, the choice of equipment has a huge bearing on usability and the quality of the result. The live events industry is very familiar with using LED screens as a backdrop for a live show, but now the LED screens must provide a plausible environment with high 56