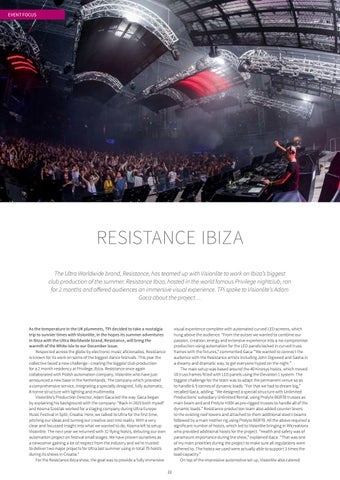 RESISTANCE IBIZA The Ultra Worldwide brand, Resistance, has teamed up with Visionlite to work on Ibiza’s biggest club production of the summer. Resistance Ibiza, hosted in the world famous Privilege nightclub, ran for 2 months and offered audiences an immersive visual experience. TPi spoke to Visionlite’s Adam Gaca about the project…

As the temperature in the UK plummets, TPi decided to take a nostalgia trip to sunnier times with Visionlite, in the hopes its summer adventures in Ibiza with the Ultra Worldwide brand, Resistance, will bring the warmth of the White Isle to our December issue. Respected across the globe by electronic music aficionados, Resistance is known for its work on some of the biggest dance festivals. This year the collective faced a new challenge - creating the biggest club production for a 2 month residency at Privilege, Ibiza. Resistance once again collaborated with Polish automation company, Visionlite who have just announced a new base in the Netherlands. The company which provided a comprehensive service, integrating a specially designed, fully automatic, 8-tonne structure with lighting and multimedia. Visionlite’s Production Director, Adam Gaca led the way. Gaca began by explaining his background with the company: “Back in 2015 both myself and Kosma Szostak worked for a staging company during Ultra Europe Music Festival in Split, Croatia. Here, we talked to Ultra for the first time, pitching our ideas and turning our creative zest into reality. With a very clear and focussed insight into what we wanted to do, Kosma left to setup Visionlite. The next year we returned with 32 flying hoists, debuting our own automation project on festival small stages. We have proven ourselves as a newcomer gaining a lot of respect from the industry and we’re trusted to deliver two major projects for Ultra last summer using in total 75 hoists during its shows in Croatia.” For the Resistance Ibiza show, the goal was to provide a fully immersive

visual experience complete with automated curved LED screens, which hung above the audience. “From the outset we wanted to combine our passion, creation, energy and extensive experience into a no-compromise production using automation for the LED panels locked in curved truss frames with the fixtures,” commented Gaca. “We wanted to connect the audience with the Resistance artists including John Digweed and Sasha in a dreamy and dramatic way, to get everyone hyped on the night.” The main setup was based around the 40 Kinesys hoists, which moved 10 truss frames fitted with LED panels using the Elevation 1 system. The biggest challenge for the team was to adapt the permanent venue so as to handle 6.5 tonnes of dynamic loads. “For that we had to dream big,” recalled Gaca, adding: “We designed a special structure with Unlimited Productions’ subsidiary Unlimited Rental, using Prolyte BGR70 trusses as main beam and and Prolyte H30V as pre-rigged trusses to handle all of the dynamic loads.” Resistance production team also added counter levers to the existing roof towers and attached to them additional steel I-beams followed by a main mother rig using Prolyte BGR70. All the above required a significant number of hoists, which led to Visionlite bringing in WIcreations who provided additional hoists for the project. “Health and safety was of paramount importance during the show,” explained Gaca. “That was one of my main priorities during the project to make sure all regulations were adhered to. The hoists we used were actually able to support 3 times the load capacity.” On top of the impressive automotive set up, Visionlite also catered 22