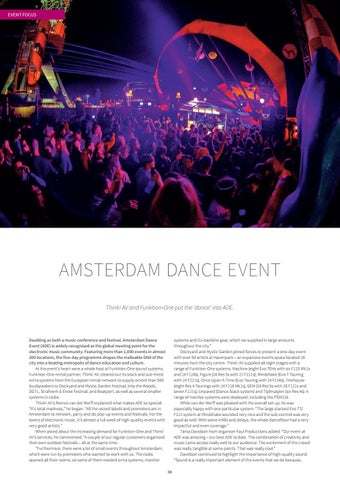 Doubling as both a music conference and festival, Amsterdam Dance Event (ADE) is widely recognised as the global meeting point for the electronic music community. Featuring more than 1,000 events in almost 200 locations, the five-day programme shapes the malleable DNA of the city into a beating metropolis of dance education and culture. At the event’s heart were a whole host of Funktion-One sound systems. Funktion-One rental partner, Think! AV, cleared out its stock and sub-hired extra systems from the European rental network to supply omore than 560 loudspeakers to Dockyard and Mystic Garden Festival, Into the Woods, DGTL, Strafwerk & Elrow Festival, and Beatport, as well as several smaller systems in clubs. Think! AV’s Remco van der Werff explained what makes ADE so special: “It’s total madness,” he began. “All the record labels and promoters are in Amsterdam to network, party and do pop-up events and festivals. For the lovers of electronic music, it’s almost a full week of high-quality events with very good artists.” When asked about the increasing demand for Funktion-One and Think! AV’s services, he commented: “A couple of our regular customers organised their own outdoor festivals – all at the same time. “Furthermore, there were a lot of small events throughout Amsterdam, which were run by promoters who wanted to work with us. The clubs opened all their rooms, so some of them needed extra systems, monitor

systems and DJ-backline gear, which we supplied in large amounts throughout the city.” Dockyard and Mystic Garden joined forces to present a one-day event with over 50 artists at Havenpark – an expansive events space located 20 minutes from the city centre. Think! AV supplied all eight stages with a range of Funktion-One systems: Machine (eight Evo 7EHs with six F215 Mk2s and 24 F124s), Figure (16 Res 5s with 21 F221s), Mindshake (Evo 7 Touring with 24 F221s), Once Upon A Time (Evo Touring with 24 F124s), Treehouse (eight Res 4 Tourings with 24 F218 Mk1s), GEM (16 Res 5s with 28 F121s and seven F221s), Unpaved (Dance Stack system) and Tijdmasjien (six Res 4s). A range of monitor systems were deployed, including the PSM318. While van der Werff was pleased with the overall set-up, he was especially happy with one particular system: “The large stacked Evo 7T/ F221 system at Mindshake sounded very nice and the sub-control was very good as well. With some infills and delays, the whole dancefloor had a very impactful and even coverage.” Tania Davidson from organiser Faul Productions added: “Our event at ADE was amazing – our best ADE to date. The combination of creativity and music came across really well to our audience. The excitement of the crowd was really tangible at some points. That was really cool.” Davidson continued to highlight the importance of high-quality sound. “Sound is a really important element of the events that we do because, 08