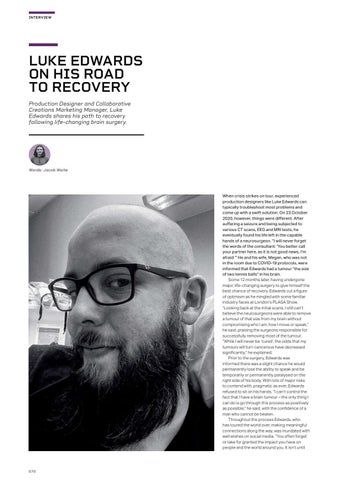 When crisis strikes on tour, experienced production designers like Luke Edwards can typically troubleshoot most problems and come up with a swift solution. On 23 October 2020, however, things were different. After suffering a seizure and being subjected to various CT scans, EEG and MRI tests, he eventually found his life left in the capable hands of a neurosurgeon. “I will never forget the words of the consultant: ‘You better call your partner here, as it is not good news, I’m afraid.’” He and his wife, Megan, who was not in the room due to COVID-19 protocols, were informed that Edwards had a tumour “the size of two tennis balls” in his brain. Some 12 months later, having undergone major, life-changing surgery to give himself the best chance of recovery, Edwards cut a figure of optimism as he mingled with some familiar industry faces at London’s PLASA Show. “Looking back at the initial scans, I still can’t believe the neurosurgeons were able to remove a tumour of that size from my brain without compromising who I am, how I move or speak,” he said, praising the surgeons responsible for successfully removing most of the tumour. “While I will never be ‘cured’, the odds that my tumours will turn cancerous have decreased significantly,” he explained. Prior to the surgery, Edwards was informed there was a slight chance he would permanently lose the ability to speak and be temporarily or permanently paralysed on the right side of his body. With lots of major risks to contend with, pragmatic as ever, Edwards refused to sit on his hands. “I can’t control the fact that I have a brain tumour – the only thing I can do is go through this process as positively as possible,” he said, with the confidence of a man who cannot be beaten. Throughout the process Edwards, who has toured the world over, making meaningful connections along the way, was inundated with well wishes on social media. “You often forget or take for granted the impact you have on people and the world around you. It isn’t until