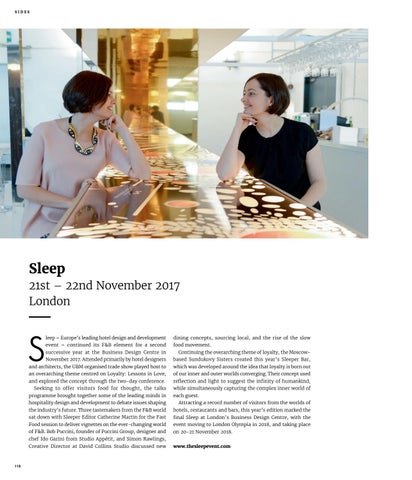 dining concepts, sourcing local, and the rise of the slow

event – continued its F&amp;B element for a second

successive year at the Business Design Centre in

Continuing the overarching theme of loyalty, the Moscow-

and architects, the UBM organised trade show played host to

which was developed around the idea that loyalty is born out

an overarching theme centred on Loyalty: Lessons in Love,

of our inner and outer worlds converging. Their concept used

and explored the concept through the two-day conference.

reflection and light to suggest the infinity of humankind,

Seeking to offer visitors food for thought, the talks

while simultaneously capturing the complex inner world of

programme brought together some of the leading minds in

Attracting a record number of visitors from the worlds of

the industry’s future. Three tastemakers from the F&amp;B world

hotels, restaurants and bars, this year’s edition marked the

sat down with Sleeper Editor Catherine Martin for the Fast

final Sleep at London’s Business Design Centre, with the

Food session to deliver vignettes on the ever-changing world

event moving to London Olympia in 2018, and taking place

of F&amp;B. Bob Puccini, founder of Puccini Group, designer and

Supper is a quarterly publication from the people behind leading international hotel design magazine Sleeper, covering the global hotel F&B sector. Supper explores how F&B concepts and brands are developed and how products, produce and personalities interact to deliver a coherent guest experience.