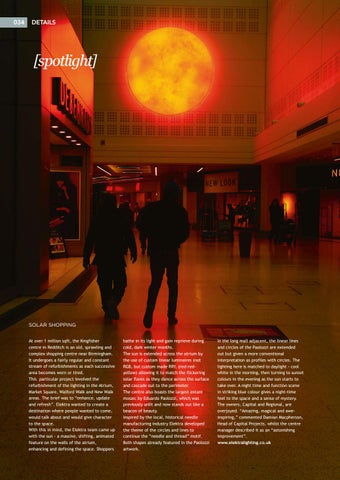 SOLAR SHOPPING At over 1 million sqft, the Kingfisher centre in Redditch is an old, sprawling and complex shopping centre near Birmingham. It undergoes a fairly regular and constant stream of refurbishments as each successive area becomes worn or tired. This particular project involved the refurbishment of the lighting in the Atrium, Market Square, Walford Walk and New Walk areas. The brief was to “enhance, update and refresh”. Elektra wanted to create a destination where people wanted to come, would talk about and would give character to the space. With this in mind, the Elektra team came up with the sun - a massive, shifting, animated feature on the walls of the atrium, enhancing and defining the space. Shoppers

bathe in its light and gain reprieve during cold, dark winter months. The sun is extended across the atrium by the use of custom linear luminaires (not RGB, but custom made RRY, (red-redyellow) allowing it to match the flickering solar flares as they dance across the surface and cascade out to the perimeter. The centre also boasts the largest extant mosaic by Eduardo Paolozzi, which was previously unlit and now stands out like a beacon of beauty. Inspired by the local, historical needle manufacturing industry Elektra developed the theme of the circles and lines to continue the “needle and thread” motif. Both shapes already featured in the Paolozzi artwork.

In the long mall adjacent, the linear lines and circles of the Paolozzi are extended out but given a more conventional interpretation as profiles with circles. The lighting here is matched to daylight – cool white in the morning, then turning to sunset colours in the evening as the sun starts to take over. A night time and function scene in striking blue colour gives a night-time feel to the space and a sense of mystery. The owners, Capital and Regional, are overjoyed. “Amazing, magical and aweinspiring,” commented Damian Macpherson, Head of Capital Projects, whilst the centre manager described it as an “astonishing improvement”. www.elektralighting.co.uk