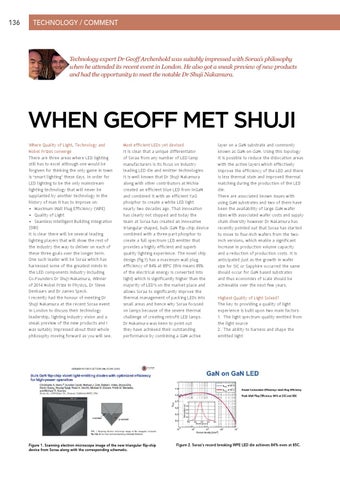 Technology expert Dr Geoff Archenhold was suitably impressed with Soraa’s philosophy when he attended its recent event in London. He also got a sneak preview of new products and had the opportunity to meet the notable Dr Shuji Nakamura.

WHEN GEOFF MET SHUJI Where Quality of Light, Technology and Nobel Prizes converge There are three areas where LED lighting still has to excel although one would be forgiven for thinking the only game in town is ‘smart lighting’ these days. In order for LED lighting to be the only mainstream lighting technology that will never be supplanted by another technology in the history of man it has to improve on: • Maximum Wall Plug Efficiency (WPE) • Quality of Light • Seamless Intelligent Building Integration (SIBI) It is clear there will be several leading lighting players that will show the rest of the industry the way to deliver on each of these three goals over the longer term. One such leader will be Soraa which has harnessed some of the greatest minds in the LED components industry including Co-Founders Dr Shuji Nakamura, Winner of 2014 Nobel Prize in Physics, Dr Steve Denbaars and Dr James Speck. I recently had the honour of meeting Dr Shuji Nakamura at the recent Soraa event in London to discuss their technology leadership, lighting industry vision and a sneak preview of the new products and I was suitably impressed about their whole philosophy moving forward as you will see.

Most efficient LEDs yet devised It is clear that a unique differentiator of Soraa from any number of LED lamp manufacturers is its focus on industry leading LED die and emitter technologies. It is well known that Dr Shuji Nakamura along with other contributors at Nichia created an efficient blue LED from InGaN and combined it with an efficient YaG phosphor to create a white LED light nearly two decades ago. That innovation has clearly not stopped and today the team at Soraa has created an innovative triangular shaped, bulk GaN flip-chip device combined with a three-part phosphor to create a full spectrum LED emitter that provides a highly efficient and superb quality lighting experience. The novel chip design (fig.1) has a maximum wall plug efficiency of 84% at 85ºC (this means 85% of the electrical energy is converted into light) which is significantly higher than the majority of LED’s on the market place and allows Soraa to significantly improve the thermal management of packing LEDs into small areas and hence why Soraa focused on lamps because of the severe thermal challenge of creating retrofit LED lamps. Dr Nakamura was keen to point out they have achieved their outstanding performance by combining a GaN active

Figure 1. Scanning electron microscope image of the new triangular flip-chip device from Soraa along with the corresponding schematic.

layer on a GaN substrate and commonly known as GaN-on-GaN. Using this topology it is possible to reduce the dislocation areas with the active layers which effectively improve the efficiency of the LED and there is less thermal stain and improved thermal matching during the production of the LED die. There are associated known issues with using GaN substrates and two of them have been the availability of large GaN wafer sizes with associated wafer costs and supply chain diversity however Dr Nakamura has recently pointed out that Soraa has started to move to four-inch wafers from the twoinch versions, which enable a significant increase in production volume capacity and a reduction of production costs. It is anticipated just as the growth in wafer size for SiC or Sapphire occurred the same should occur for GaN based substrates and thus economies of scale should be achievable over the next few years. Highest Quality of Light Solved? The key to providing a quality of light experience is built upon two main factors: 1. The light spectrum quality emitted from the light source 2. The ability to harness and shape the emitted light