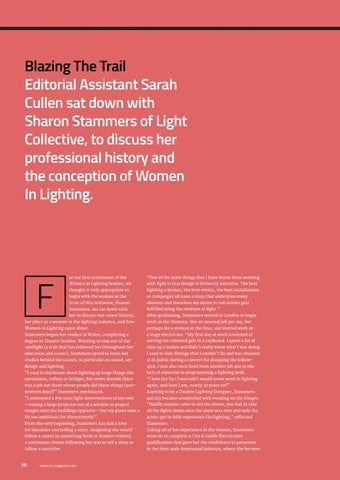 Blazing The Trail Editorial Assistant Sarah Cullen sat down with Sharon Stammers of Light Collective, to discuss her professional history and the conception of Women In Lighting.

or our first instalment of the

“One of the main things that I have learnt from working

thought it only appropriate to

Women in Lighting feature, we begin with the woman at the

front of this initiative, Sharon Stammers. arc sat down with

her to discuss her career history,

her place as a woman in the lighting industry, and how

Women in Lighting came about.

Stammers began her studies in Wales, completing a

degree in Theatre Studies. Wanting to stay out of the

spotlight (a trait that has followed her throughout her education and career), Stammers opted to focus her

studies behind the scenes, in particular on sound, set design and lighting.

“I used to daydream about lighting up large things like mountains, valleys or bridges, but never dreamt there

was a job out there where people did these things (preinternet days)!” Stammers reminisced.

images onto the buildings opposite – but my plans were a bit too ambitious for Aberystwyth!”

From the very beginning, Stammers has had a love

for literature and telling a story. Imagining she would follow a career in something book or theatre-related,

a continuous theme following her was to tell a story or follow a narrative.

with light is that design is driven by narrative. The best or campaigns all have a story that underpins every

element and therefore my desire to tell stories gets fulfilled using the medium of light.”

After graduating, Stammers moved to London to begin work in the theatres. Not an unusual job per say, but

perhaps for a woman at the time, she started work as a stage electrician. “My first day at work consisted of

sorting out coloured gels in a cupboard. I spent a lot of

time up a ladder and didn’t really know what I was doing. I used to hide fittings that I couldn’t fix and was shouted at in public during a concert for dropping the follow-

spot. I was also once fired from another job due to the lack of expertise in programming a lighting desk.

“I love the fact I was told I would never work in lighting again, and here I am, nearly 30 years on!”

Aspiring to be a Theatre Lighting Designer, Stammers

quickly became unsatisfied with working on the fringes. “Hardly anyone came to see the shows, you had to take

all the lights down once the show was over and only the actors got to fully experience the lighting,” reflected Stammers.

Taking all of her experience in the theatre, Stammers went on to complete a City &amp; Guilds Electricians

qualification that gave her the confidence to persevere

in the then male dominated industry, where she became