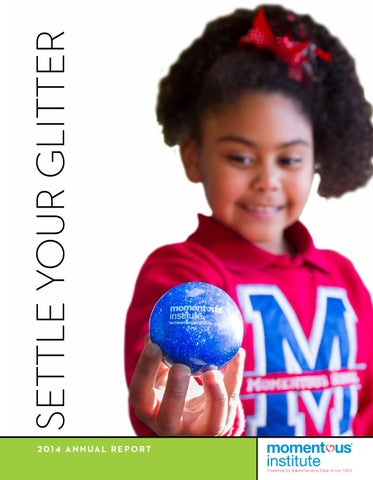 We believe in expecting momentous outcomes for all kids. More kids than ever are experiencing toxic stress, trauma and abuse — impeding their ability to build relationships and learn. There are two key ways to buffer the path for children who come from tough beginnings: • Strengthen safe relationships — in the home, school and community • Nurture self-regulation — train the brain out of fight, flight or freeze and into a calm state so kids can think clearly, connect with others and solve problems. Or said another way, help kids develop the ability to Settle their Glitter. We know that safe relationships and self-regulation make the difference and are the first steps toward strong social emotional health. We know this, but if you look at schools, day cares and homes, our daily practices have not caught up with the science.

THE GLITTER BALL: Think of a glitter ball* as your brain. When you shake it up, it’s cloudy and cluttered — the same way your brain is when you’re excited, scared or full of emotion. It’s hard to think clearly and make good decisions. If you take a minute to breathe and focus your attention, the glitter will settle. It won’t disappear — just as the challenges we face each day won’t magically go away — but now your brain is clear and calm, allowing you to make good choices. *We learned about the glitter ball from Susan Kaiser Greenland’s The Mindful Child.

Momentous Institute is devoted to helping bridge the gap between the research and our daily interactions. Salesmanship Club of Dallas has urged us to expand beyond our school and therapy centers by investing in more training and research in hopes of helping countless kids — some we may never meet. As a nation, we are experiencing one of those rare times in history when our sense of hope matches our sense of urgency. The path toward a preferred future for kids is clear. We just have to choose it.

Social emotional health for all kids so they can achieve their full potential.

Early education and social emotional health equip children with a foundation for future achievement, and I could not be more excited for Dallas ISD to learn from the incredible successes of Momentous Institute as we partner together. This coordinated effort puts our community in the best possible position to change

the odds in favor of even our most vulnerable children.

Utilize the direct work we do with families at our school and therapy centers to inform our research and training. Equip educators, mental health professionals, parents and decision makers with trauma-informed strategies and mindsets that strengthen social emotional health.

We are extremely excited and optimistic about working with Momentous Institute — a valued partner who, by sharing its successful practices, helps us learn and implement key social emotional health strategies in our large urban school system. —

THE BRAIN HAT: Whether trying to concentrate during a difficult task or celebrate an “Aha!” moment, the kids we work with love wearing the brain hat.

Even a basic understanding of how trauma impacts the brain, relationships and learning can transform how we engage with kids and families.

Safe relationships are the foundation of strong social emotional health, and the attuned, connected parent-child relationship is where it all begins. Parents are the single-most underutilized resource when it comes to improving education and mental health.

A glimpse at the 6,000 clients served

who are our families?

A snapshot of the 6,000 kids and family members we worked with directly in 2014.

all numbers rounded FoR simplicity

Places we trained States represented at our local trainings

ELPING KIDS WE WILL NEVER MEET

By training and collaborating with educators, mental health professionals and decision makers, we hope to impact the lives of far more kids than we could ever serve directly. PAG E 1 4

We feel inspired, humbled and challenged in our partnership with Momentous Institute and our collective launch of the Teach for America Dallas-Fort Worth Summer Institute. We know we have not yet scratched the surface for what we

can accomplish together to benefit students and families across North Texas. —

A capacity crowd of educators, mental health professionals and more learned about the importance of expecting momentous outcomes for kids and their families.

Conference attendees worked together to learn first-hand the effectiveness of experiential learning.

Salesmanship Club of Dallas members, our beloved Red Pants, delighted the audience with their charm.

The tremendous community involvement and support we receive extends far beyond the 18th hole, with year-round commitment from Salesmanship Club members, volunteers, donors, foundations and corporations â&amp;#x20AC;&amp;#x201D; valued partners who help make our work possible. Special thanks to the following partners (gifts received in 2014 greater than $100,000; listed in alphabetical order):

Since 1968, the outstanding support of the AT&amp;T Byron Nelson, hosted by Salesmanship Club of Dallas, has raised $137 million for Momentous Institute.