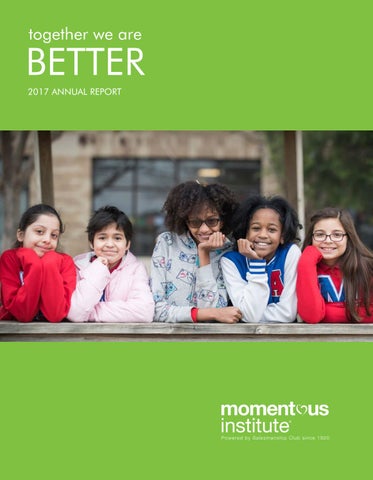 understand and manage our emotions, reactions and relationships.

We play out this commitment to the whole child in three intertwined but distinct ways: through our mental health efforts; our education efforts; and through research and training. In 2017, we served 5,777 children and family members and provided social emotional health training to 9,163 professionals, so that we could help far more children than we could ever serve directly. We do this hopeful work with a heightened sense of urgency driven by the backdrop in 2017 of increasing uncertainty for many families already dealing with heaping portions of trauma and toxic stress. And this sense of urgency extends to those who serve as emotional first responders for children and families — our teachers, therapists and trainers. Dallas, despite being an extraordinary city by anyone’s standard, is a completely different experience for affluent families than for families living in poverty. We continue to be one of the most segregated cities in the country with far too many children impacted by poverty and adverse childhood experiences. We know that African American and Latino children are disproportionately affected by poverty, toxic stress and trauma. And we know that

But we also know, that intervention — especially when grounded in safe relationships, community and a true sense of belonging — changes children’s brains and improves life trajectories. Every one of us deserves to know that we belong, that we are not invisible, and that we are an important part of the community. When we walk toward this inclusivity, our community is stronger. Because, in fact, we are better together. Thank you for being our partners, for nurturing a sense of belonging for all in our community, and for believing that Dallas can be as good a place for children

as it is for business.

OUR VISION Social emotional health for all children so they can achieve their full potential.

97 YEARS TOGETHER Since 1920, Momentous Institute, owned and operated by Salesmanship Club of Dallas, has been committed to building and repairing social emotional health for all children so they can achieve their full potential.

The Salesmanship Club of Dallas and Momentous Institute are founded with the mission to transform children’s lives.

In an effort to help more children, family therapy is offered to the community, and the main offices are relocated to Oak Cliff.

The Harry Hines location is purchased and renamed the Constantin Center in honor of their lead Capital Campaign gift.

Momentous Institute hosts its inaugural Changing the Odds Conference, aimed at sharing strategies with educators, mental health professionals and influencers from across the country.

Momentous Institute opens a second campus in northwest Dallas on Harry Hines, providing a range of therapeutic services to children and families.

In an effort to expand the organizationâ&amp;#x20AC;&amp;#x2122;s model of excellence in social emotional health, the agency undergoes a comprehensive rebranding and changes its name from Salesmanship Club Youth and Family Centers to Momentous Institute.

Salesmanship Club of Dallas and Momentous Institute make the decision to begin traditional development efforts and invest in research and training to reach far more children than could ever be served directly.

Momentous Institute is engaged in intensive partnerships to disseminate our model in Dallas, Fort Worth, Plano, Memphis and Glynn County, Georgia.

In addition to the 5,500 children and family members served by direct programming, more than 10,000 educators, mental health professionals and influencers receive training by Momentous Institute.

TOGETHER &quot;Never ever give up.” — Momentous School student

&quot;First of all, thank God Momentous Institute exists. The nice thing ́ how can I help you?’ I like that I’m not alone.

is that no one is judged. They simply say, That’s why I’m successful and my son is successful.” — Momentous School parent

&quot;My teachers have learned above all that they canâ&amp;#x20AC;&amp;#x2122;t teach children to be themselves. Momentous has taken our campus to the next level, and

SOCIAL EMOTIONAL HEALTH Our model for social emotional health begins with safe relationships. Building on that strong foundation, we teach children how to self-regulate and build their awareness of self, which gives them the capacity to better understand others and ultimately become a changemaker in our society.

AWARENESS OF SELF Gratitude

LIVES TRANSFORMED A snapshot of the 5,777 kids and family members we directly served in 2017.

Therapeutic Services Where are clients being seen?

of children with an identified social, emotional and/or behavioral challenge significantly improved their functioning

Percentage of clients by age

The Changing the Odds conference is one example of our investment in research and training to reach far more children than we could ever serve directly. Our direct work with families helps equip educators, mental health professionals, parents and influencers with trauma informed strategies that strengthen social emotional health.

Helping far more children than we could ever serve directly by investing in research and training.

of all trained work in the Dallas-Fort Worth area

Bryan Stevenson shared his three ideas for how we can create change: get proximate, stay hopeful, and change the narrative. Journeyman Ink engaged with the attendees through spoken word and a custom-designed art piece made during their performance.

An attendee draws a happy moment during Janne Willemsâ&amp;#x20AC;&amp;#x2122; presentation, Seize Your Moments.

Michelle Gielan shared research on how positive psychology is used to help create a positive environment.

TOGETHER WE TRANSFORM LIVES Since 1968, the AT&amp;T Byron Nelson, hosted by the Salesmanship Club of Dallas, has raised over $155 million to benefit Momentous Institute.

Momentous Institute students watch as a golfer tees off for the 2017 AT&amp;T Byron Nelson

&quot;Our ofďŹ cial motto is &#39;Never Say No,&#39; which is why the AT&amp;T Byron Nelson is so important to us. We work there every year because we know it is for the kids.&quot; â&amp;#x20AC;&amp;#x201D; Foster Reese, Salesmanship Club of Dallas member

TOGETHER WE PARTNER Special thanks to our valued partners — volunteers, donors, foundations and corporations — who help make our work possible (gifts greater than $100,000 made directly to Momentous Institute in 2017 reflected below).

&quot;We are stronger together because we are more complete when working together. It is the very best part of a community.&quot; — Sarah Cotton Nelson, Communities Foundation of Texas