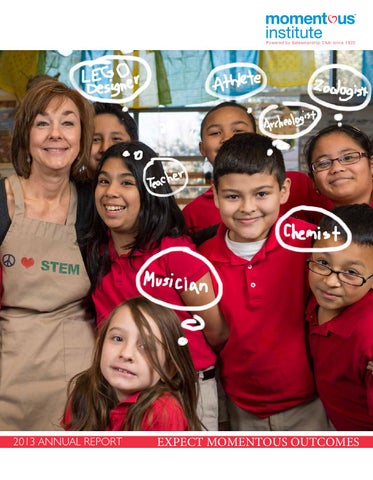 Because lives are transformed when a community prioritizes childrenâ&amp;#x20AC;&amp;#x2122;s social emotional health.

In 2013, we focused on possibility and potential, in the lives of kids and families, and in our own work. We developed a bold, ambitious vision for the future â&amp;#x20AC;&amp;#x201D; and knew it was time for a new name. In 2014, Salesmanship Club Youth and Family Centers becomes Momentous Institute, powered by Salesmanship Club since 1920. Momentous, because after nearly a century of working with kids and families, we see the power of expecting momentous outcomes. Momentous, because we know building and repairing social and emotional health creates a strong and vitally important foundation for all children. Momentous, because we are determined to help kids we will never meet by increasing our investment in research and training. We are looking for exponential impact, so more kids go on to achieve their full potential. People rise to expectations and we â&amp;#x20AC;Ś expect momentous.

At Momentous Institute, we focus on building and repairing social emotional health so kids can achieve their full potential. In case you were wonderingâ&amp;#x20AC;Ś .

PROBLEMS • I n Dallas County, 1 in 4 residents live in poverty — households that earn less than $24,000 per year for a family of four. • By age 4, children who live below the poverty line are already 18 months behind their peers. At age 10, that gap is still present.

One in five children have a diagnosable emotional or behavioral problem, and 75 percent of kids do not receive the needed mental health services.

SOLUTIONS • Start early and engage parents. • Focus on social emotional health. • Combine strong relationships with high expectations. • Use an integrated approach to education and mental health. • Share proven strategies with educators and mental health professionals nationwide so we can help kids we will never meet.

To change the odds for kids, we have several key programs, including: • Our school, for students ages 3 years old through 5th grade in the Oak Cliff neighborhood of Dallas • A therapeutic preschool in Northwest Dallas for young children whose challenging behaviors have resulted in their expulsion from other preschools • Other therapeutic services, including play therapy, group therapy, parent education, and family therapy

Our 2013 school results prove that long-term success is possible when interventions start early.

We help kids growing up in poverty transform their lives by building and repairing social emotional health. Learning about their brain, self-regulation, problem solving, and understanding others leads to kids achieving their full potential.

• 97 percent advanced to higher education • 90 percent of our college freshmen re-enrolled for their sophomore year.

We are committed to strengthening family bonds and developing parents’ confidence and competence so they can be strong advocates for their children at home and school. • Each of our students receives a home visit from their teacher prior to the beginning of the school year. • Parents fulfill volunteer participation requirements — 12 days annually — by engaging in several activities, such as serving breakfast and lunch to our students.

“ We are not born being parents. We are not going to be perfect, but after coming here for 10 weeks, my family communicates better. We understand that we have different perspectives and different ways to think.”

EXPECT MOMENTOUS “ I’ve always believed that families possess these strengths already and it’s about them finding a way to rediscover those strengths. Once they do, wonderful things happen.”

Encouraging children to meet challenging expectations communicates a belief in their potential. Each year, our students achieve outstanding academic success, all built on the foundation of prioritizing both rigorous academics and social emotional health.

EXPANDING OUR REACH Our goal is to share proven practices and learn from others, partnering with the nation’s best and brightest in education and mental health so we can help kids we will never meet. In September, we presented our 2nd annual Changing the Odds conference, featuring keynote speaker Paul Tough, author of “How Children Succeed,” and Dr. Tina Payne Bryson, co-author of “The Whole Brain Child.” A capacity crowd of 800 professionals learned about cultivating resilience and perseverance in children. We presented 34 additional training seminars and workshops in 2013, attracting over 1,500 educators and mental health professionals. We also worked intensively with more than 40 trainees, including three American Psychological Association-approved predoctoral interns and 10 University of Texas Southwestern psychiatry fellows.

“ Momentous Institute is a leader in understanding the importance of integrating mental health and education. They have been developing programs for more than 90 years, which is why their trainings have so much depth. They are true collaborators and we are proud to partner with them.” — David J. Chard, Ph.D., Dean, Simmons School of Education and Human Development, Southern Methodist University

KIDS ARE AT THE HEART ... of everything we do. That is what inspires all our supporters, from Salesmanship Club members and volunteers to donors and corporations.

The strengthening of social emotional health that we teach daily to kids and families? That same boost to one’s happiness and sense of purpose is felt every time someone gives back to the community. In addition to the outstanding annual HP Byron Nelson Championship — which has raised $132 million for Momentous Institute since 1968 — we are grateful for the yearround support and commitment of so many. Special thanks go to the following partners (gifts received in 2013 greater than $100,000; listed in alphabetical order):

who are our families?

programdiscontinued discontinuedFall Fall2013 2013 program A SNAPSHOT OF THE 7,000 LIVES IMPACTED IN 2013

all numbers rounded down for simplicity

OUR FAMILIES who are our families?

Thank you for investing in Momentous futures.