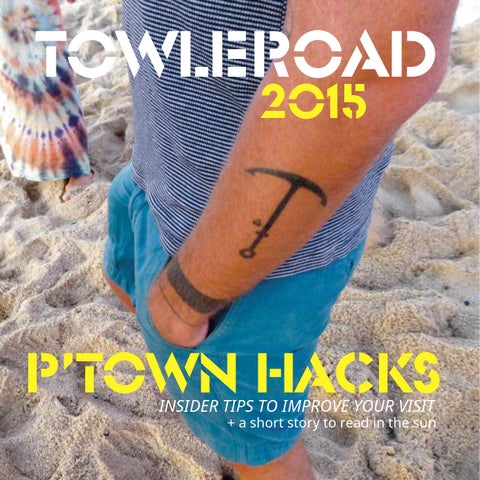 + a short story to read in the sun

WELCOME TO PROVINCETOWN! We hope you have a great time, look forward to meeting you, and hope that this guide makes for a richer stay. Let us know what you think and send us your P'town hacks (tips@towleroad.com) to share on the site or in next year’s guide. — Andy Towle and Michael Goff

On behalf of the Office of Tourism and the Visitor Services Board, I am delighted to welcome you to a destination like nowhere else. Provincetown is the oldest continuous art colony in America and the birthplace of the Modern American Theater. We have been named "best resort town" and two of our beaches are included in the country's top ten. P’town is proud of its diversity and has become the number one destination for same sex weddings. We look forward to you visiting again. — Tony Fuccillo, Director of Tourism

A BRIEF HISTORY OF PROVINCETOWN

Watch out for poison ivy in the dunes. It is plentiful and will ruin your vacation.

When walking to the breakwater pay attention to the tide, because it's going to be your iPhone’s first swim if you don't time it wisely...

When hiking to Boy Beach through the dunes, be prepared to wade through waist-high water at times. Prepare to transport your belongings on your head. There are no ‘concessions’ stands at Boy Beach or Race Point. Bring food and drink with you.

Up to 6 ft at Race Point and Herring Cove beaches in the National Seashore. (except lifeguarded areas, near nesting shore birds, and on bike trails)

BONUSHack CAT HACK: Keep them inside. There HAck Hack Hack address are foxes (and dogs) all over town.

Get your food, supplies, toys, and doggie day care at the Provincetown Pet Resort 79 Shank Painter Rd 508-487-7900 From 5-7 on Wednesdays, enjoy a cocktail with your dog at Yappy Hour at Shipwreck Lounge. 12 Carver St. Gift bags with treats.

POINT TO BREAKWATER “Head out to the light house at Long Point at the very tip of Cape Cod for amazing views of Provincetown. Take the Flyer’s boat shuttle which leaves from McMillan Pier or Flyer’s Boatyard in the West End. Pack a lunch to enjoy this beautiful beach and the keep an eye out for seals and whales. Walk back on the rock jetty that connects to the mainland. Be sure to wear sneakers to navigate the rocks and check the tides, as part of the jetty is under water at high tide.”

WATERSPORTS Rent paddleboards and kayaks at Flyer’s Boat Rental (133 Commercial) or Provincetown AquaSports (333r Commercial). At the latter, you can take a $25 yoga paddleboarding class from SUP Floating Fitness and Yoga. It’s a great way to see dolphin, seals, birds, and (if you’re super lucky) whales inside the harbor when the waves are calm.

VIRTUAL Pâ&#x20AC;&#x2122;TOWN The Provincetown Tourism Office offers a new mobile app called "iPtown" that lists just about everything the town has to offer along with maps, links to reservation and review sites and a complete integration with social media.

For anyone comfortable on a bicycle, the Cape Cod HAck Hack National Seashore provides nearly 10 miles of stunning, HAck sometimes challenging and hilly bike trails (red dashed lines on opposite page) which loop from Herring Cove to Race Point Beach and around to the lush ponds of the Beech Forest. Itâ&#x20AC;&#x2122;s a great way to unwind. Andy Towle Towleroad

The Last Fagbash and other Stories from Provincetown

Austin Dale is a 24-year-old writer from Massachusetts and a recent transplant to Los Angeles. He works as an assistant to the writers of the original series Transparent.

“The Last Fagbash and Other Stories from Provincetown” by Austin Dale originally appeared in Issue #5 of hello mr., available online at hellomrmag.com and at fine newsstands.

In need of a theme party costume? Marine Specialties is an Army/Navy shop in the center of town crammed with gear and inspiration.

Make sure to get the cash you need at the beginning of a holiday weekend because the ATMs can run out.

Go to the gym during tea dance if you aren't a drinker and prefer some quiet gym time.

Look for parking on unmarked curbs on Bradford Street.

ROOMS BY THE SEA Try a stay at the Race Point Light Keepers House, which can be arranged through the American Lighthouse Association. A very unique experience, off the beaten path. David Silva Owner, The Red Inn 15 Commercial Street

Each year Provincetown creates the perfect recipe to give visitors the most memorable, colorful and thrilling Halloween holiday experience. It's one of the most famous eerie locations on the Atlantic coast — a permanent set right `out of a studio backlot — except here the shadows, dark alleys, and misty silhouettes are enchantingly real. In the dark fog of an October night in Ptown, the ghoulish tolling of lighthouse bells ward off wayward ships. The historic cemeteries bathe in soft moonlight where ghosts of the original pilgrims are said to still haunt. Here Halloween now lasts for 10 days, giving revelers two weekends of entertainment. — Provincetown Tourism Office, 260 Commercial Street @ Ryder

This town, with a reputation as America's First Destination and one of acceptance of all people, now has two distinct weekends where the art of leather--and how one wears it--takes center stage. Each February, the town hosts Snowbound Leather Weekend, which heats up the atmosphere each year, giving attendees opportunities to wear more layers of leather. then in the fall, Mates Leather Weekend takes place, providing the rugged leather the perfect backdrop for exhibition. Provincetown Tourism Office 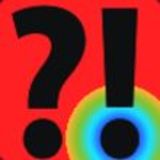 How to get the most out of your visit to Provincetown this summer!

How to get the most out of your visit to Provincetown this summer!