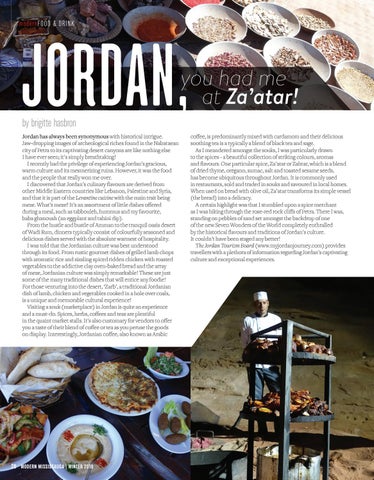 you had me at Za’atar!

Jordan has always been synonymous with historical intrigue. Jaw-dropping images of archeological riches found in the Nabataean city of Petra to its captivating desert canyons are like nothing else I have ever seen; it’s simply breathtaking! I recently had the privilege of experiencing Jordan’s gracious, warm culture and its mesmerizing ruins. However, it was the food and the people that really won me over. I discovered that Jordan’s culinary flavours are derived from other Middle Eastern countries like Lebanon, Palestine and Syria, and that it is part of the Levantine cuisine with the main trait being meze. What’s meze? It’s an assortment of little dishes offered during a meal, such as tabbouleh, hummus and my favourite, baba ghanoush (an eggplant and tahini dip). From the hustle and bustle of Amman to the tranquil oasis desert of Wadi Rum, dinners typically consist of colourfully seasoned and delicious dishes served with the absolute warmest of hospitality. I was told that the Jordanian culture was best understood through its food. From rustic gourmet dishes of grilled lamb chops with aromatic rice and sizzling spiced ridden chicken with roasted vegetables to the addictive clay oven-baked bread and the array of meze, Jordanian culture was simply remarkable! These are just some of the many traditional dishes that will entice any foodie! For those venturing into the desert, ‘Zarb’, a traditional Jordanian dish of lamb, chicken and vegetables cooked in a hole over coals, is a unique and memorable cultural experience! Visiting a souk (marketplace) in Jordan is quite an experience and a must-do. Spices, herbs, coffees and teas are plentiful in the quaint market stalls. It’s also customary for vendors to offer you a taste of their blend of coffee or tea as you peruse the goods on display. Interestingly, Jordanian coffee, also known as Arabic

coffee, is predominantly mixed with cardamom and their delicious soothing tea is a typically a blend of black tea and sage. As I meandered amongst the souks, I was particularly drawn to the spices - a beautiful collection of striking colours, aromas and flavours. One particular spice, Za’atar or Zahtar, which is a blend of dried thyme, oregano, sumac, salt and toasted sesame seeds, has become ubiquitous throughout Jordan. It is commonly used in restaurants, sold and traded in souks and savoured in local homes. When used on bread with olive oil, Za’atar transforms its simple vessel (the bread) into a delicacy. A certain highlight was that I stumbled upon a spice merchant as I was hiking through the rose-red rock cliffs of Petra. There I was, standing on pebbles of sand set amongst the backdrop of one of the new Seven Wonders of the World completely enthralled by the historical flavours and traditions of Jordan’s culture. It couldn’t have been staged any better! The Jordan Tourism Board (www.myjordanjourney.com) provides travellers with a plethora of information regarding Jordan’s captivating culture and exceptional experiences.

The digital Winter 2018 issue of Mississauga's premier and city-wide magazine. 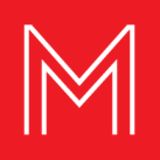