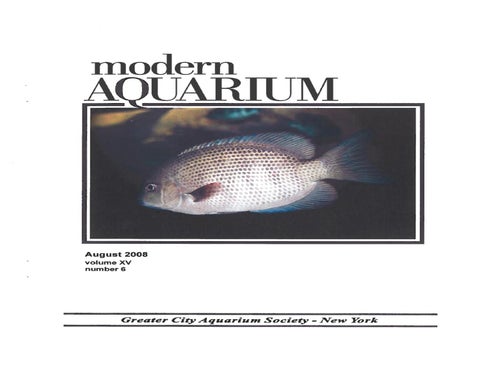 AQUARITM ON THE COVER The subject of our cover photo this month is Paretroplus menarambo, a Madagascar cichlid commonly known as the pinstripe damba. Be sure and see Susan Priest's "My Trip to Madagascar," on page 18.

In This Issue From the Editor. President's Message G.C.A.S. 2008 Program Schedule

Photo by Alexander A. Priest

My Microworm Recipe by Alexander A. Priest

My Trip to Madagascar by Susan Priest

And I Think to Myself, What a Wonderful World! by Desiree Martin

Articles submitted for consideration in Modern Aquarium must be received no later than the 10th day of the month, three months prior to the month of publication. Please fax to (877) 299-0522, or email to gcas@earthlink.net. Copyright 2008 by the Greater City Aquarium Society Inc., a not-for-profit New York State corporation. All rights reserved. Not-for-profit aquarium societies are hereby granted permission to reproduce articles and illustrations from this publication, unless the article indicates that the copyrights have been retained by the author, and provided reprints indicate source and two copies of the publication are sent to the Exchange Editor of this magazine. Any other reproduction or commercial use of the material in this publication is prohibited without express written prior permission. The Greater City Aquarium Society meets every month, except January and February. Members receive notice of meetings in the mail. For more information, contact: Joe Ferdenzi (516) 484-0944. Find out more, or leave us a message, at our Internet Home Page at: http://www.greatercity.org or http://www.greatercity.com