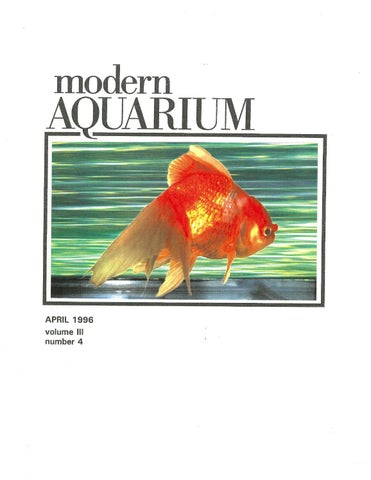 scoop the catfish out. It was then gingerly lowered into a 5 gallon bucket, half filled with water from its home tank. I would fill another 2 gallon container with more home tank water. This way, at the show, its show tank would be completely filled with its own home water. (The fish goes through enough; it doesn&#39;t need strange water.) Early on, I used the 2V4 gallon tanks provided by the host club. Later on, though, I took to bringing my own 5V4 gallon tank so that the fish would have more space. I always used an airstone or a sponge filter in the show tank because of the size of the angelicus. (With small fish, under three inches, I almost never bother with that.) The other important thing to do is something you shouldn&#39;t do â&amp;#x20AC;&amp;#x201D; you shouldn&#39;t feed your fish the day before or the day of the show. The fasting won&#39;t hurt your fish. However, if you feed it, and it then pollutes its small show tank, then you have

trouble. Not only does it stress your fish, but it looks messy (and some judges view that as a negative). Anyway, after I stopped entering it in shows, it continued to look healthy and vigorous. It would often come to the surface of the water at feeding time and suck a food tablet out of my fingers. However, in the week it died, it suddenly (in one day) went from a healthy looking fish to a fish with frayed fins, red at the base, and its body covered in a white-grey slime. I tried an antibiotic for several days, but the angelicus eventually succumbed. In nine shows, spread out over six years, it had won seven 1st Places, two 2nd Places, a Reserve of Show, and a Best of Show. It had finally come time for its place in catfish heaven. Well, at least I have a few photographs to remind me of what a great fish it was (and a basement full of its trophies!).

HELP WANTED Unique opportunity for aquarium hobbyists to see the import/export of freshwater and saltwater tropical fish up close. Part time positions are currently available with Mantraco, Inc., one of the largest transhippers of fish and plants on the East Coast. Supplement your primary income, or develop a full time position. Knowledge of fish and plants, a foreign language, and a driver&#39;s license are a plus, but not required. Phone: (718)845-2800 ask for Vince FAX: (718845-5007 EMail: SERPAE@AOL.COM

An Interesting Bit of G.C.A.S. History LEE FINLEY ne of the nicer points of finding older aquarium books is not necessarily the books themselves, but the various pieces of ephemera (catalogs, business cards, newspaper clippings, etc.) that some previous owners have secreted away in them. Such is the case with my recent acquisition of a beautiful copy of the second edition (December, 1935) of Innes&#39; &quot;Exotic Aquarium Fishes.&quot; In addition to a Christmas gift tag (stating &quot;Honey-Bunch from Sweetie Pie 1936&quot;), there were three newspaper clippings present. One of these was from the January 18, 1935 &quot;Standard-Times&quot; (New Bedford, MA). While the other two lacked any indication of date or origin, they were obviously from newspapers in the New York City area. One of these is of potential interest here, in that it provides coverage of the tenth annual show of the &quot;Greater City A q u a r i u m Society of Brooklyn&quot; (The article is reprinted in its entirety on the right). Although the society now meets in Queens, in its distant past it did meet in Brooklyn (Warren Feuer, personal communication and article shown on right). Of particular interest in the article is the discussion of the neon tetra (&quot;Never seen in this show before...&quot;). This mention (which notes that the ones shown had been held &quot;...since April.&quot;) helps to place the article, which as noted above is undated. Neon tetras were first commercially imported into the United Stated in 1936 by Fred Cochu of Paramount Aquarium (Jacques

Narrowleaf Chain on the other hand has a long stem with a small leaf on top. The length is about the same one to two inches, but this plant stands straight up and looks like a blade of grass. Both of these dwarves are good foreground plants. Amazons prefer bright light. It is essential for the dwarf varieties, but all others can do well with moderate light intensity. Spectrum is important. It is best to provide a full spectrum to get the best overall growth. Duration should mimic the tropics, twelve hours on, twelve hours off. It is just as important for the plants to have a dark period as it is for them to have a light period. Fertilization should be mild or you won&#39;t get the root growth that is a sign of a strong and vibrant plant. It is important to do small water changes often. This will provide two benefits: one is that you will be replacing the micro nutrients which the plant has taken out of the old water and the other is that you will be providing turbulence in the tank causing greater gas exchange and preventing detritus from building up on and around the plants. As with all plants, don&#39;t just stick them in your tank. You can save yourself a lot of trouble by taking the time to prepare the plants prior to planting. Rinse them off with water that

Jfor Cfje Silent Auction he Silent Auction is a Greater City tradition. It is held at the April GCAS meeting and benefits Greater City (which receives any amount over the &quot;minimum bid&quot; on the item&#39;s auction card). It lets hobbyists dispose of useful but unneeded items. The rules are simple. Each item has an auction card, which is a piece of paper with an &quot;item number&quot; (assigned by GCAS), the name of the item and the name and address of the person bringing the item to the auction (the &quot;donor&quot;), and a place to indicate the condition of the item. If the entire proceeds are to be donated to GCAS (thank you, very much!), the donor circles &quot;Yes&quot; next to &quot;Donation,&quot; otherwise the donor writes in an &quot;Opening&quot; (or minimum) Bid. Whatever is bid over that figure goes to GCAS and the opening (minimum) bid goes to the donor. In the column on the right are the official rules.

is close to the temperature of the tank. Remove any dead or dying leaves, roots or stems. All too often the biggest and most impressive leaf has been damaged during shipping. It is a shame to have to prune it off, but if you do not it will drag the remainder of the plant down with it! MOST IMPORTANT: Plant only the roots of the plant. This is where most people run into trouble. The portion of the plant where the roots and stems meet is called the crown. If you plant (bury) the crown, you will restrict the flow of water and oxygen to this area of the plant. Detritus will build up there and anaerobic bacteria will rot the plant at the base. You won&#39;t notice it at first because the leaves will still look green long after the base of the stem has turned soft and brown. If the plant doesn&#39;t have enough roots to hold it in place, try using a lead weight or gently wedging it between rocks or driftwood. I hope this gives you some idea of the variety of sword plants that are available and how to care for them. If anyone has any questions don&#39;t be afraid to ask me at one of the meetings or give me a call. I can be reached at (718)846-6984 most evenings or Email me at Serpae @ AOL.COM.

» For all items, regardless of the minimum bid marked on its card, the bids must be in increments of .25 or more. » Once entered, a bid may not be lowered by the same bidder. » Any cross-out by a bidder will disqualify that bidder for posting the winning bid unless that bidder enters a subsequent higher bid. » Winning bidders must submit cards and payments to the treasurer. » The amount representing the minimum bid marked on the card will be refunded to the donor; the amount bid over the minimum represents the donation to the Society. » Items not claimed by winning bids or their owners at the conclusion of the auction become the property of the Society.

AERICANCICHUDSFROM LAKE MALAWI &amp; TANGANYIKA. HUGE SELECTION ALL THOSE HARD TO FIND FISH NEWSH^ME^^S,VVEEKLXFROMARO^JNDTHEWORLD THE STORE WHERE YOU SERVE YOURSELF AND SAVE!

Visit &quot;LUCILLE&quot;, Our Pond&amp; Falls In Our Backyard! You Can Build A Pond Too.

Grand Central Parkway to Exit 24 (Little Neck Parkway) Turn right at exit â&amp;#x20AC;˘ follow the signs to the Farm Museum (Farm Museum is about 3 blocks from Parkway exit, on the right)

Those who are interested in catfishes and the study thereof, but who were not previously connected with FACE; and

Those who had previously joined the organization, but have had little or no contact from it. If such &quot;members&quot; will forward a copy of their cancelled check, or a copy of their membership card to the address below, they will be automatically tenured into the reformed organization.

Catfishes are one of the most interesting and important groups of aquarium fishes, and it is time for an organization to seriously address this area. For information, and/or to be added to the mailing list please contact: Lee Finley 150 North Road Pascoag, RI 02859 Phone 401-568-0371; FAX 401-568-1561

WANTED: We are actively looking for articles on Discus and Anabantoids for upcoming future issues. We&#39;re also looking for artwork and articles by &quot;junior&quot; members.

Fin Fun According to Webster If Noah Webster had taken up fishkeeping, this is how he would have described some commonly used terms. See if you can identify them. Remember, however, this IS our April puzzle! 1) A member of a large group of non-vascular plants, almost all possessing chlorophyll, as well as one or more other pigments that mask the chlorophyll, producing red, brown, yellow, etc. organisms. 2) Symbol signifying the negative logarithm of a hydrogen ion concentration of a solution or pure liquid expressed in gram equivalents per liter. One of the paired membranous limbs or unpaired dermal outgrowths used by a fish 3). to propel and steer itself. A device for separating solids from liquids or suspended particles from gases, consisting of a porous substance through which only the liquid or gas can pass. 5)

A loose mixture of small pebbles and rock fragments.

An invisible fish which burrows itself into submerged flower pots and makes little 6) scratching noises. 7) A tube bent so that it has two roughly vertical and parallel legs of unequal length, used to transfer a liquid from a vessel placed at a higher level to a vessel at a lower level. 8) Any of over 1200 varieties of fish of the suborder Siluroidra, order Ostariophysi, having barbels and a scaleless or bony-plated body. 9)

A spare time interest or occupation, especially one taken up just for pleasure.