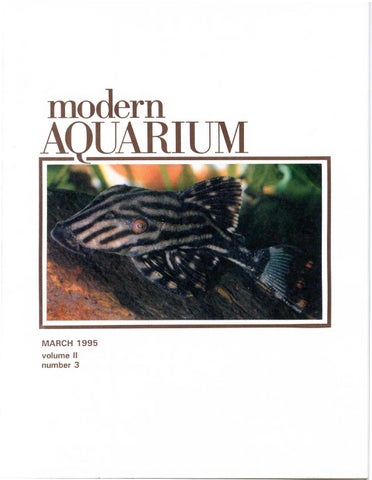 What I Learned From The Aquarium Hobby

What Do YOU Think

Articles submitted for consideration in MODERN AQUARIUM must be received no later than the 10th day of the month, three months prior to the month of publication. Copyright 1995 by the Greater City Aquarium Society. All rights reserved. Reproduction in any form of the articles, illustrations or photographs appearing in this magazine is prohibited without express written prior permission. Unless other rights have been retained by the author, and noted in the article or photograph, the Greater City Aquarium Society generally grants noncommercial reproduction rights to other recognized aquarium societies and naturalist organizations upon request. The Greater City Aquarium Society meets every month, except during July and August. Meetings are the first Wednesday of the month and begin at 8:30 P.M. Meetings are held at the Queens Botanical Gardens. For more information, contact Warren Feuer at (718) 793-8724.

largest of its day, and held its meetings in Union City. One of Rosario&#39;s friends from the club was Bill Vonderwinkler, who, at that time, in the late 1950s and early 1960s, was an editor for Tropical Fish Hobbyist magazine, which was then still in its infancy. Bill introduced Rosario to Herbert Axelrod, the founder and publisher of TFH. As we all know, Dr. Axelrod went on to become world famous as a collector, writer, photographer, and publisher. However, in the earlier years, Rosario would often bring unusual or new fish to Axelrod for photographic preservation. Rosario would also set about to breed the fish. Rosario was fortunate to have a friend, Ross Socolof, who owned a wholesale tropical fish business in New Jersey named General Aquatics. Socolof is also a very well known aquarist and hobby builder. Socolof often supplied Rosario with new and rare fish for Rosario to breed. Rosario&#39;s successes at breeding cemented his growing reputation in the hobby. In 1958, Rosario got his own chance to collect exotic tropicals when Herbert Axelrod asked Rosario to accompany him on a trip to South America. Rosario remembers this as a significant event in his aquaristic career. He still thinks fondly of that first trip to the tropics, and with gratitude to Dr. Axelrod for the opportunities it extended. While there, contact was established with the late Harald Schultz, a famed collector and exporter of Amazonian fish. Schultz had come to Rosario&#39;s attention by way of another well-known hobbyist of the day, Allan Fletcher, who was managing editor for the old Aquarium magazine (the one founded by William T. Innes). Some wonderful fish returned with Rosario and Dr. Axelrod. Included among them was Cynolebias whitei. which is now widespread in killifish circles, and the beautiful Black Phantom Tetra, which is now an aquarium standard. The first trip greatly whetted Rosario&#39;s appetite for more exploration. However, the second trip did not take place until 1977. In that year, Rosario accompanied Dr. Stanley Weitzman of the Smithsonian Institution on a National Geographic sponsored expedition to Brazil. From 1977 to 1988, Rosario went on a total of 5 trips to South America. During that time, he and his travel companions collected many new and beautiful fish for the hobby. Among these were exotic cichlids such as Biotecus opercularis, colorful tetras such as Inpaichthys kerri and Hyphesobrycon amandi, and numerous killifish. So prodigious and novel were Rosario&#39;s discoveries, that two fish were actually named after him. One is LaCorte&#39;s

Emperor tetra, Nematobrycon lacortei, and LaCorte&#39;s killifish, Cynolebias lacortei. The latter fish was used as the emblem for the 1991 American Killifish Association&#39;s annual Convention (the emblem itself was drawn by Rosario, who is also an artist and photographer). In the May 1969 issue of Modern Aquarium, which was then (and is once again) the widely read magazine of the Greater City Aquarium Society (New York), its editor, Dan Carson, wrote a piece about Rosario (who was also featured on that issue&#39;s cover). Dan and others had visited Rosario at his Elizabeth home and had noted that, in his fish tanks, Rosario had &quot;the widest variety of spawns that any of us had ever seen in a hobbyist&#39;s hatchery.&quot; Rosario is certainly one of the world&#39;s leading authorities on breeding fish. He has written numerous articles and books over the years, and has contributed greatly to our understanding of fish and their habits. Yet, if you ask Rosario what his greatest contribution to the hobby has been, he will not mention a specific fish, or breeding technique, or book. To Rosario, the most important aspect of his participation in the hobby has been the integrity accompanying each endeavor. Rosario has never sought to benefit himself at the expense of others. He has never made claims he could not support. In an age when fish breeders kept &quot;secrets&quot; from each others, Rosario openly shared his insights. Rosario&#39;s &quot;secrets&quot; have been simply those that result from hard work spending time to observe the fish, having the intelligence to learn from what he observed, persevering in his efforts instead of allowing discouragement to take over. No luck is involved here â&amp;#x20AC;&amp;#x201D; mostly perspiration and a little bit of inspiration, to paraphrase Thomas Edison. Rosario&#39;s endeavors did benefit from the loving support of his wife Jean and their family. Their home has been visited by many aquarists, from all over the world â&amp;#x20AC;&amp;#x201D; they keep a guest book as a souvenir of these visits. Rosario and Jean are always gracious hosts, and are not to be outdone in good old-fashioned courtesy. Rosario continues to be active in local aquarium societies and in the breeding of fish. He is a frequent lecturer and show judge. A visit to his fish room is a learning experience for everyone. If they ever erect an American aquarium hall of fame, I am certain that Rosario LaCorte would be elected to its gallery.

mounted on an axle and comes with a handle. This unit can be rolled over the worms on a pine board and, going in different directions, you will see that you can reduce the worms to quite small pieces that can be fed to your growing fry. Remember to place the worms in a brine shrimp net to rinse the blood from them. The idea is to give your growing fry as much variety as possible to accelerate growth and build a good strong fish. You cannot hope to raise fry on a constant diet of newly hatched brine shrimp. Much nutritional richness is lost in the hatching process itself. If Artemia could feed on green water for a few days, an increase in nutritional values would certainly result. In order to get full production from killies it is beneficial to feed different types of worms for solid egg production. Tubifex is readily available and I realize these worms have always been controversial because of the polluted environment they live in. Care should be used prior to their feeding. Several washings a day will reach that point. If you are one of those

aquarists who only feeds this food you will produce large fish with poor color and finnage; at least that&#39;s been my observation. Artemia fed wisely can enhance coloration in fish and it is one of the advantages of feeding at the fry stage. It can fix color at this stage of development. Daphnia is also an excellent food and in particular Daphnia collected during the summer months is especially rich in nutrients due to their feeding primarily on algae which are a rich source of carotene. During the summer months because of the abundance of Daphnia to feed, our best growth occurred then and, as an added bonus, it also produced intense coloration in the fish. In one particular pond I was able to collect huge amounts of rotifers which were part of the plankton bloom. These were strained from the Daphnia and it was my experience to observe that there was no food that accelerated growth in fry as did the plankton. Even the rotifers were rich in color much like that of Artemia.

Editor&#39;s Note: Next month, the conclusion of this informative article on feeding and, hopefully, a look inside Rosario&#39;s fish room.

G.C.A.S. HAPPENINGS UPCOMING EVENTS/SPEAKERS: March: Lee Finley (noted catfish and aquatic book expert) April: Silent Auction (Remember: no bowl show this meeting) May: Terry Siegal (speakjng pn &quot;Your First Marine Aquarium&quot;) June: Dr. Paul Loisefle (nationally tenpwned author and cichlid expert) The April &quot;Silent Auction* is a way to help Greater City and to dispose of equipment that, while still working; ;!ybu no longer peed or use. Thaiajtr: pui$ip|;;br old stainless steel tank, or filter for a tank you ho longer have cafe be donated to GC-AS, ori^old (With thejpinimum bid&quot; you specify going to you and any balance going to GCAS). Pick up auction forms at this month&#39;s meeting!

Fin Fun A Stripe By Any Other Name There are many fish that are &quot;striped,&quot; &quot;banded,&quot; or &quot;barred&quot; and your job is to match the common name of these fish with their scientific names. Banded Loach Dark-Banded Piranha One Striped African Characin Striped Dwarf Cichlid 3 Lined Pencilfish Banded Knifefish Half-Striped Barb