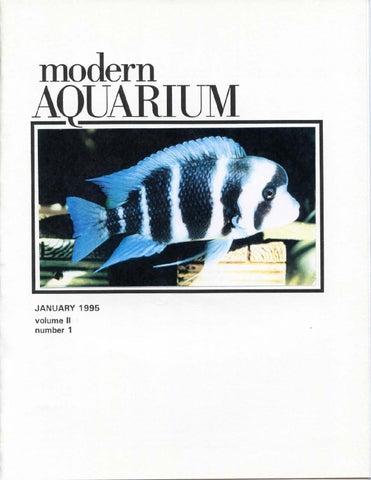 AQUARIUM ON THE COVER

The Rontosa cyphotilapia, on this month&#39;s cover might enjoy sharing some of your food. For some interesting culinary ideas on this subject, read &quot;Table Food For Tropicals&quot; in this issue. Photo by Joe Lozito

The Mark of Quality

Anicles submitted for consideration in MODERN AQUARIUM must be received no later than the 10th day of the month, three months prior to the month of publication. Copyright 1994 by the Greater City Aquarium Society. All rights reserved. Reproduction in any form of the articles, illustrations or photographs appearing in this magazine is prohibited without express written prior permission. Unless other rights have been retained by the author, and noted in the article or photograph, the Greater City Aquarium Society generally grants noncommercial reproduction rights to other recognized aquarium societies and naturalist organizations upon request. The Greater City Aquarium Society meets every month, except during July and August. Meetings are the first Wednesday of the month and begin at 8:30 P.M. Meetings are held at the Queens Botanical Gardens. For more information, contact Warren Feuer at (718)793-8724.

The Editor&#39;s Apprentice ALEXANDER A. PRIEST

f you&#39;re looking for the &quot;fish in a cup&quot; that sits on the Editor&#39;s Desk, you won&#39;t find it. That&#39;s because our Modern Aquarium Editor, Warren Feuer, is recovering from eye surgery and has entrusted this issue to me. This issue of Modern Aquarium marks the start of its second year following its revival as &quot;Series III.&quot; A year ago, Joe Ferdenzi wrote a history of Modern Aquarium as a publication of Greater City. Under Joe&#39;s overall direction, Warren&#39;s guidance, and the practiced eye of our Art Director, Stephan Zander, the publication you now hold has evolved into a professional quality magazine that brings credit to GCAS. Warren has written an article, often more than one, in every issue this past year. Yet, he modestly avoided any description of the fears, problems, mistakes and doubts that the Editorial Staff encountered in our inaugural year. I will relate them from my perspective. Hopefully, this will not become what I call an &quot;Aye, Aye, Aye&quot; article (with every other sentence beginning with the word &quot;I&quot; and with the emphasis on Me, My and What I Did (and how hard it was to do). Rather, I want this to serve as both a testimony to the behind the scenes work of several dedicated people, and as a mini lesson to other aquarium societies on what not to do when upgrading your newsletter. It was sex that brought me to GCAS and love that made me stay. Let me explain. I was (and still am) a member of the Brooklyn Aquarium Society. However, certain personal commitments made the fairly lengthy (for me) trip to BAS meetings difficult. At one BAS meeting I was able to attend, a speaker named Joe Ferdenzi talked about &quot;Fish Sex.&quot; The talk was excellent — both informative and amusing. More important, I learned Joe was president of an aquarium society that met much closer to my home — close enough for me to be able to attend most meetings! My wife, Susan, and I came to a meeting. We loved every minute. We joined. Shortly thereafter, Joe mentioned that the newsletter of GCAS, Network, was to be replaced and does anyone have computer skills and equipment who might be able to help? Well, directly opposite our 90 gallon community tank sit three computer systems and a laser printer my hobby for over 10 years. I looked at Susan; she nodded to show she had no objection. So, I told Joe I might be able to help. I thought Joe

just wanted to spruce up Network. I did not know then just how lofty his goals were. I was soon to learn. The first &quot;Editorial Board&quot; meeting I went to was in Joe&#39;s house. I discovered Warren was a computer programmer and that Stephan had magazine publishing experience. When Stephan used terms such as &quot;dropcap&quot; &quot;leading&quot; &quot;fonts&quot; &quot;points&quot; and &quot;justification,&quot; Joe and Warren got the same look that I get when they use Latin names of fish — bewilderment. As Editor of a computer user group newsletter, I knew those publishing terms, but I never guessed this project would have such high standards and attention to detail. It took weeks of test files before Stephan decided on the style and size of the print and on the width and placement of columns that you see here. The thickness (or &quot;weight&quot;) and size of the paper was debated, and how it would be stapled. Stephan had very definite ideas about what he wanted. Joe also had some definite ideas, one of which was his view that the aquarium hobby gives &quot;visual&quot; pleasure and our publication should be illustrated, preferably with some color photographs. The cost of color printing is very high. Stephan had a solution (though it meant a lot of work for him). He would have several prints made of a color photograph, put them together on one page and have a color photocopy made (since the cost to copy a page is the same if it had one picture or several). He would then hand cut and paste the photos into each issue! We planned 10 issues a year (one for each month GCAS meets). After the first issue, New York City&#39;s worst winter in years struck. I was snowbound and Stephan hurt his back. We could not meet to put together the February issue. One month after starting, we blew our first deadline. We decided to put out a &quot;double&quot; issue and call it February/March, 1994. The one month delay was a blessing in disguise. For the first issue, Stephan transferred each letter in the title Modern Aquarium by hand. He wanted a &quot;Bodoni&quot; font that neither Warren nor I could match with our computers. After the first issue was printed I received a product to review for a computer publication. That product was of professional quality fonts, one of which was a Bodoni font that exactly matched the look Stephan wanted. We could now do in minutes what took Stephan hours!

&quot;All That Sparkles&quot; [Fish With Common Names Of Things That Sparkle] &quot;Groaners&quot; [Nonsense Rhymes With A Fish Theme]

Correspondence to Modern Aquarium should be mailed to: Warren Feuer ,,:|| 68-61 Yellowstone Boulevard j|||||

Purchases of $25 or More , With coupon only. Not to be combined with any other offer Expires 1/31/95

Cannot be combined with coupons

Begin by placing your trio of fish in a tank by themselves. Once the females have been fertilized (a dark area on the abdomen of the females will be visible), place then into your fry raising tank, preferably into a breeder trap. This way, when the female gives birth, the babies will drop through the slots and be protected from their mother&#39;s hungry mouth. As a side benefit, you won&#39;t have to spend all your time watching for the fry to be born. Any or all of the above mentioned foods can be used to raise the fry. Once you are able to sex the fry, the males and females must be separated. After approximately five months, the female babies with the most desirable traits should be selected. From these select few, find the best female and mate her with her father.

The fry of this father x daughter mating should be used to select the most desirable offspring and create several &quot;lines.&quot; A line is a cross of litter mates, father x daughter or combination thereof, that produces fry that perpetuate the traits you are seeking to develop&#39;. Our goal is to end up with two or more lines of guppies. Once this has been accomplished, you, the breeder, can even cross the lines to produce more offspring that should be superior to any of the previous lines. The next time you pass a tank of guppies in a pet store, if it occurs to you that you could produce better looking fish, go ahead and try. With my instructions, you should have a good start on achieving that goal.