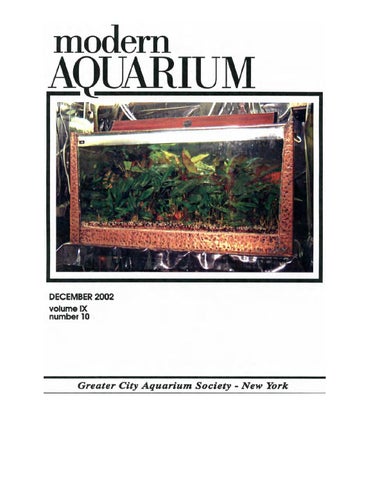 I would like to see more people involved in volunteer service to the club. All one needs is some measure of enthusiasm, and a sense of history; keeping alive the passion for a hobby that has been passed down for over eight decades! Sometimes I wonder what one of the original GCAS members from 1922 would think if he came to one of our meetings. Would he be surprised to see that we were still around? What differences would he find in the way meetings are conducted? Of course, I'll never know the answers because, unless the person was under the age often when he joined Greater City, it is very doubtful such an original member would be alive today. However, I am confident that such a member would be proud of GCAS today. Please allow me to express my thanks to all our members and their families for all the support they have shown for GCAS in the past year. And, as we enter this holiday season, please accept my best wishes for a joyous celebration, and for a happy new year to come.

s the calender year comes to a close, Greater City is in the middle of its "year" — one that begins every September and ends every June. So far, both "years" have been great. In May, we celebrated another GCAS milestone with our 80th Anniversary Show. Our treasury reached heights we haven't seen in decades. In September, we hosted hobby legend and Discus breeder extraordinaire, Jack Wattley. Each meeting after that has also featured dynamic speakers and vibrant turnouts. It is little surprising that I hear compliments about our club all the time. And, it wouldn't surprise me if we continue in this splendid achievement for quite some time — our core is strong and young.

It's in the Bag! A series by "The Under gravel Reporter"

NOT â&#x20AC;˘ â&#x20AC;˘ Hie essl|il|;:, ;;;opn)oni||^^ Greater 6^ agging fish is both an art and a science. It's a science to the extent that you need to select a bag size, and proper proportional mix of air-space to water for the size of fish, and the length of expected travel time. It's an art, because it seems that each person who has been involved in the hobby for a while (whether as an aquarist, or on the commercial end, selling livestock and aquatic plants to aquarists) seems to have his or own way of sealing the bag, thereby expressing that person's individuality to some extent. Without a doubt, the most annoying way of bagging ,in my estimation, is tying a knot at the top of the bag. First of all, it's nearly impossible to untie that knot. This means you have to take pair of scissors and cut the bag. This usually results in a bag that is hard to hold, and one that all too often results in spills and splashes. The most common way to secure the top of a plastic bag of aquatic plants or animals is by a rubber band. Here's where people get real creative. I've seen three and four inch rubber bands literally braided into the bag. These are very artistic, and as hard to remove as a tied bag. Even if you can get a scissor under part of the rubber band and manage to cut it, nothing happens. That one rubber band acts is if it were twenty separate rubber bands. Cutting one part does not release the rubber band's "hold" on the bag. Some people use these tiny rubber bands that seem to be more ideally suited for pinky finger decorations than for any other useful purpose. These tiny rubber bands are often secured very tightly (there is no other choice, since, because they are so small, they have to be stretched quite a bit before they are long enough to do anything with). As a result, the slightest attempt to remove

them results in them snapping and either shooting off into the air (usually landing in your container of worms, or show tank), or giving your fingers (and sometimes even your face) a sharp sting. I always remember to wear glasses when I have to open bags sealed with these tiny rubber bands. Not only is the nearly wire thin rubber band nearly impossible to see, but I've had too many of them snap in the direction of my eyes in the past. Most aquarists and aquarium stores practice double bagging (usually inverting one bag upside down into the other). This usually means that whatever challenges and obstacles you had to overcome in order to remove the first bag, you now face with the second bag, with the added challenge of knowing that if you cause that bag to break, its valuable live contents are at risk. I've watched those commercials for "zipper bags" in which a particularly unpleasant substance is dangled over the head of someone to prove that the bag holding it will not accidentally open. You would think that, by now, someone would invent an "aquarium-safe" zipper bag. (Using a regular sandwich zipper bag for fish usually results in disaster, which is why most aquarium club auctions will not accept fish bagged that way.) Or, maybe someone could come up with a bag clip that is truly watertight, will not fall off accidentally, is easy to remove, and is inexpensive enough that stores can use them on every live food, plant, and animal purchase. (It would also be nice if such a clip were reusable.) A recent development in the bagging of fish is the "breathable" bag. This bag is not intended to be partially filled with air. Rather, it is completely filled with water. The bag holds in the water, but allows carbon dioxide to escape, and oxygen to enter. I know several aquarists who use these bags, and I understand that they are popular for transporting fish collected in the wild. There are, however, some drawbacks. First, if you have a Styrofoam box full of these bags, and one or two break, for whatever reason, the bags are surrounded not by air, but by water. This means that oxygen and carbon dioxide are not able to freely pass though the bags, eventually suffocating the fish. Also, while these bags can be used with anabantoids, they should not be completely filled with water. Adult anabantoids need to be able to reach atmospheric air to survive. So, these bags, which cost much more than regular plastic bags, can only be used with anabantoids in the same way that regular "non-breathable" bags are used. Once upon a time, fish were "bagged" in opaque containers. (You got your fish in a box resembling that used for Chinese take-out orders.) I'd like to see that practice return.

Fin Fun We are sure you will enjoy these brain teasers, which were contributed by someone much smarter and more creative than our usual authors. Warning: don't start to read these unless you are willing to lose a few hours of sleep. Thanks to GCAS member Bernard Harrigan for this month's Fin Fun. Bring your answers to next month's Holiday Party and Awards Presentation for a chance at winning a prize! 1. What is the most aloof fish? 2. What do you find at the front of an Angelfish, but at the back of a Neon Tetra? 3. What is weightless, can be seen with a naked eye, and if put in a fish tank, will make it weigh less? 4. You have a one quart and a one pint plastic container filled with water. You also have a ten gallon aquarium that is three-quarters of the way filled with water. Is there a way to put all the water from the containers into the fish tank so that you can tell what water came from which container? 5. You have 30 Guppies in a tank. Divide all the Guppies by one half, and add nine more Guppies. How many Guppies do you have? 6. The Water Lillies in Joe's pond double in area every 24 hours. From when the first Water Lilly was introduced, until the pond is completely covered, takes 26 days. On what day is the pond half covered? 7. You are about to open your own aquarium shop next week. You have a manager and three workers. In the basement there are 39 ten gallon tanks, 19 twenty gallon tanks, 9 thirty gallon tanks, a 50 foot length of hose, three boxes of birthday candles, and a 2!/2 inch DeWalt Finish Nailer. The only faucet that will fit the hose is in the back of the store. The store is 80 feet long. The tank stands have been set up along the length of the store wall. What is the easiest way for you to get those fish tanks filled with water?