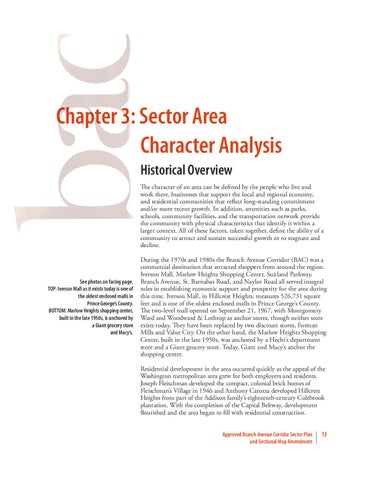 Chapter 3: Sector Area Character Analysis Historical Overview The character of an area can be defined by the people who live and work there, businesses that support the local and regional economy, and residential communities that reflect long-standing commitment and/or more recent growth. In addition, amenities such as parks, schools, community facilities, and the transportation network provide the community with physical characteristics that identify it within a larger context. All of these factors, taken together, define the ability of a community to attract and sustain successful growth or to stagnate and decline.

See photos on facing page. TOP: Iverson Mall as it exists today is one of the oldest enclosed malls in Prince George’s County. BOTTOM: Marlow Heights shopping center, built in the late 1950s, is anchored by a Giant grocery store and Macy’s.

During the 1970s and 1980s the Branch Avenue Corridor (BAC) was a commercial destination that attracted shoppers from around the region. Iverson Mall, Marlow Heights Shopping Center, Suitland Parkway, Branch Avenue, St. Barnabas Road, and Naylor Road all served integral roles in establishing economic support and prosperity for the area during this time. Iverson Mall, in Hillcrest Heights, measures 526,731 square feet and is one of the oldest enclosed malls in Prince George’s County. The two-level mall opened on September 21, 1967, with Montgomery Ward and Woodward & Lothrop as anchor stores, though neither store exists today. They have been replaced by two discount stores, Forman Mills and Value City. On the other hand, the Marlow Heights Shopping Center, built in the late 1950s, was anchored by a Hecht’s department store and a Giant grocery store. Today, Giant and Macy’s anchor the shopping center. Residential development in the area occurred quickly as the appeal of the Washington metropolitan area grew for both employers and residents. Joseph Fleischman developed the compact, colonial brick homes of Fleischman’s Village in 1946 and Anthony Carozza developed Hillcrest Heights from part of the Addison family’s eighteenth-century Colebrook plantation. With the completion of the Capital Beltway, development flourished and the area began to fill with residential construction. Approved Branch Avenue Corridor Sector Plan and Sectional Map Amendment