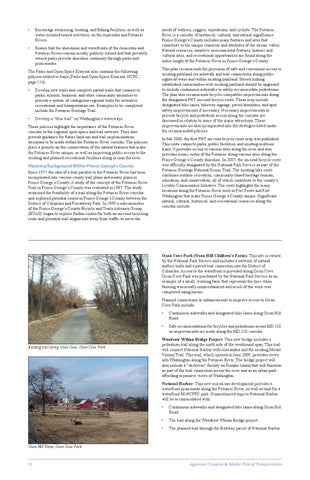 • Encourage swimming, boating, and fishing facilities, as well as water-oriented tourist activities, on the Anacostia and Potomac Rivers. • Ensure that the shorelines and waterfronts of the Anacostia and Potomac Rivers remain mostly publicly owned and that privately owned parks provide shoreline continuity through parks and promenades. The Parks and Open Space Element also contains the following policies related to trails (Parks and Open Space Element, NCPC, page 124): • Develop new trails and complete partial trails that connect to parks, schools, business, and other community amenities to provide a system of contiguous regional trails for extensive recreational and transportation use. Examples to be completed include the Potomac Heritage Trail. • Develop a “blue trail” on Washington’s waterways. These policies highlight the importance of the Potomac River corridor to the regional open space and trail network. They also provide guidance for future land use and trail implementation decisions to be made within the Potomac River corridor. The policies place a priority on the conservation of the natural features that make the Potomac River unique, as well as improving public access to the existing and planned recreational facilities along or near the river.

needs of walkers, joggers, equestrians, and cyclists. The Potomac River is a corridor of historical, cultural, and natural significance. Prince George’s County includes many features and sites that contribute to the unique character and attributes of the stream valley. Natural resources, sensitive environmental features, historic and cultural sites, and recreational opportunities are found along the entire length of the Potomac River in Prince George’s County. This plan recommends the provision of safe and convenient access to existing parkland via sidewalk and trail connections along public rights-of-ways and within existing parkland. Streets linking established communities with existing parkland should be upgraded to include continuous sidewalks to safely accommodate pedestrians. The plan also recommends bicycle-compatible improvements along the designated PHT on-road bicycle route. These may include designated bike lanes, bikeway signage, paved shoulders, and spot safety improvements if necessary. Necessary improvements to provide bicycle and pedestrian access along the corridor are discussed in relation to some of the major attractions. These improvements are also incorporated into the strategies listed under the recommended policies. In fall 2000, the first PHT on-road bicycle route map was published. This route connects parks, public facilities, and existing multiuse trails. It provides access to various sites along the river and also provides scenic vistas of the Potomac along various sites along the Prince George’s County shoreline. In 2005, the on-road bicycle route was officially designated by the National Park Service as part of the Potomac Heritage National Scenic Trail. The existing bike route combines outdoor recreation, community-based heritage tourism, education, and conservation, all of which contribute to the county’s Livable Communities Initiative. The route highlights the many locations along the Potomac River such as Fort Foote and Fort Washington that make Prince George’s County unique. Significant natural, cultural, historical, and recreational resources along the corridor include:

Oxon Cove Park (Oxon Hill Children’s Farm): This site is owned by the National Park Service and includes a network of natural surface trails and a paved trail connection into the District of Columbia. Access to the waterfront is provided along Oxon Cove. Oxon Cove Park was purchased by the National Park Service as an example of a small, working farm that represents the time when farming was mostly nonmechanized and much of the work was completed using horses. Planned connections or enhancements to improve access to Oxon Cove Park include: • Continuous sidewalks and designated bike lanes along Oxon Hill Road. • Safe accommodations for bicycles and pedestrians across MD 210 as improvements are made along the MD 210 corridor. Existing trail along Oxon Cove, Oxon Cove Park.

Woodrow Wilson Bridge Project: This new bridge includes a pedestrian trail along the north side of the westbound span. This trail will connect National Harbor with Alexandria and the existing Mount Vernon Trail. This trail, which opened in June 2009, provides views into Washington along the Potomac River. The bridge project will also include a “deckover” facility on Rosalie Island that will function as part of the trail connection across the river and as an urban park affording expansive views of Washington. National Harbor: This new mixed-use development provides a waterfront promenade along the Potomac River, as well as land for a waterfront M-NCPPC park. Nonmotorized trips to National Harbor will be accommodated with: • Continuous sidewalks and designated bike lanes along Oxon Hill Road. • The trail along the Woodrow Wilson Bridge project. • The planned trail through the Beltway parcel of National Harbor.