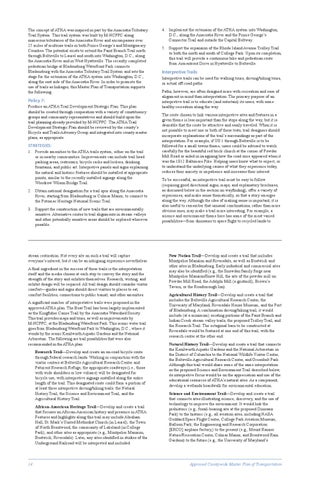 The concept of ATHA was inspired in part by the Anacostia Tributary Trail System. This trail system was built by M-NCPPC along numerous tributaries of the Anacostia River and encompasses over 25 miles of multiuse trails in both Prince George’s and Montgomery Counties. The potential exists to extend the Paint Branch Trail north through Beltsville to Laurel and south into Washington, D.C., along the Anacostia River and in West Hyattsville. The recently completed pedestrian bridge at Bladensburg Waterfront Park connects Bladensburg with the Anacostia Tributary Trail System and sets the stage for the extension of the ATHA system into Washington, D.C., along the east side of the Anacostia River. In order to promote the use of trails as linkages, this Master Plan of Transportation supports the following:

Policy 7: Produce an ATHA Trail Development Strategic Plan. This plan should be created through cooperation with a variety of constituency groups and community representatives and should build upon the trail planning already provided by M-NCPPC. The ATHA Trail Development Strategic Plan should be reviewed by the county’s Bicycle and Trails Advisory Group and integrated into county master plans, as appropriate. STRATEGIES: 1. Provide amenities to the ATHA trails system, either on the trail or in nearby communities. Improvements can include trail head parking areas, restrooms, bicycle racks and lockers, drinking fountains, and public art. Interpretive panels and signs explaining the natural and historic features should be installed at appropriate points, similar to the recently installed signage along the Woodrow Wilson Bridge Trail. 2. Obtain national designation for a trail spur along the Anacostia River, starting from Bladensburg or Colmar Manor, to connect to the Potomac Heritage National Scenic Trail. 3. Support the construction of new trails that are environmentally sensitive. Alternative routes to trail alignments in stream valleys and other potentially sensitive areas should be explored wherever possible.

4. Implement the extension of the ATHA system into Washington, D.C., along the Anacostia River and the Prince George’s Connector Trail and outside the Capital Beltway. 5. Support the expansion of the Rhode Island Avenue Trolley Trail to both the north and south of College Park. Upon its completion, this trail will provide a continuous bike and pedestrian route from Armentrout Drive in Hyattsville to Beltsville.

Interpretive Trails Interpretive trails can be used for walking tours, driving/biking tours, or actual off-road paths. Paths, however, are often designed more with recreation and ease of alignment in mind than interpretation. The primary purpose of an interpretive trail is to educate (and entertain) its users, with some healthy recreation along the way. The route chosen to link various interpretive sites and features in a given theme is less important than the stops along the way, but it is desirable that the route be attractive and easily traveled. When it is not possible to meet one or both of these tests, trail designers should incorporate explanations of the trail’s surroundings as part of the interpretation. For example, if US 1 through Beltsville is to be followed for a small towns theme, users could be advised to watch carefully for the beautiful red brick church at the corner of Powder Mill Road or aided in imagining how the road once appeared when it was the 1812 Baltimore Pike. Helping users know what to expect, or to understand the underlying causes of what they experience today, reduces their anxiety or impatience and increases their interest. To be successful, an interpretive trail must be easy to follow (requiring good directional signs, maps, and explanatory brochures, as discussed below in the section on wayfinding), offer a variety of experiences, and make sense thematically, so that a story emerges along the way. Although the idea of making sense is important, it is also useful to remember that unusual combinations, rather than more obvious ones, may make a trail more interesting. For example, a science and environment theme here has some of the most varied possibilities—from dinosaurs to space flight to recycled lands to

A final ingredient in the success of these trails is the interpretation itself and the media chosen at each stop to convey the story and the strength of the story and exhibits themselves. Research, writing, and exhibit design will be required. All trail design should consider visitor comfort—guides and signs should direct visitors to places to eat, comfort facilities, connections to public transit, and other amenities.

New Nation Trail—Develop and create a trail that includes Montpelier Mansion and Riversdale, as well as Bostwick and other sites in Bladensburg. Early industrial and commercial sites may also be identified (e.g., the Snowden family forge near Montpelier Mansion/Snow Hill, the site of the powder mill on Powder Mill Road, the Adelphi Mill (a gristmill), Brown’s Tavern, or the Rossborough Inn).

A significant number of interpretative trails were proposed in the approved ATHA plan. The Boat Trail has been largely implemented as the Kingfisher Canoe Trail by the Anacostia Watershed Society. This trail provides maps and tours, as well as improvements by M-NCPPC, at the Bladensburg Waterfront Park. This scenic water trail goes from Bladensburg Waterfront Park to Washington, D.C., where it wends by the scenic Kenilworth Aquatic Gardens and the National Arboretum. The following are trail possibilities that were also recommended in the ATHA plan:

Agricultural History Trail—Develop and create a trail that includes the Beltsville Agricultural Research Center, the University of Maryland, Riversdale House Museum, and the Port of Bladensburg. A combination driving/biking trail, it would include (at a minimum) existing portions of the Paint Branch and Indian Creek stream valley trails, the proposed Trolley Trail, and the Research Trail. The octagonal barn to be constructed at Riversdale would be featured at one end of this trail, with the research center at the other end.

Natural History Trail—Develop and create a trail that connects the Kenilworth Aquatic Gardens and the National Arboretum in the District of Columbia to the National Wildlife Visitor Center, the Beltsville Agricultural Research Center, and Greenbelt Park. Although this trail would share some of the same interpretation as the proposed Science and Environment Trail described below, its interpretive focus would be on the appreciation and use of the educational resources of ATHA’s natural sites. As a component, develop a wetlands boardwalk for environmental education.

Science and Environment Trail—Develop and create a trail that connects sites illustrating science, discovery, and the use of technology to improve the environment. It would link the prehistoric (e.g., fossil-bearing site at the proposed Dinosaur Park) to the historic (e.g., all aviation sites, including NASA Goddard Space Flight Center, College Park Aviation Museum, Balloon Park, the Engineering and Research Corporation [ERCO] airplane factory,) to the present (e.g., Mount Rainier Nature/Recreation Center, Colmar Manor, and Brentwood Rain Gardens) to the future (e.g., the University of Maryland’s

stream restoration. Not every site on such a trail will capture everyone’s interest, but it can be an intriguing experience nevertheless.

Research Trail—Develop and create an on-road bicycle route through federal research lands. Working in conjunction with the visitor centers at Beltsville Agricultural Research Center and Patuxent Research Refuge, the appropriate roadways (i.e., those with wide shoulders or low volume) will be designated for bicycle use, with interpretive signage installed along the entire length of the trail. This designated route could form a portion of at least three interpretive driving/biking trails: the Natural History Trail, the Science and Environment Trail, and the Agricultural History Trail. African-American Heritage Trail—Develop and create a trail that focuses on African-American history and presence in ATHA. Features and highlights along this trail may include Abraham Hall, St. Mark’s United Methodist Church (in Laurel), the Town of North Brentwood, the community of Lakeland (in College Park), and other sites as appropriate (e.g., Montpelier Mansion, Bostwick, Riversdale). Later, any sites identified in studies of the Underground Railroad will be interpreted and included.