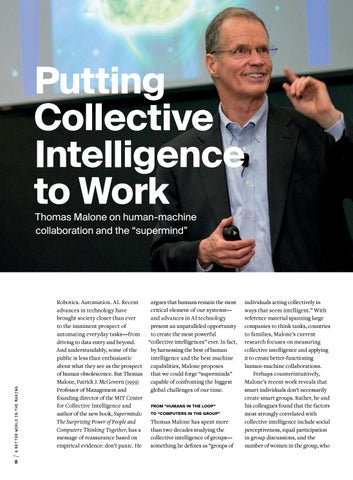 Thomas Malone on human-machine collaboration and the “supermind”

Robotics. Automation. AI. Recent advances in technology have brought society closer than ever to the imminent prospect of automating everyday tasks—from driving to data entry and beyond. And understandably, some of the public is less than enthusiastic about what they see as the prospect of human obsolescence. But Thomas Malone, Patrick J. McGovern (1959) Professor of Management and founding director of the MIT Center for Collective Intelligence and author of the new book, Superminds: The Surprising Power of People and Computers Thinking Together, has a message of reassurance based on empirical evidence: don’t panic. He

argues that humans remain the most critical element of our systems— and advances in AI technology present an unparalleled opportunity to create the most powerful “collective intelligences” ever. In fact, by harnessing the best of human intelligence and the best machine capabilities, Malone proposes that we could forge “superminds” capable of confronting the biggest global challenges of our time. FROM “HUMANS IN THE LOOP” TO “COMPUTERS IN THE GROUP”

individuals acting collectively in ways that seem intelligent.” With reference material spanning large companies to think tanks, countries to families, Malone’s current research focuses on measuring collective intelligence and applying it to create better-functioning human-machine collaborations. Perhaps counterintuitively, Malone’s recent work reveals that smart individuals don’t necessarily create smart groups. Rather, he and his colleagues found that the factors most strongly correlated with collective intelligence include social perceptiveness, equal participation in group discussions, and the number of women in the group, who