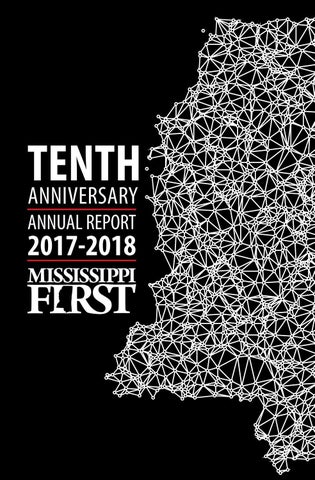 OUR STORY. Rachel Canter and Sanford Johnson met riding the school bus in elementary school over 25 years ago. They formed a friendship that would last beyond their years as public school students in Starkville, Mississippi. After graduating high school, their paths continued to cross. They both became teachers in the Mississippi Delta, and both later went to school to study public policy—Rachel at the Harvard

Kennedy School and Sanford at the Clinton School of Public Service. While they share many experiences, their strongest commonality is that they have a deep desire to improve education in their home state. This desire led Rachel and Sanford to launch Mississippi First 10 years ago as a nonpartisan, nonprofit organization dedicated to excellence in education.

OUR LEADERSHIP. Welcome to our 10th Anniversary Annual Report! Mississippi First launched as a nonprofit on October 15, 2008, with a lot of dreams, a little funding, and a passionate urgency to make education better in Mississippi. What was once just an idea is now a high-performing organization that is changing the lives of students in Mississippi daily. In the past decade, we have passed two pieces of watershed legislation (Mississippi Public Charter Schools Act and the Early Learning Collaborative Act of 2013), become an important implementation partner to education policymakers, published multiple reports, and developed the groundwork for a teen health organization. This year’s annual report celebrates our milestones over the last decade. We wouldn’t be here without the support of so many. We have tried to capture the names of our recent supporters later in the report, but I want to send a special thank-you to our founding mentor Alan Khazei, our founding donor Josh

Bekenstein, Christine Letts and Chris Stone (both of the Harvard Kennedy School), our first Board member Coleman Carlisle, our founding Board, our founding Board Chair Kitty Ramsey, our longest-serving Board Chair Maggie Middleton, all former Board members, our current Board (Matty Bengloff, Brett Harris, Catoria Martin, LaKesha Perry, and Adam Smith), some of our earliest foundation champions Jon-Paul Bianchi and Sherman Whites, wisewomen Marcie Skelton and Lee Ann Mayo, MDE friends Lynn House and Kim Benton, thought partners Bonita Coleman and Krystal Cormack, and my former interns Angela Bass (so glad you’re still with us!), Cortez Moss, Victoria Romano Haberman, Charles Woods, Erika Berry, Benjamin Lynch, Tim Abrams, and Camille Nelson. We would not be the organization we are without you, and I thank you from the bottom of my heart. I am also proud to formally introduce you to Teen Health Mississippi! When we founded Mississippi First, we never thought our project promoting sex education in

RACHEL CANTER Executive Director public schools would grow to encompass five staff members and multiple projects in teen health. Our teen health work has now expanded beyond our mission. At the start of 2019, they will officially be an independent nonprofit. We wish them the best of luck and hope you will continue to follow their work as they too will continue to make Mississippi First in the years to come.

MacKenzie is responsible for promoting, enhancing, and protecting our brand as well as a broad range of public relations and operation activities relative to the strategic direction and positioning of the organization and its advocacy agenda.

OUR BOARD. Matt Bengloff, Board Chair Cleveland, MS

HOW WE WORK. Our work is organized into 4 different categories: research and publications, issue education, advocacy, and policy implementation.

We inform stakeholders, policymakers, and the general public how policy solutions can impact children in Mississippi public schools.

Once policy is adopted, we ensure new policies are implemented correctly.

We research and recommend policy solutions for Mississippi’s challenges in education. Our reports provide in-depth analysis of problems and solutions.

We influence education decisionmakers to do what is best for kids in Mississippi based on the findings of our research.

2009 From 2009-2010, we published several papers on how charter school policy could impact education reform in Mississippi.

After passing the law, we turned our focus to implementation and provided technical assistance to the Mississippi Charter School Authorizer Board.

From 2015-2018, we developed materials to educate the public about charter schools and published them to our website.

OUR WORK IN CHARTER SCHOOLS. At Mississippi First, we believe that high-quality public charter schools should be a part of our state’s public education reform strategy. We will continue to support policies and practices that strengthen the charter sector as well as all public schools.

Our work during the last year was dedicated to: • Providing technical assistance to the Mississippi Charter School Authorizer Board, which included developing a statewide communications strategy, recommending a closure protocol, and proposing changes to their annual report. • Helping the first charter school in the Delta open their doors in July 2018. • Providing applicant support during the 2017 and 2018 application cycle. • Continuing to closely monitor the charter school funding lawsuit, which received a positive ruling by the Hinds Chancery Court, and is now pending before the Mississippi State Supreme Court. • Helping establish the Mississippi Education Accelerator, a nonprofit dedicated to providing applicant support in the charter sector.

OUR WORK IN EARLY EDUCATION.

Early education (pre-K) was a founding policy area for Mississippi First. We have worked to provide state-funded pre-K for over 10 years. In 2012, we published two major reports. The Title I Preliminary Report, which highlighted districts using Title I dollars to provide pre-K services, and Leaving Last in Line. These reports served as the foundation for the Early Learning Collaborative Act of 2013.

In 2018, MSF released Understanding District and State Testing in Mississippi. This report uses field research on testing practices in four diverse Mississippi school districts to determine how many tests Mississippi students take and how much time they spend taking those tests. This was our most publicized report ever. It led to the creation of the Mississippi Department of Education&#39;s Testing Taskforce.

OUR WORK IN TESTING &amp; ACCOUNTABILITY. Our testing research addressed four questions: How much time do students in each grade in each district spend on district, state, and other significant standardized testing?

What factors, if any, increase the amount of time students are exposed to standardized testing?

What does the data suggest schools should or should not do to maximize the value of standardized testing?

What are teachers’ perceptions of standardized testing?

It also describes common school district testing practices, such as how testing is conducted and how tests are used in the districts. Mississippi First wrote this report to bring much-needed research and analysis to a debate mostly characterized by impassioned anecdotes. The report offers several eye-opening general and comparative findings. Report highlights include the following: • In 2014-2015, students spent an average of 7 hours, 53 minutes—less than 1% of a 180-day school year—taking state tests. • Students took more district tests than state tests in every district we studied, but they sometimes spent less time on district testing than on state testing. • Test completion hours do not reflect all the time schools devote to standardized testing. • Low-performing districts in our sample administered more tests and spent more time testing than high-performing districts. • Low-performing districts prioritized test prep over content instruction for at least 25% of their instructional year.

Read the full report online at

OUR PAST. During the past 10 years, the majority of our work has been focused on early education, charter schools, and testing and accountability. Mississippi First sometimes works on pressing issues in education outside of our issue areas. Two of these issues were: state standards and school improvement grants.

OUR WORK IN STANDARDS.

OUR WORK IN SCHOOL IMPROVEMENT GRANTS.

In 2010, the Mississippi State Board of Education adopted the Common Core State Standards as Mississippi’s new academic standards in mathematics and English Language Arts. Since then, Mississippi First has championed Mississippi&#39;s rigorous standards known as the Mississippi College and Career Ready Standards. Some of our work in this area included leading letterwriting campaigns, conducting advocacy trainings for teachers, and providing issue education to legislators.

From 2010-2012, Mississippi First was proud to collaborate with the Office of School Recovery (OSR), the office within the Mississippi Department of Education (MDE) tasked with oversight of the 1003g School Improvement Grant (SIG), a federal grant program for schools with an unprecedented level of funding and accountability.

Between 2010-2016, our work around academic standards was focused on keeping the Mississippi College and Career Ready Standards in place. The standards describe what our students need to know and be able to do in order to be successful in our economy.

9 OUR FUTURE. Over the next three years, we will continue to work on early education, charter schools, and standards &amp; testing policy and implementation. We will also deep dive into researching teacher quality in Mississippi, a new initiative for us. EARLY EDUCATION By FY21, at least 35% of children will be in full-time, no-cost, high-quality pre-K seats. In 2019, we will continue to build high-quality pre-K options through research, issue education, advocacy, and implementation work.

CHARTER SCHOOLS By FY21, Mississippi will have 15 approved schools in at least three lowperforming areas, with capacity to serve 17,250. No charter schools will be below a “C” after 3 years. In 2019, we will focus on improving authorizing through strong policymaking and on strengthening the charter sector.

STANDARDS &amp; TESTING By FY21, influence state policymakers to adopt at least two recommendations from our recent testing report. In 2019, we will seek to influence state and district policies based on our findings.

NEW INITIATIVE. ADVANCING TEACHER QUALITY By FY21, Mississippi will increase the percentage of lowincome students served by a highly effective teacher. In 2019, we will launch a new three-year initiative to study the educator pipeline in Mississippi and propose policy solutions that will increase equitable access to quality teachers. The first year of the initiative will be focused on gathering the research necessary to understand the pipeline problem.

Over the last 10 years, Mississippi First has had plenty to celebrate. We have made demonstrable progress in each of our program areas, and we look forward to what we can accomplish in the next 10 years.

14,793 Followers on Facebook and Twitter There are 14 state-funded early learning collaboratives in Mississippi. By the end of 2018, the Mississippi Department of Education hopes to increase this number to at least 18.

Mississippi First has been recognized twice nationally for our work: first by the Game Changer of the Year Award in 2013 by the Policy Innovators in Education Network and by the Peter Jennings Award for Civic Leadership in 2014.

Mississippi First has published two State of Pre-K reports and we will publish the 3rd generation in 2019.

$6.5M Since 2013, the Mississippi State Legislature has increased funding for the state-funded pre-K program to $6.5M. Mississippi First was a lead advocate for this funding.

Learn more about our work online at

EIGHT There are currently five charter schools and three more on deck to open in the next two years.

4 In 2014, Mississippi First grew to include four education policy team members. Since the addition of those four members, Mississippi First has published four major research reports which have directly impacted pre-K, charter schools, and testing.

You can donate today at mississippifirst.org, mail your gift to 125 S. Congress Street, Suite 1510, Jackson, MS 39201, or call our Executive Director at 601.398.9008 for more information on how you can make a difference at Mississippi First.

To stay-up-to-date on our initiatives, follow us on social media or online at mississippifirst.org. 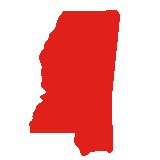