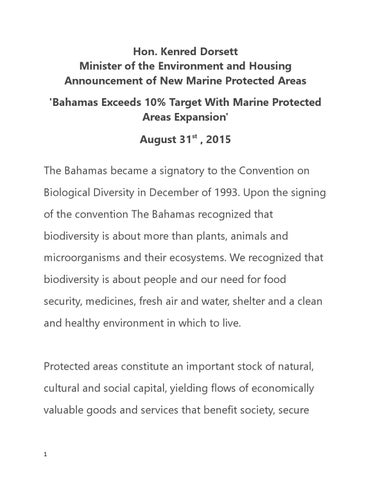 Hon. Kenred Dorsett Minister of the Environment and Housing Announcement of New Marine Protected Areas 'Bahamas Exceeds 10% Target With Marine Protected Areas Expansion' August 31st , 2015 The Bahamas became a signatory to the Convention on Biological Diversity in December of 1993. Upon the signing of the convention The Bahamas recognized that biodiversity is about more than plants, animals and microorganisms and their ecosystems. We recognized that biodiversity is about people and our need for food security, medicines, fresh air and water, shelter and a clean and healthy environment in which to live.

livelihoods, and contribute to the achievement of the Millennium Development Goals. Moreover, protected areas are key to buffering unpredictable impacts of impending climate change. As a low-lying archipelagic ocean-nation, The Bahamas is mindful of the effect that sea level rise and climate change will impact our way of life and survival if immediate and significant global action is not taken.

The Bahamas is doing its part and has continued to be a leader in the arena of protected area designation. Beginning in 1958 with the creation of the first land and sea park in the world â&#x20AC;&#x201C; the Exuma Cays Land and Sea Park, the doubling of the protected area system in 2002 as well as the identification by the Department of Marine Resources of 39 areas for a marine reserve network, our country has continued to recognize the value of protecting natural resources for the benefit of Bahamians today and in the future. 2

The Bahamas in 2008 announced its acceptance of the Caribbean Challenge Initiative (CCI) and reaffirmed the countryâ&#x20AC;&#x2122;s commitment to protect 20% of its near shore and marine environment. The Bahamas is part of a group of 10 Caribbean nations that have joined the CCI committing to protecting at least 20% of their marine environments by 2020. Today, as the current Co-Chair of the CCI Council and Minister responsible for the Environment, I am here to announce with great pride and a sense of accomplishment that we are progressing steadily towards this target.

In recent years, the government of The Bahamas, through my Ministry, the Bahamas Environment Science & Technology Commission and a dedicated team of conservation professionals from the Bahamas National Trust, The Nature Conservancy, and the Bahamas Department of Marine Resources, supported by funding 3

from the United Nations Environment Programme (UNEP) and the Global Environmental Facility (GEF) have been implementing a full sized project that includes as its final goal, the expansion of the marine protected area system of The Bahamas. The project sets as its target the protection of 2.5 million hectares. These new areas have undergone scientific assessment and extensive community outreach.

As well as the creation of these new protected areas, the government of The Bahamas realizing the cost of managing protected areas increased its subvention to the 6

Bahamas National Trust in the 2015 budget. Additionally as part of the Global Environmental Facility Full – Sized Project “Building a sustainable network of marine protected areas for The Bahamas “ a mechanism for sustainable financing, the Bahamas Protected Area Fund, has been legislated and implemented. I am advised that The Bahamas is the first country to enact legislation establishing a legal trust fund dedicated specifically to financing protected areas management.

In our Charter for Governance, the current administration committed to safeguarding and protecting our nation for future generations, including the preservation of our environment. Today, we have set the foundation for the protection of approximately of 7.5 million acres (3 million hectares) of land, nearshore and marine environment. This includes the new San Salvador National Parks announced in April of this year and in total exceeds the target of 2.5 7

To allay any concern regarding land rights associated with the Marine Protected Areas network, it should be noted that all private land will be excluded from the boundaries of the protected areas and the rights of landowners will not been infringed upon. With respect to public land, they will remain under the control of the Minister responsible for Lands.

The Ministry will now work with and consult our partners, stakeholders and local communities to develop the management plans associated with these declared areas. 8

Some areas may be "managed conservation areas" and others may be "no take zones". There is much work to be done in this regard and simultaneously we will set in motion, efforts to achieve our 20% commitment. All of these efforts are a part of our goal of developing the green and blue economies of The Bahamas.

We will spare no effort to ensure that we achieve this lofty but attainable goal for the benefit of both current, but especially future generations of Bahamians. 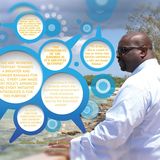