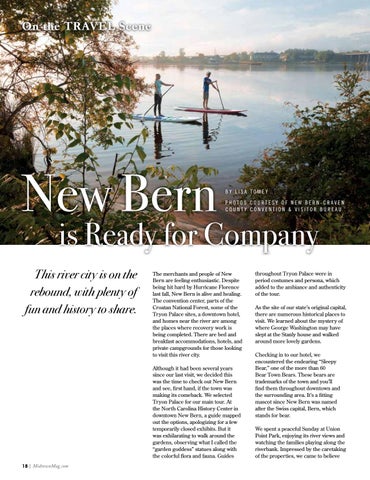 On the theTRAVEL TRAVEL Scene On Scene

is Ready for Company

This river city is on the rebound, with plenty of fun and history to share.

The merchants and people of New Bern are feeling enthusiastic. Despite being hit hard by Hurricane Florence last fall, New Bern is alive and healing. The convention center, parts of the Croatan National Forest, some of the Tryon Palace sites, a downtown hotel, and homes near the river are among the places where recovery work is being completed. There are bed and breakfast accommodations, hotels, and private campgrounds for those looking to visit this river city. Although it had been several years since our last visit, we decided this was the time to check out New Bern and see, first hand, if the town was making its comeback. We selected Tryon Palace for our main tour. At the North Carolina History Center in downtown New Bern, a guide mapped out the options, apologizing for a few temporarily closed exhibits. But it was exhilarating to walk around the gardens, observing what I called the “garden goddess” statues along with the colorful flora and fauna. Guides

throughout Tryon Palace were in period costumes and persona, which added to the ambiance and authenticity of the tour. As the site of our state’s original capital, there are numerous historical places to visit. We learned about the mystery of where George Washington may have slept at the Stanly house and walked around more lovely gardens. Checking in to our hotel, we encountered the endearing “Sleepy Bear,” one of the more than 60 Bear Town Bears. These bears are trademarks of the town and you’ll find them throughout downtown and the surrounding area. It’s a fitting mascot since New Bern was named after the Swiss capital, Bern, which stands for bear. We spent a peaceful Sunday at Union Point Park, enjoying its river views and watching the families playing along the riverbank. Impressed by the caretaking of the properties, we came to believe