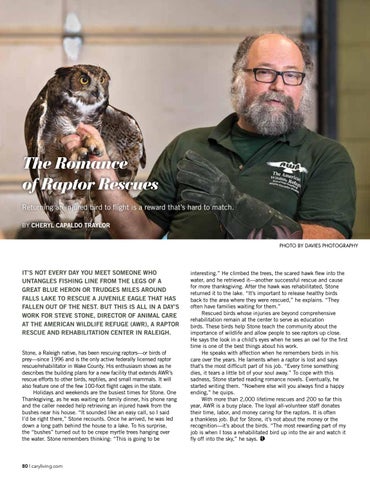 The Romance of Raptor Rescues Returning an injured bird to flight is a reward that’s hard to match. BY CHERYL CAPALDO TRAYLOR PHOTO BY DAVIES PHOTOGRAPHY

IT’S NOT EVERY DAY YOU MEET SOMEONE WHO UNTANGLES FISHING LINE FROM THE LEGS OF A GREAT BLUE HERON OR TRUDGES MILES AROUND FALLS LAKE TO RESCUE A JUVENILE EAGLE THAT HAS FALLEN OUT OF THE NEST. BUT THIS IS ALL IN A DAY’S WORK FOR STEVE STONE, DIRECTOR OF ANIMAL CARE AT THE AMERICAN WILDLIFE REFUGE (AWR), A RAPTOR RESCUE AND REHABILITATION CENTER IN RALEIGH. Stone, a Raleigh native, has been rescuing raptors—or birds of prey—since 1996 and is the only active federally licensed raptor rescue/rehabilitator in Wake County. His enthusiasm shows as he describes the building plans for a new facility that extends AWR’s rescue efforts to other birds, reptiles, and small mammals. It will also feature one of the few 100-foot flight cages in the state. Holidays and weekends are the busiest times for Stone. One Thanksgiving, as he was waiting on family dinner, his phone rang and the caller needed help retrieving an injured hawk from the bushes near his house. “It sounded like an easy call, so I said I’d be right there,” Stone recounts. Once he arrived, he was led down a long path behind the house to a lake. To his surprise, the “bushes” turned out to be crepe myrtle trees hanging over the water. Stone remembers thinking: “This is going to be

interesting.” He climbed the trees, the scared hawk flew into the water, and he retrieved it—another successful rescue and cause for more thanksgiving. After the hawk was rehabilitated, Stone returned it to the lake. “It’s important to release healthy birds back to the area where they were rescued,” he explains. “They often have families waiting for them.” Rescued birds whose injuries are beyond comprehensive rehabilitation remain at the center to serve as education birds. These birds help Stone teach the community about the importance of wildlife and allow people to see raptors up close. He says the look in a child’s eyes when he sees an owl for the first time is one of the best things about his work. He speaks with affection when he remembers birds in his care over the years. He laments when a raptor is lost and says that’s the most difficult part of his job. “Every time something dies, it tears a little bit of your soul away.” To cope with this sadness, Stone started reading romance novels. Eventually, he started writing them. “Nowhere else will you always find a happy ending,” he quips. With more than 2,000 lifetime rescues and 200 so far this year, AWR is a busy place. The loyal all-volunteer staff donates their time, labor, and money caring for the raptors. It is often a thankless job. But for Stone, it’s not about the money or the recognition—it’s about the birds. “The most rewarding part of my job is when I toss a rehabilitated bird up into the air and watch it fly off into the sky,” he says. L 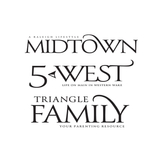