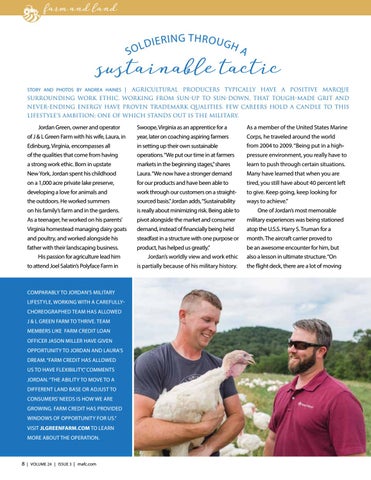 SURROUNDING WORK ETHIC. WORKING FROM SUN-UP TO SUN-DOWN, THAT TOUGH-MADE GRIT AND NEVER-ENDING ENERGY HAVE PROVEN TRADEMARK QUALITIES. FEW CAREERS HOLD A CANDLE TO THIS LIFESTYLE’S AMBITION; ONE OF WHICH STANDS OUT IS THE MILITARY.

Swoope, Virginia as an apprentice for a

As a member of the United States Marine

of J & L Green Farm with his wife, Laura, in

Corps, he traveled around the world

in setting up their own sustainable

of the qualities that come from having

operations. “We put our time in at farmers

pressure environment, you really have to

markets in the beginning stages,” shares

learn to push through certain situations.

Laura. “We now have a stronger demand

Many have learned that when you are

for our products and have been able to

tired, you still have about 40 percent left

developing a love for animals and

work through our customers on a straight-

to give. Keep going, keep looking for

the outdoors. He worked summers

on his family’s farm and in the gardens.

is really about minimizing risk. Being able to

As a teenager, he worked on his parents’

pivot alongside the market and consumer

military experiences was being stationed

demand, instead of financially being held

atop the U.S.S. Harry S. Truman for a

and poultry, and worked alongside his

steadfast in a structure with one purpose or

month. The aircraft carrier proved to

father with their landscaping business.

product, has helped us greatly.”

be an awesome encounter for him, but

COMPARABLY TO JORDAN’S MILITARY LIFESTYLE, WORKING WITH A CAREFULLYCHOREOGRAPHED TEAM HAS ALLOWED J & L GREEN FARM TO THRIVE. TEAM MEMBERS LIKE FARM CREDIT LOAN OFFICER JASON MILLER HAVE GIVEN OPPORTUNITY TO JORDAN AND LAURA’S DREAM. “FARM CREDIT HAS ALLOWED US TO HAVE FLEXIBILITY,” COMMENTS JORDAN. “THE ABILITY TO MOVE TO A DIFFERENT LAND BASE OR ADJUST TO CONSUMERS’ NEEDS IS HOW WE ARE GROWING. FARM CREDIT HAS PROVIDED WINDOWS OF OPPORTUNITY FOR US.” VISIT JLGREENFARM.COM TO LEARN MORE ABOUT THE OPERATION.

Jordan’s worldly view and work ethic is partially because of his military history.

One of Jordan’s most memorable

also a lesson in ultimate structure. “On the flight deck, there are a lot of moving