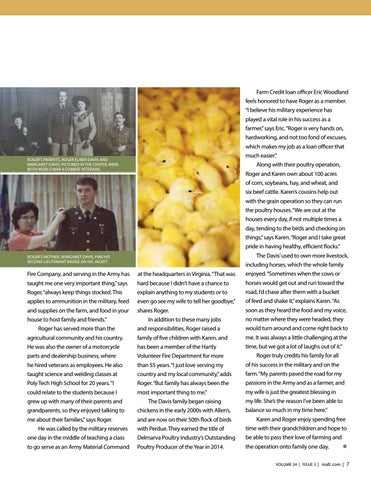 Fire Company, and serving in the Army has taught me one very important thing,” says Roger, “always keep things stocked. This applies to ammunition in the military, feed and supplies on the farm, and food in your house to host family and friends.” Roger has served more than the agricultural community and his country. He was also the owner of a motorcycle parts and dealership business, where he hired veterans as employees. He also taught science and welding classes at Poly Tech High School for 20 years. “I could relate to the students because I grew up with many of their parents and grandparents, so they enjoyed talking to me about their families,” says Roger. He was called by the military reserves one day in the middle of teaching a class to go serve as an Army Material Command

at the headquarters in Virginia. “That was hard because I didn’t have a chance to explain anything to my students or to even go see my wife to tell her goodbye,” shares Roger. In addition to these many jobs and responsibilities, Roger raised a family of five children with Karen, and has been a member of the Hartly Volunteer Fire Department for more than 55 years. “I just love serving my country and my local community,” adds Roger. “But family has always been the most important thing to me.” The Davis family began raising chickens in the early 2000s with Allen’s, and are now on their 50th flock of birds with Perdue. They earned the title of Delmarva Poultry Industry’s Outstanding Poultry Producer of the Year in 2014.

Farm Credit loan officer Eric Woodland feels honored to have Roger as a member. “I believe his military experience has played a vital role in his success as a farmer,” says Eric. “Roger is very hands on, hardworking, and not too fond of excuses, which makes my job as a loan officer that much easier.” Along with their poultry operation, Roger and Karen own about 100 acres of corn, soybeans, hay, and wheat, and six beef cattle. Karen’s cousins help out with the grain operation so they can run the poultry houses. “We are out at the houses every day, if not multiple times a day, tending to the birds and checking on things,” says Karen. “Roger and I take great pride in having healthy, efficient flocks.” The Davis’ used to own more livestock, including horses, which the whole family enjoyed. “Sometimes when the cows or horses would get out and run toward the road, I’d chase after them with a bucket of feed and shake it,” explains Karen. “As soon as they heard the food and my voice, no matter where they were headed, they would turn around and come right back to me. It was always a little challenging at the time, but we got a lot of laughs out of it.” Roger truly credits his family for all of his success in the military and on the farm. “My parents paved the road for my passions in the Army and as a farmer, and my wife is just the greatest blessing in my life. She’s the reason I’ve been able to balance so much in my time here.” Karen and Roger enjoy spending free time with their grandchildren and hope to be able to pass their love of farming and the operation onto family one day. l VOLUME 24 | ISSUE 3 | mafc.com |