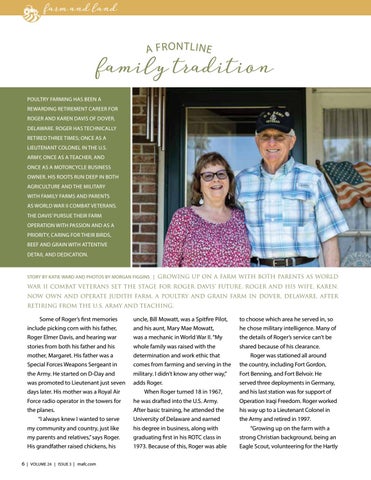 family tradition POULTRY FARMING HAS BEEN A REWARDING RETIREMENT CAREER FOR ROGER AND KAREN DAVIS OF DOVER, DELAWARE. ROGER HAS TECHNICALLY RETIRED THREE TIMES; ONCE AS A LIEUTENANT COLONEL IN THE U.S. ARMY, ONCE AS A TEACHER, AND ONCE AS A MOTORCYCLE BUSINESS

OWNER. HIS ROOTS RUN DEEP IN BOTH

AGRICULTURE AND THE MILITARY

WITH FAMILY FARMS AND PARENTS

OPERATION WITH PASSION AND AS A PRIORITY, CARING FOR THEIR BIRDS, BEEF AND GRAIN WITH ATTENTIVE DETAIL AND DEDICATION.

WAR II COMBAT VETERANS SET THE STAGE FOR ROGER DAVIS’ FUTURE. ROGER AND HIS WIFE, KAREN, NOW OWN AND OPERATE JUDITH FARM, A POULTRY AND GRAIN FARM IN DOVER, DELAWARE, AFTER RETIRING FROM THE U.S. ARMY AND TEACHING.

Some of Roger’s first memories include picking corn with his father, Roger Elmer Davis, and hearing war stories from both his father and his mother, Margaret. His father was a Special Forces Weapons Sergeant in the Army. He started on D-Day and was promoted to Lieutenant just seven days later. His mother was a Royal Air Force radio operator in the towers for the planes. “I always knew I wanted to serve my community and country, just like my parents and relatives,” says Roger. His grandfather raised chickens, his 6

uncle, Bill Mowatt, was a Spitfire Pilot, and his aunt, Mary Mae Mowatt, was a mechanic in World War II. “My whole family was raised with the determination and work ethic that comes from farming and serving in the military. I didn’t know any other way,” adds Roger. When Roger turned 18 in 1967, he was drafted into the U.S. Army. After basic training, he attended the University of Delaware and earned his degree in business, along with graduating first in his ROTC class in 1973. Because of this, Roger was able

to choose which area he served in, so he chose military intelligence. Many of the details of Roger’s service can’t be shared because of his clearance. Roger was stationed all around the country, including Fort Gordon, Fort Benning, and Fort Belvoir. He served three deployments in Germany, and his last station was for support of Operation Iraqi Freedom. Roger worked his way up to a Lieutenant Colonel in the Army and retired in 1997. “Growing up on the farm with a strong Christian background, being an Eagle Scout, volunteering for the Hartly