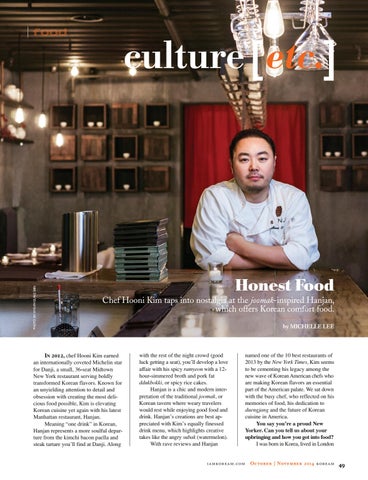 with the rest of the night crowd (good luck getting a seat), you’ll develop a love affair with his spicy ramyeon with a 12hour-simmered broth and pork fat ddukbokki, or spicy rice cakes. Hanjan is a chic and modern interpretation of the traditional joomak, or Korean tavern where weary travelers would rest while enjoying good food and drink. Hanjan’s creations are best appreciated with Kim’s equally finessed drink menu, which highlights creative takes like the angry subak (watermelon). With rave reviews and Hanjan i amkoream.com

named one of the 10 best restaurants of 2013 by the New York Times, Kim seems to be cementing his legacy among the new wave of Korean American chefs who are making Korean flavors an essential part of the American palate. We sat down with the busy chef, who reflected on his memories of food, his dedication to duengjang and the future of Korean cuisine in America. You say you’re a proud New Yorker. Can you tell us about your upbringing and how you got into food? I was born in Korea, lived in London Octobe r | Nove m be r 2014 koream

“No matter what kind of food we’d like to cook, ultimately the best food we’re gonna cook has to come from within. There is that honesty.” until I was 10, and I’ve been in New York City ever since. My mom didn’t cook—she had, and still has, her own company, so she was busy. At the time I went to Bronx Science, which is a public high school, and to get the private school girls, you would try to take them to fancy restaurants (laughs). I remember my very first fine dining experience was at Bordeaux. And I fell in love [with the food]. I still at the time didn’t cook. But that’s when I started becoming a foodie and enjoyed eating good food, whether it be fine dining or just very casual. You attended medical school. At what point did decide to switch to culinary school? What was that internal change that took place? I went to medical school, got married, [was] about to graduate, but I took a year sabbatical because I was going to apply to neurosurgery, which was a six-year residency at the time—and that’s when I [decided to go] to culinary school. I hated the hospital. I wasn’t exposed to the whole patient-doctor relationship part of medicine until it was too late, until I started medical school. I would follow doctors around, and sometimes there wasn’t much you can do. It was

neurosurgery. It was gunshots and stab wounds. When I really started talking to patients, it was just very depressing every day, and I had to take it home with me. I just couldn’t. This work [I do now] is easy in that there’s nothing you can do when you’re not in the restaurant. See, when the customers are in, that’s show time, we do our best. [After] the last customer leaves, we don’t have to worry about anything because ultimately our job is to make sure the customers have a good time. Did you get some negative feedback from your Korean family for leaving medicine? Oh yeah, my mom didn’t speak to me for a year—and my mom still has issues. But she’s … happy that I’m happy. After attending the French Culinary Institute, you trained at Daniel, the top French, Michelin-starred restaurant in New York. How difficult was it to make that transition into the culinary field? If Daniel didn’t offer me a job, I probably would’ve gone back to school. Daniel is where people worked for free. People were lined up at their door just to get their foot inside. So, when they offered me a job, it was sort

of like, “Really? Can I be a professional cook? Get paid to cook in one of the best restaurants in the country?” You had this rigorous training in French and Japanese cuisine. Why Korean food? I remember cooking French food at Daniel. I got to be pretty good, but you could see the French kids cooking French food, they had a different kind of passion. They had this pride. And they loved the fact that a non-French person would learn how to cook their food. But it was different. I didn’t have that pride cooking French food, nor did I have pride cooking Japanese food. You know, for me, it’s technique, I’m learning something from them, but this isn’t who I am. No matter what kind of food we’d like to cook, ultimately the best food we’re gonna cook has to come from within. There is that honesty. Hanjan is awesome because it’s reminiscent of the food stalls you would find walking down the streets in Korea. You have ddukbokki and it’s familiar, yet you’ve made it upscale. What’s your philosophy? Yes, Korean food is what people think I cook, but every dish is so personal. And ultimately, when I decide to put something on the menu, I have to feel—I don’t have to be right, but I have to feel and think this is the best version. If I didn’t think my ddukbokki was the best, if I thought somebody was making it better, I wouldn’t put it on the menu.

culture [ etc.] So, making Korean food more mainstream? More New York. More American. The flavors are exotic, and a lot of thought went into making everything on the menu, but we also thought about how to present them visually that’s not so exotic. Flavor-wise, it’s there. We use five ingredients from Korea. For Hanjan, I wanted to be a little bit more authentic, flavor-wise, whereas [with] Danji, it’s the Korean American side of me. What are the five ingredients? Gochugaru (red chili pepper powder), gochujang (red pepper paste), duengjang (soybean paste), ganjang (soy sauce), and chamgireum (sesame oil). Those five we get artisanally made in Korea, and with those five ingredients, we really use the flavors, especially with our duengjang. Everything is handmade, so our duengjang every year or within the same year, the flavor is different because of the hangari, or clay pot it’s stored in. How does the flavor change? Hangari is how you store the duengjang. [The pot is] made out of clay, so it’s breathable. So depending on how much sun that it gets, the flavors will be either more or less concentrated. The only thing that goes into duengjang— you might think that it’s so complex, but it’s just soybean, salt, water. It’s those three ingredients, time and nature. The rain, the sun, the wind—all of that affects it. … It’s like a cabernet, where you taste it, and that finish, it just grows. And there’s complexity, and it’s telling you a story with one sip! And after 30 seconds, you’re like,

wow, that was good! Whereas, [with] a cheap glass of wine, after five seconds it disappears. But that is jang, Korean jang (thick sauce). Anything that is fermented, it takes time. So it should tell a story. It should tell art, of course … what kind of weather that year. Unfortunately supermarket products, it tastes similar, but it doesn’t have that finish. How were you connected with Korean food growing up in a nonculinary family? So every summer, since I think I was like 5 or 6, my mom sent me to Korea. Every summer I would visit both my mom’s and dad’s sides [of the family]. Especially on my dad’s side, they lived on a small island, so the home-cooked meals there, they would catch their own seaweed, dry it, and make salted dried seaweed out of it. And the rice, the island had a communal rice patch where everybody helped plant and harvest the rice, and that’s what you would eat. That’s amazing. So you’re kind of drawing on your personal history for your food. I had forgotten about all of that for the longest time until I started cooking, and then, you know, magically, it comes back. I totally forgot all the banchan [side dishes] that I had when I was 10 years old. But it does come back. It is in there somewhere. Food memory is powerful—like you’ll never forget your mom’s cooking. Hanjan taps into that because it’s total comfort food. And that’s my biggest compliment. It’s like music. You can do it, and the

point of every song is to move somebody emotionally. To us [chefs], there is no real sadness, happiness. It’s nostalgia that we want to tap into. What is your best advice to young chefs aspiring to have their own restaurant? Humility. The more you learn about cooking, you realize there’s so much more to learn. There’s never a perfect restaurant. The best way is to constantly learn from the people around you—the dishwashers, the bartender, the front of the house, managers, everybody. They all know information that will make the food and restaurant better. Where do you think the trend of Korean food is heading? It’s got to be chef-ownership. If a chef owns the restaurant, it’s his reputation on the line. It’s more about the cooking and the food. You want to show people, this is real Korean food, and that’s the only way a cuisine develops. That happened with Japanese food. When they first came here it was a cheap place to get fish. But the chefs coming in said, “No, California rolls aren’t real sushi. This is real sushi,” and look where Japanese food is now. We need to do that with Korean food. What’s next for Hooni Kim? I have a cookbook coming out next fall, with stories about the inspirations. It’s written. Norton is publishing it. And it’s Maria Guarnaschelli, who edited The Joy of Cooking and is one of the most difficult people to please. But she’s happy with it, so I think it’s going to be a good book. 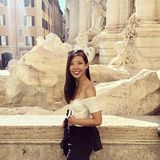