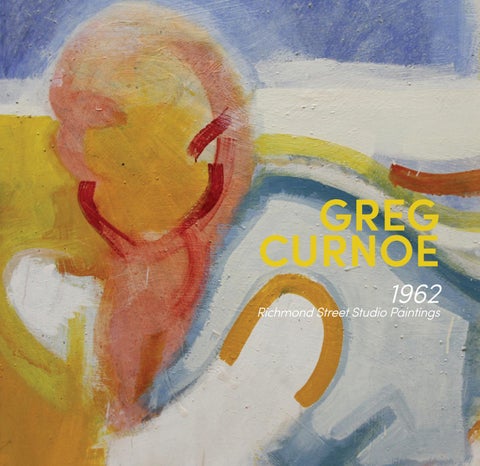 hen handling or developing an artist’s estate, you must look into who they were as a human being and what their influences were. I was born in 1958 and Greg secured his first proper studio in 1960, coincidentally across from our gallery on Carling Street. For our Fall exhibition, we have chosen a very specific two year period of Greg’s life – post-Elvis and pre-Beatles. The future was bright for Greg and so were Greg’s paintings!

n May 1960, Greg Curnoe failed his final year at the Ontario College of Art and returned home to London, Ontario. Wanting to establish a proper artist studio, Curnoe rented a large 45 x 18 foot sky-lit space on the 3rd floor at 432 Richmond Street. At this time in conservative London, setting up a professional artist’s studio was uncommon. Curnoe’s father thought he would go broke and last three weeks and friends were amazed at his ambition to pay for a space that was a studio for artwork instead of a place to live in. Greg Curnoe, determined that artists could be “good” even outside of New York or Toronto, started his life as a serious artist working in downtown London.

“He began to make assemblages of found objects, collages of bus transfers, theatre tickets, objects discarded by friends. He built large free standing painted constructions and did life-sized paintings of people on sheets of plywood. He incorporated the processes of childhood play that had earlier been so satisfactory: speech balloons, cartoon-like drawings, rubber-stamp labelling, the keeping of lists of important objects and events, the assignation of importance to such everyday things as O Pee Chee chewing gum wrappers and Bon Ami cleanser labels. He renewed old friendships and sought out new people in the university and the community at large. His studio became a centre of intellectual activity where ideas were discussed and plots were hatched.” John Boyle, 1993

“This funny kid came to town who was determined to be a professional painter and who would rent a studio, like he would pay rent for it and it was not an apartment, it was a studio.” Don Vincent, 1979

“My mother worried quietly and would pass on my dad’s concerns about me, which were also hers to some extent... He insisted that I should get a job in commercial art. He thought I was crazy to go to art college. He told me that I would last three weeks in my studio downtown (this was when I was twenty-four years old) because I wouldn’t be able to pay the rent etc. etc.” Greg Curnoe, 1990

he Richmond Street studio became an active place with academics, artists and musicians stopping in at all times of the night or day. Curnoe became one of the main components in the heightened energy in the city and the idea of Regionalism emerges. This is also an important time in the development of Curnoe’s identity as an artist and community organizer. Between 1960 and 1962, Curnoe: * Co-founds Region Magazine, an artist-led hand-typed magazine of poetry, reviews and articles about the London area. * Has his first solo exhibition “An Exhibition of Things” at the Richard E. Crouch Branch Library, which included constructions, paintings and a ticket booth “for the kids”. * Shows in a group show, “Untitled NeoDada”, at Isaacs Gallery in Toronto. The other artists included were Arthur Coughtry, Dennis Burton, Michael Snow, Gordon Rayner, Richard Gorman and Joyce Wieland. * Meets Jack Chambers and Michael Snow, fellow artists who would become great friends.

* Co-organizes “The Celebration”, the first art happening in Canada. The event, which took place at the London Public Library, was part parade / part performance where people did their laundry, built a large wooden structure and watched a hockey game in the gallery. To make ends meet at this time, Curnoe took various jobs working at the post office, Survey Department, delivering Coca-Cola and teaching artist workshops.

Greg Curnoe at his “An Exhibition of Things” at the Richard E. Crouch Library, 1961

n the two years that Greg worked in the Richmond Street studio, he was quite prolific and experimented with hot colours, simplified forms and graphic techniques. 1962 was also the year that Curnoe made his first major sale to a Canadian public art gallery. “Tall Girl When I am Sad on Dundas Street” was first exhibited in the “7th Annual Winnipeg Show” at the Winnipeg Art Gallery. It won a $100 prize for painting and was purchased by the Norman Mackenzie Art Gallery in Regina in 1962. The painting is similar to the paintings included in our exhibition in its looseness, bold colour and focus on the curvature of the female form. Other figurative paintings painted during the same time are now in the Art Gallery of Ontario and National Gallery of Canada (illustrated on the following page).

Tall Girl When I am Sad on Dundas Street Oil on Masonite, 1961 72 x 48 in. Collection MacKenzie Art Gallery, Regina

he Richmond Street studio is the first time Curnoe is free from the constraints of his OCA teachers and is also where he began making these large life-sized figurative paintings. The exciting, innovative, large figurative paintings and series of Day-Glo painted “Walking Women” works on paper are the focus of this exhibition and catalogue. They are loose, highly gestured, at times graphic, raw and of course intensely colourful. They reflect Curnoe’s interest in recording the people and events in his daily life as well as his fascination with the shape and curve of the female body. The paintings also, with their flat areas of vibrant colour and swinger sexuality, show Curnoe’s strong affinity to British Pop art and music.

details of “Untitled (Female in Repose)”

“Thinking a lot last night… about walking women – the Day-Glo ones I did in the late spring of 1960 and the earlier ones at the college of art – and how Coughtry and De Kooning and Kirchner were in me then – and how Mike Snow came up in late ’60 or early ’61 and saw them and around that time started the walking women works – a very different proposition from what I was doing.” Greg Curnoe, 1969

reg Curnoe’s “Walking Woman” paintings included in our exhibition are influenced by 1960s Pop Art and De Kooning’s nudes. They also are the foundation for a subject that Curnoe would focus on for the rest of his career. For Curnoe, the figure became an important subject from the early pop-inspired paintings through to his self-portraits and countless paintings of his muse and wife Sheila. The Richmond Street studio paintings in particular, reveal a freshness and unbridled optimism of a young 26-year-old artist starting out. There is a creative intensity that 432 Richmond Street captured, an energy that shaped Greg Curnoe as an artist.

n addition to the paintings of the female figure, Curnoe, at the time, was also painting everyday objects and his immediate surroundings. We have included dayglo paintings of his abstracted record player, snooker table and a spirited oil painting of a Race Car Driver. Painting the everyday gave him a constant source of material and also supported his concept of Regionalism: “Due to the mass media most people’s eyes and ears are on radio, TV and newspapers, and never or rarely on where they are. Because of this we can work without being bothered. Our way of working cannot be called a movement because each of us has many and severe reservations about the others’ works, and because we are not using regionalism as a gimmick but rather as a collective noun to cover what so many painters, writers, and photographers have used - their own environment something we don’t do in Canada very much.” Greg Curnoe, 1963

attended H. B. Beal Technical and Commercial High School in London and later studied art at Kitchener’s Doon School of Fine Arts (1956) and the Ontario College of Art in Toronto (1957-1960). Upon returning to London in 1960, Curnoe became a highly motivated artistcommunity organizer. He co-organized the first art “happening” (1962), co-founded Region Magazine (1961-90), Region Gallery (1962-63) and the Forest City Gallery (1973- ). He also played a key role in the founding of the Nihilist Spasm Band (1965), a collection of artists that created “music” on homemade instruments. In 1968, along with Jack Chambers, Tony Urquhart and Kim Ondaatje, Curnoe became one of the first members of CARFAC, an artist collective that advocates for artists’ rights. Beginning in the early 1960s, Curnoe exhibited extensively both nationally and internationally. In 1967, Curnoe received a prestigious mural commission for the Dorval International Airport in Montreal. He represented Canada at the Sao Paulo Bienal (1969) and at the Venice Biennale (1976). Curnoe’s artwork has been included in major exhibitions including “Heart of London” (1968) National Gallery of Canada, “Greg Curnoe: Retrospective” (1981) Musée des beaux-arts de Montréal and “Greg Curnoe: Life & Stuff” (2001) Art Gallery of Ontario. His artwork is included in the collections of the Art Gallery of Ontario, Musée des

beaux-arts de Montréal, Musée d’art contemporain de Montréal, National Gallery of Canada, Oakville Galleries, Vancouver Art Gallery and in many other prominent public and private collections. On November 14, 1992, Greg Curnoe was struck from behind while riding his bright yellow Mariposa bicycle with the London Centennial Wheelers. He was pronounced dead later that day at Strathroy Middlesex General Hospital. He is survived by his wife Sheila, children Owen, Galen and Zoe, brother Glen and sister Lynda.