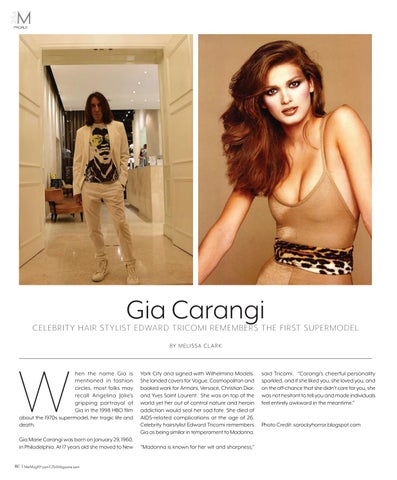 hen the name Gia is mentioned in fashion circles, most folks may recall Angelina Jolie’s gripping portrayal of Gia in the 1998 HBO film about the 1970s supermodel, her tragic life and death. Gia Marie Carangi was born on January 29, 1960, in Philadelphia. At 17 years old she moved to New

York City and signed with Wilhelmina Models. She landed covers for Vogue, Cosmopolitan and booked work for Armani, Versace, Christian Dior, and Yves Saint Laurent. She was on top of the world yet her out of control nature and heroin addiction would seal her sad fate. She died of AIDS-related complications at the age of 26. Celebrity hairstylist Edward Tricomi remembers Gia as being similar in temperament to Madonna. “Madonna is known for her wit and sharpness,”

said Tricomi. “Carangi’s cheerful personality sparkled, and if she liked you, she loved you, and on the off-chance that she didn’t care for you, she was not hesitant to tell you and made individuals feel entirely awkward in the meantime.”