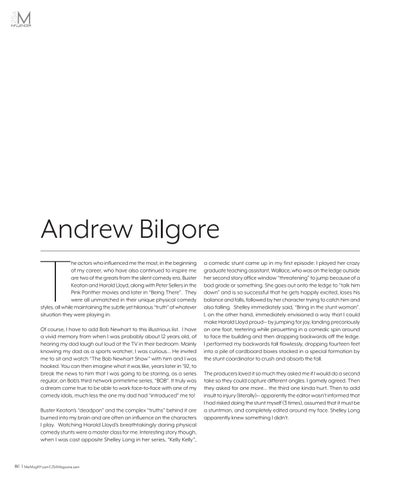 he actors who influenced me the most, in the beginning of my career, who have also continued to inspire me are two of the greats from the silent comedy era, Buster Keaton and Harold Lloyd, along with Peter Sellers in the Pink Panther movies and later in “Being There”. They were all unmatched in their unique physical comedy styles, all while maintaining the subtle yet hilarious “truth” of whatever situation they were playing in. Of course, I have to add Bob Newhart to this illustrious list. I have a vivid memory from when I was probably about 12 years old, of hearing my dad laugh out loud at the TV in their bedroom. Mainly knowing my dad as a sports watcher, I was curious... He invited me to sit and watch “The Bob Newhart Show” with him and I was hooked. You can then imagine what it was like, years later in ‘92, to break the news to him that I was going to be starring, as a series regular, on Bob’s third network primetime series, “BOB”. It truly was a dream come true to be able to work face-to-face with one of my comedy idols, much less the one my dad had “introduced” me to! Buster Keaton’s “deadpan” and the complex “truths” behind it are burned into my brain and are often an influence on the characters I play. Watching Harold Lloyd’s breathtakingly daring physical comedy stunts were a master class for me. Interesting story though, when I was cast opposite Shelley Long in her series, “Kelly Kelly”,

a comedic stunt came up in my first episode: I played her crazy graduate teaching assistant, Wallace, who was on the ledge outside her second story office window “threatening” to jump because of a bad grade or something. She goes out onto the ledge to “talk him down” and is so successful that he gets happily excited, loses his balance and falls, followed by her character trying to catch him and also falling. Shelley immediately said, “Bring in the stunt woman”. I, on the other hand, immediately envisioned a way that I could make Harold Lloyd proud-- by jumping for joy, landing precariously on one foot, teetering while pirouetting in a comedic spin around to face the building and then dropping backwards off the ledge. I performed my backwards fall flawlessly, dropping fourteen feet into a pile of cardboard boxes stacked in a special formation by the stunt coordinator to crush and absorb the fall. The producers loved it so much they asked me if I would do a second take so they could capture different angles. I gamely agreed. Then they asked for one more... the third one kinda hurt. Then to add insult to injury (literally)-- apparently the editor wasn’t informed that I had risked doing the stunt myself (3 times), assumed that it must be a stuntman, and completely edited around my face. Shelley Long apparently knew something I didn’t. 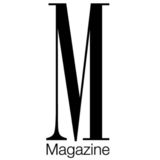