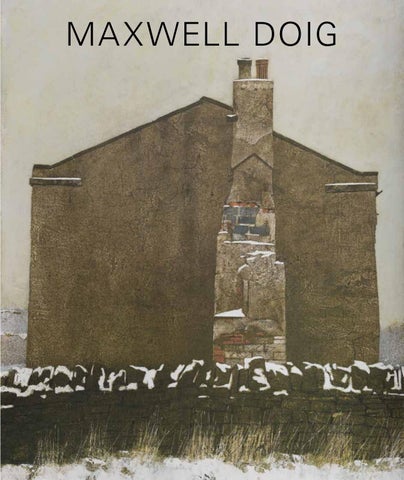 “I think loss can be beautiful, especially in architecture. It’s the face of the life within.”

Regarding Surface In England, we generally have two types of snow: the happy kind that arrives all at once, shifting moods and plans, if only for a day. Then there is the second kind of snow, the kind familiar to anyone in Yorkshire. Perhaps less festive, this snow is gentler and more evocative, because while it might not fall every year, when it does it lingers, icily weaving itself into the fabric of everyday life. Some of the best examples of this relationship between the human and the elemental endure in the old barns, mills and moorland houses of the West Riding, home to Maxwell Doig. “I’m still working on some of these”, Doig says, pulling out several pictures in the small, but well lighted studio

he’s fashioned out of an upstairs space in his Huddersfield home. Already hanging on the studio walls are several large paintings, some of which are obviously complete (and exquisitely so); others appear to be at that “almost” stage that is so exciting for the viewer and so nerveshredding for the artist. All of the pictures are typical of Doig’s style, which combines delicate colour, tone and texture to communicate a variety of equally subtle matter: fog, snow, sand and grass; the windswept wooden sides of beached boats and fishing huts, and the stony, metalfeatured faces of industrial architecture. Moreover, all of his pictures are potently atmospheric, and one, Newsome Mill in Snow (cat. no. 22) has a polar sense of contrast that asserts the building’s physical reality, while hinting at something intangible (but no less vital) that once lay within

Algernon Newton’s pictures: his hills and houses have such identity.” Likewise, Doig’s different aspects of the clock tower invite ideas of what this structure – the hub of a factory that ran for over 150 years – might have meant to the people who built it, to the people it governed, and maybe even to the people who walk past it today. Only two weeks after he completed many of these paintings, Newsome Mill, which was planned for a major redevelopment, was destroyed in a suspicious fire leaving little else but the clock tower. “I

its hammered-stone walls. “All of my buildings are actual places”, he explains. “But I tend to choose structures that are solitary or distinct.” Newsome Mill, a former Victorian textile works and a Huddersfield landmark, inspired several of Doig’s new pictures, each of which specifically focuses on the mill’s clock tower and its correspondence to the works’ remaining buildings. The paintings show a level of detail seldom found outside architectural plans, but are in no wise prosaic. In fact, depending on the direction of the tower, its broken faces variously appear to gaze down on the street; frown at the rusty water tank above, or even look levelly out of the picture. “I think loss can be beautiful, especially in architecture. It’s the face of the life within. I’ve always loved

caught it just in time and I’m glad I did. Just when you think something is permanent it disappears... Perhaps this is part of my job - to capture something before it disappears.” Doig’s eye for the spirit of past purpose that ‘haunts’ certain buildings (even in the most vital cities), creates architectural views that are almost palimpsests of their successive tenants: a subject that is directly connected to how he developed his distinctive technique. In fact, if painting is technically plastic – i.e. images formed from globs of pure, viscous colour – then Doig’s paintings are glyptic, because he develops his images through a process of taking away.

“As a kid, I actually wanted to be an archaeologist and in a curious way, that’s sort of what I do now with images and surfaces: I excavate until I find something.” Working primarily in acrylic, he builds layers of refined tone and colour over various coarser grounds, often mixed with sawdust or paint scrapings. “Once I have three or four layers built up, I scrape it back to the ground, hoping to find interesting textures that might suggest a wall, plastered, wooden, maybe dry-stone. Sometimes, I find nothing but marks and shapes I’d never even thought of, but then they lead to something else entirely.” It is a technique that Doig evolved over several decades and largely on his own terms, although he credits David Blackburn for guiding his draughtsmanship and stressing its primacy. Speaking with Andrew Stewart in 2012, Doig

overlooked follows in the tradition of Grand Tour painters like Thomas Jones, whose work Doig knows and admires. But as Algernon Newton once pointed out: “A gasometer can make as beautiful a picture as a palace on the Grand Canal… It simply depends on the artist’s vision.” Indeed, one of Doig’s pictures that best captures his holistic sense of architecture is Gasometer II (cat. no. 36), where his “magichour” play of light on the Victorian ironwork highlights its elegance, but perhaps also its obsolescence. This sharp eye belies Doig’s warm intellectual generosity, and unlike some painters, he could never be accused of foregrounding himself. But somehow, he is still present in many of these works, like a shadow in a photograph cast by the person behind the camera. Andrea Gates director

recalled his long friendship with Blackburn, whom he met in 1984: “His influence was crucial. He taught me how to draw and showed me the importance of form and structure, all of which are still central concerns today. Doig’s insight into how we read certain types of buildings as avatars – how a clocktower can shout pride while reminding us that time has the last word, or, depending on how we view solitude, a lone beach hut can evoke haven or exile. His sense for the beauty and subtlety of the

Maxwell Doig in his etching studio

All rights reserved. No part of this publication may be transmitted in any form or by any means, electronic or mechanical, including photocopy, recording, or any information storage and retrieval system, without the prior permission in writing from the publisher. The Studio, Lords Wood, Marlow, Buckinghamshire. Tel: 01628 486565 www.messums.com Photography: Richard Littlewood Printed by DLM-Creative